At the start of Barack Obama’s presidency, I came to know a routine all too well. President Obama or his top aides would seek to dismiss a reporter’s question about the news of the day—be it attempts to revive the struggling economy after the 2008 collapse, the tricky politics of a Wall Street bailout or the efforts to keep American automakers’ assembly lines roaring—by reminding everyone just how bad things were when the Obamas moved into the White House. It wasn’t always explicit, but the message was clear: they were cleaning up the mess left behind by President George W. Bush after eight turbulent years.

My editor would ask the obvious question: “Does Dallas want to comment?” Meaning the office of the 43rd President in Texas.

Invariably, the answer was a polite no. Bush understood the pressures facing any President and had learned over his career that nothing should be taken personally in politics—especially once you got to the nation’s highest office. Picking a public fight with his successor would do him—and the country—no good at unifying around its first Black President. Even when Team Obama stretched credulity on the scope of the mess, the answer stayed the same: Bush’s aides would decline to comment and thank us for the call.

That’s what is expected of former Presidents and their families. They can work on causes of varying political intensities, but they generally don’t return to the day-to-day scramble of politics. Politics still intrudes occasionally, of course. Bill Clinton campaigned for Hillary Clinton during her 2008 and 2016 presidential campaigns, Bush supported his brother Jeb’s candidacy in 2016, and Barack and Michelle Obama both helped Joe Biden on his path to the White House. But in the interest of maintaining the quiet dignity of an ex-President, those instances are the exception rather than the rule.

That’s not to say they face exile. During his post-presidency, Bush has worked to help veterans and Laura Bush remains a fierce advocate for literacy. Bill Clinton set out to establish a foundation with a truly global reach while Hillary Clinton traded the White House’s Solarium for the Senate Cloak Room and later the State Department. In their post-White House years, Barack and Michelle Obama have been diligent advocates for voting rights and jobs-training programs in Chicago. And if called back to help out their fraternity’s current occupant of the Oval Office, former Presidents often do it; the Clinton-Bush Haiti Fund raised more than $50 million to help Obama with a post-earthquake recovery.

Former President Donald Trump’s return to the campaign trail over the weekend, however, broke many of the unwritten rules of the office. “Do you miss me?” Trump asked his crowd near Cleveland on Saturday evening at his first public, standalone political event since leaving office in January. The 90-minute remarks were a rehash of his old grievances, lies and attacks. His grip on the Republican Party appears as strong as ever, with 36% of Republicans buying the incorrect belief that Trump actually won in November and 57% of them saying Biden won only through election fraud, according to polling released last week from Monmouth University. The fact the question is even necessary shows how potent Trump remains in his party.

For those who like an evening of fact-optional assertions, petty attacks on those who dare disagree with him and baseless theories of massive voting fraud, Trump still brings the show. He played his greatest hits: anti-immigrant rhetoric recited through the lyrics of 1960s pop song “The Snake,” chants of “lock her up” related to Hillary Clinton’s email practices and a maddening lack of Internet connectivity for reporters who traveled to Ohio to witness Trump’s latest roadshow.

The new material came as Trump campaigned against an incumbent Republican, Rep. Anthony Gonzalez of Ohio, who dared to vote for Trump’s second impeachment following a deadly insurrection at the U.S. Capitol on Jan. 6. Trump went to his district for his first post-White House rally to drum up support for a Trumpist who is running against Gonzales in a GOP primary. For Trump, that failed attack on democracy back in January was nothing to worry about. In fact, many in the crowd wrongly believe Trump is still the valid President and will be restored to power in August, according to the Associated Press’ reporter on the ground.

Still, Trump may find on his return to the trail that his rallies lack the utility they once held. Out of power, Trump now has to work a little harder to drum up relevance. World leaders no longer have to monitor his every utterance for hints as to U.S. policy. He is banned from Twitter and Facebook, denying him direct access to his loyalists, and his blog proved short-lived. Lacking a campaign, Trump has had to turn to political action committees and his own wallet to cover the costs of the elaborate rallies. And while he still has Secret Service protection, ex-Presidents don’t get the same trappings of the White House’s aura.

Which is why Trump faces this reality: in order to matter to anyone outside his hardcore supporters, he needs to turn up the volume to draw widespread attention. It’s how he won the nomination in 2016, by spending a lot of time denouncing every living President before him and then picking a fight with the Pope for good measure. His opponents, put simply, didn’t know how to parry. Even at the most deafening days of outrage during Trump’s term, you had to listen really, really carefully to hear criticism of it from the former Presidents. For months, in fact, Obama wouldn’t even say Trump’s name, even as Trump refused to host the Obamas for portrait unveilings.

Now, Trump’s broadsides against Biden are just words. Which is why he’s planning a trip to the U.S. border on Wednesday with Republican lawmakers. He’s going not to highlight the challenges facing U.S. officials struggling to cope with a surge of immigrants, but to troll Biden. Since Trump first rode down that golden escalator back in June of 2015, he has gleefully sucked up all of the oxygen he can from every situation. His post-White House posture is simply more of the same. Still, it can’t help but shock those of us who watched every other former President check his impulses and even his ego to make room for his successor. That’s simply not in Trump’s DNA. He didn’t learn the norms when he was the sitting President, so there’s no reason to think he’ll pick up the cues now. 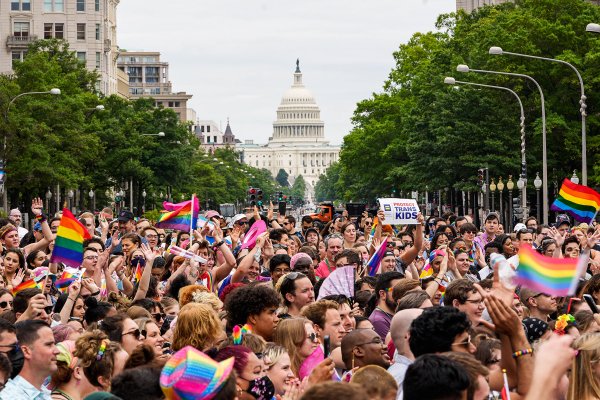 This is the Queerest Congress Ever. Will It Advance LGBTQ Rights?
Next Up: Editor's Pick