Iran missed a midnight deadline to renew its temporary atomic-monitoring pact with international inspectors, raising the prospect that it could delete sensitive enrichment information and complicating broader negotiations in Vienna to revive its nuclear accord with world powers.

The Iranian government has said it would decide whether to renew the agreement only after it expired. It let a previous deadline lapse by 24 hours last month before agreeing to extend the pact, which preserves video and enrichment data captured at Iranian nuclear installations.

Intrusive inspections by the International Atomic Energy Agency were originally seen as the centerpiece of Iran’s landmark 2015 agreement with world powers, which verifiably rolled back its nuclear activities in exchange for sanctions relief. The Islamic Republic gradually began to ramp up its enrichment and other work after U.S. President Donald Trump abandoned the accord three years ago, reimposed sanctions and added new penalties to strangle the Iranian economy.

Tehran began restricting other types of IAEA monitoring from February and has threatened to permanently delete the information on its nuclear activities depending on the outcome of wider discussions over sanctions relief. It could use the expiry of its arrangement with international inspectors as leverage in those talks.

IAEA Director General Rafael Mariano Grossi has been warning for weeks that failure to extend the pact would degrade international understanding of Iran’s nuclear program just as the country massively steps up uranium enrichment with advanced new technologies.

“When you get into this kind of activity you must have commensurate inspections,” said Grossi, emphasizing that unless his inspectors are given wider access, international knowledge of Iran’s work is only an “illusion.”

U.S. negotiators led by Robert Malley are preparing to return to the Austrian capital for a seventh round of indirect talks with Iran on restoring the 2015 deal as early as next week. However, that date could also be pushed back if Tehran’s leadership isn’t ready to engage, according to another official, who asked not to be identified discussing private deliberations.

A senior State Department official said the U.S. and Iran still have important issues to be resolved, tamping down speculation that an agreement is imminent.

Washington wants the deal to include an agreement by the U.S. and Iran to enter a new round of talks to address what the Biden administration has called its desire for a “longer and stronger” understanding on what the U.S. views as Iran’s malign activity along with its ballistic missile program.

Potentially complicating negotiations is the election earlier this month of a hardline cleric, Ebrahim Raisi, to succeed Hassan Rouhani, a champion of the original accord, as president of Iran. Raisi, who takes over in August, is due to give a televised interview later Friday.

The longer the talks drag on, the harder it will become to reinstate the same safeguards preventing Iran from breaking out of a deal and rapidly assembling a weapon, according to one European diplomat briefed on the matter, who asked not to be identified because the negotiations are private.

The original accord ensured Iran would need at least a year to accumulate the nuclear material and expertise needed to construct a weapons. However, engineers and scientists have gained significant knowledge in the two years since the Islamic Republic broke its nuclear covenants in response to U.S. sanctions, an enduring legacy of Trump’s decision to leave the deal, the diplomat said.

—With assistance from Yasna Haghdoost. 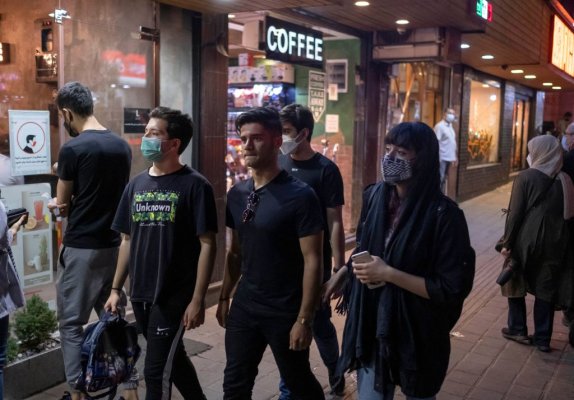 Iran Is Too Often Viewed Through the Lens of Our Rulers. Try Looking Through the Eyes of Our People
Next Up: Editor's Pick