The Trump-Era 'Remain in Mexico' Policy Is Winding Down. But More Than 4,600 Are Left Out

Gabriela Fajardo speaks on the phone before beginning her class at her home in Matamoros, Mexico, on May 25, 2021. Fajardo, a teacher, is also one of about 4,600 people who do not qualify for the Biden Administration's "phase 2" unwinding of the Trump Administration's Migrant Protection Protocols.
Sergio Flores—AFP/Getty Images
By Jasmine Aguilera

Amid a dizzying crowd of migrants sheltering at Iglecia Embajadores de Jesus (Ambassadors of Christ church) in Tijuana, 26-year-old Gabriela Fajardo begins running toward the door with her 5-year-old son, Josseph, in hand. She’s racing toward two colleagues, who are here to take Fajardo and her boy back to Matamoros, Mexico—the closest thing to home the mother and son have had in nearly two years.

Fajardo, a teacher who is originally from Honduras, doesn’t speak English, and Felicia Rangel-Samponaro—one of the co-directors of The Sidewalk School, a Matamoros, Mexico-based nonprofit where Fajardo works—is still trying to learn Spanish. But on this day in late April the two share a long embrace and Fajardo begins crying, happy and relieved that she will soon be leaving Tijuana. It’s a city she had never been to before, but found herself stranded in after being “expelled” there by the U.S. government because of a Trump-era rule known as Title 42, which allows border officials to immediately return people who attempt to cross the border unauthorized or to make a claim for asylum because of the risks posed by COVID-19.

“I got on a bus thinking we were heading for a detention center or a shelter,” she tells TIME shortly after her reunion with Rangel-Samponaro. “When I saw the buildings and houses changing, I thought ‘I don’t like it here.’ And then it was clear when I saw a sign that said ‘Tijuana,’ I started crying.”

Read more: Shelters From Reynosa to Tijuana Are at Capacity and Scrambling for Resources as the U.S. Continues to Expel Migrants

Fajardo’s expulsion to Tijuana and move back to Matamoros has been the latest in a years-long journey that saw her life thrust into uncertainty by some of the most consequential Trump-era immigration policies. Before she and her son were sent to Tijuana under Title 42, they had lived in Matamoros for nearly two years, part of that time under the Migrant Protection Protocols (MPP), which required asylum seekers like Fajardo to “Remain in Mexico” while their cases were decided in the U.S. Fajardo had an MPP case, but her asylum claim was denied in March 2020. She has continued to live in Matamoros with her partner, who has an open MPP case.

Tens of thousands of people impacted by MPP have begun to find hope, or at least an end to the uncertainty of waiting in Mexico, as the Biden Administration has been winding down the policy. The Administration stopped enrolling people into MPP in January, and has begun allowing people with an open MPP case to register for entry to the U.S. Now, it has entered what it calls “phase two” of the MPP wind-down, expanding the number of people allowed enter the U.S. to include those who were denied asylum because they missed their court hearings while stranded in Mexico. This category of people—which the Transactional Records Access Clearinghouse (TRAC), a data and research organization at Syracuse University says is 27,842 people—are now eligible to have their cases reopened and enter the U.S. while their case makes its way through the court system. An additional 6,686 people whose cases were thrown out by an immigration judge will also receive a second chance to have their case heard and wait it out in the U.S.

Fajardo and her son however, do not fall into either of these categories. Instead, they’re among the 4,668 people TRAC has identified who have already been denied asylum point-blank by a U.S. immigration judge and therefore do not qualify for the Biden Administration’s phase two wind-down. It’s a group of people who went through the asylum process—filed all of the paperwork, attended all of their immigration court hearings, often without a lawyer—and lost their case, says Fajardo’s lawyer, Erika Pinheiro, litigation and policy director at Al Otro Lado, a nonprofit legal and humanitarian aid organization based in Los Angeles, San Diego and Tijuana.

“For me it’s really disheartening that a relatively small number of people like [Fajardo] are being left out of this wind-down process,” Pinheiro says, “because they obviously suffered all the indignities that others have who are able to go through the process.”

Both Pinheiro and Austin Kocher, assistant research professor in the Newhouse School of Public Communication and a researcher at TRAC, question whether those like Fajardo who were able to attend their MPP asylum hearings, and ultimately lost, actually received a fair hearing. The COVID-19 pandemic shut down immigration courts, and made virtual MPP hearings commonplace. But many asylum seekers struggled to access the right technology, lawyers on the ground have told TIME, and in cases where the person does have access to technology, glitches and other failures have become a challenge during hearings. Prevalent violence against asylum seekers stranded in Mexican border cities also became a barrier to attendance, according to a report by Buzzfeed News.

“[The government’s] justification is that the person had due process because they had the opportunity to attend their hearing,” Pinheiro tells TIME. “But I would vehemently disagree with that because I worked on the ground with people in MPP—given the conditions they were living in…there’s no way you could effectively engage in your own defense.”

The Department of Homeland Security (DHS) “is fully committed to restoring the safe and orderly processing of individuals seeking to enter the United States,” a DHS spokesperson tells TIME in a statement. “DHS has implemented a phased approach to processing individuals into the United States who had been returned to Mexico under MPP, and to date nearly 13,000 individuals have been processed.” The DHS spokesperson referred TIME to the Department of Justice’s Executive Office For Immigration Review (EOIR), which adjudicates immigration cases, for comment about the fairness of asylum hearings. A spokesperson for EOIR tells TIME in a statement that it “responds to and addresses all specific case issues with the affected parties as they arise.”

“Further, EOIR is actively taking steps to communicate with the population of noncitizens who were part of the MPP, working to ensure their understanding of the immigration court process and options that may be available to them,” the agency spokesperson adds.

Kocher points to data showing that nationally between Oct. 1, 2019 and Sept. 30, 2020, nearly 30% of asylum cases were won in the U.S., and in the prior year, the grant rate was higher. But for those MPP cases that have been decided since the program began at the start of 2019, only 1.7% of the cases that have been decided were approved. “That grant rate is so low,” Kocher says. “That really suggests that the entire program itself was designed to make asylum impossible.”

“The purpose of the Migrant Protection Protocols was to undermine the asylum process along the U.S.-Mexico border,” Kocher adds. “One has to ask whether any of the proceedings that took place, any of the hearings that took place, were legitimate…I would say that both the data and also on-the-ground reporting shows that that was not the case.”

In Fajardo’s case, Pinheiro says Fajardo did not have a lawyer—the vast majority of asylum seekers aren’t represented in court, according to TRAC data— and Fajardo alleges that at her last hearing the judge did not give her the opportunity to speak, and an interpreter wasn’t translating everything the judge said. A DHS spokesperson tells TIME in a statement that the agency does not comment on individual cases due to privacy concerns.

After her case was denied, Fajardo spent the next few months attempting to appeal the decision, but COVID-19 shut down immigration courts, delaying the process. On Feb. 22, 2021, the Board of Immigration Appeals dismissed her case according to Pinheiro, just days after the U.S. began processing people with active MPP cases into the U.S.

Fajardo tells TIME she grew desperate and depressed, and decided to attempt to cross the border in Matamoros in late April. When she was caught, she became one of the thousands of people who have gone through the Title 42 process. In Fajardo’s case, she was expelled to Tijuana, rather than returned back to Matamoros, where she and her son lived with her partner in an apartment and she had steady work as a teacher for The Sidewalk School, which provides education to migrant children living in Mexico.

Gabriela Fajardo holds up a white board during an online class she teaches from her home in Matamoros, Mexico, on May 25, 2021.
Sergio Flores—AFP/Getty Images

Coincidently, Rangel-Samponaro and her fellow co-director, Victor Cavazos, were already in Tijuana to begin laying the groundwork for a new school. On April 24, Rangel-Samponaro, Cavazos and Pinheiro, took a trip through the hilly, rugged terrain of rural Tijuana, driving past street vendors and farm animals to arrive at Iglecia Embajadores de Jesus, where Fajardo was waiting so they could send her back to Matamoros. During the reunion, she was clearly still shaken from the experience, but the next day she was on a plane back to Matamoros.

Two months later, as thousands more asylum seekers begin the process of crossing the border into the U.S., Fajardo and her son find themselves again watching and waiting.

“It’s horrible to have to wait, but I am calmer now. I’ve been speaking to a therapist,” Fajardo tells TIME in a phone call from her apartment in Matamoros after she finished her lessons for the day. “Waiting, waiting, waiting, that’s all I can describe what this time has been like, it’s all I can do.”

Their hope at the moment, is that lawyers can make a case for why Fajardo and Josseph should be permitted to enter with Fajardo’s partner, who does have an active MPP case that is pending. What is complicated is that Fajardo and her partner, who declined to be interviewed for this story, are not married, and Josseph has a different biological father. Pinheiro tells TIME that Al Otro Lado is handling 113 cases similar to Fajardo’s, complicated examples of mixed-status families.

For now, Fajardo and others like her will wait. But Kocher, says, it is possible that many under MPP have given up at this point or have slipped through the cracks. According to TRAC, only about 40% of those with open MPP cases were actually able to enter the U.S. as of May 2021. There have been challenges finding those who qualify and getting them to sign up to go through the process, Kocher says, and there’s a chance a similar pattern may occur during phase two of the wind-down. “In many ways MPP has sort of already had its [intended] effect,” he says, “convincing people to leave the border and essentially give up hope that they were gonna have a fair shot.”

Fajardo says she’s not getting her hopes up. “To be completely honest I don’t feel happy,” Fajardo says. “They always fill us with hope and then it never works out. I tell my friends all the time, I’m not going to let myself feel good until I see the first group of people like me get a chance.” 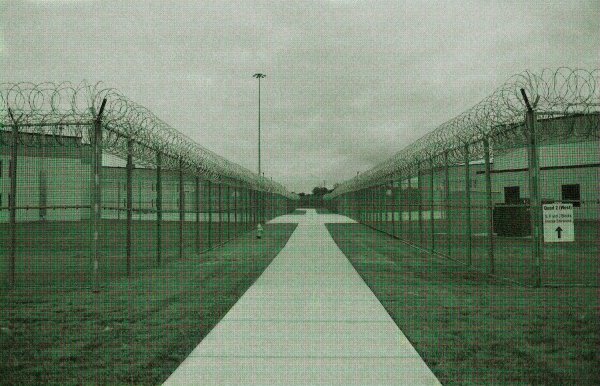 How Prison Gerrymandering Distorts Political Representation
Next Up: Editor's Pick