Accused of Being 'Woke,' Pentagon Pulled Into America's Culture Wars

After weeks of political backlash over Pentagon’s recent attempts to promote inclusion in the military, the nation’s top officer chided lawmakers who accused the armed services of becoming “woke.”

“I personally find it offensive that we are accusing the United States military, our general officers, our commissioned and non-commissioned officers of being ‘woke’ or something else because we’re studying some theories that are out there,” General Mark Milley, the Chairman of the Joint Chiefs of Staff, said Wednesday at the House Armed Services Committee about the Defense budget.

The Pentagon has gradually been pulled deeper into the nation’s culture wars since launching diversity, inclusion, and equity initiatives this year to recruit and retain more women and people of color. The efforts have drawn fire, particularly from Republican lawmakers and conservative pundits, who say the efforts are counterproductive, sowing unnecessary discord and division. Two GOP lawmakers recently launched a web portal for military “whistleblowers” to report examples of “woke ideology” they experience while in uniform. Conservative Fox News host Tucker Carlson, blasted military recommended reading on racism and the concept of white privilege as “poisonous” and “embarrassingly stupid.”

The Pentagon’s recognition of its discrimination shortfalls has come as America faces a reckoning over race and inequality. The military has long considered itself a trailblazer on such issues, most notably when it ended segregation in the ranks in the 1940s, well before the rest of the nation. In recent years, however, the military has acknowledged its lack of promotions for minorities, its need to better support female service members and its requirement to change the names of bases that honor Confederate officers.

Milley, visibly angered, replied to Waltz by stating his belief on the importance of being “open-minded” and “widely read.” “The United States Military Academy is a university,” he said. “And it is important that we train. I want to understand white rage, and I’m white.”

For instance, Milley said he wanted to learn more about the factors that motivated the largely white mob to storm the U.S. Capitol Building on Jan. 6. “It’s important that we understand that because our soldiers, sailors, airmen, marines and guardians, they come from the American people. So it is important that the leaders, now and in the future, understand it,” he said. “I’ve read Mao Zedong. I’ve read Karl Marx. I’ve read Lenin―that doesn’t make me a communist. So what is wrong with understanding, having some situational understanding about the country for which we are here to defend?”

At the direction of Lloyd Austin, the nation’s first Black Defense Secretary, the Pentagon is also in the midst of a top-to-bottom review to weed out extremists from its active-duty ranks. 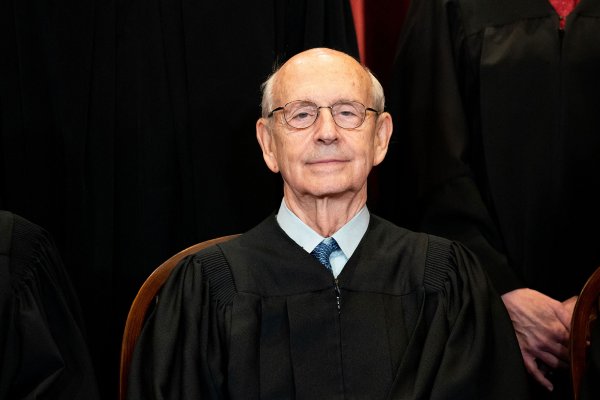 Breyer May Stay on the Supreme Court Just to Spite Politics
Next Up: Editor's Pick