How the Biden Administration Can Make the U.S. a Global Leader on LGBTQ Rights

Andrius Aleksandravicius—EyeEm/Getty Images
Ideas
By Mark Gevisser
Gevisser is the author of The Pink Line: Journeys Across the World's Queer Frontiers

In this, the first Pride Month of the post-Trump era, U.S. embassies the world over have been told that they may once more fly the rainbow flag: a symbolic assertion, forbidden by the past administration, of support for LGBTQI rights. The Trump administration pushed back against these rights domestically—particularly where they involved transgender people—and turned its head away from any human rights agenda abroad. Now President Joe Biden has recommitted himself to this agenda, and a new act is before Congress. As the U.S. prepares to reassume its “role as the global leader in promoting human rights, LGBTQI+ rights must be a top priority” said Jeanne Shaheen (D-NH) on the Senate floor earlier this month.

Sen. Shaheen was introducing the GLOBE (Greater Leadership Overseas for the Benefit of Equality) Acts, legislation that will commit the U.S. to promoting and defending these rights globally. In the same week, around the world, the following happened:

Can American laws or policy do anything about any of this at all? These are the questions being asked by both activists and administration officials now that the U.S. has recommitted itself, officially, to a pro-LGBTQ rights policy. There are no easy answers.

The U.S. certainly has heft, politically and financially. It can use the soft power of diplomacy, and the harder power of carrots and sticks: focused aid funding that supports LGBTQ activists and communities—and, where appropriate, sanctions or the withdrawal of aid. Leaving aside the ethical questions of whether a superpower has such rights of “interference,” there are tactical ones, too. Given that “LGBTQ Rights” is seen, in many parts of the world, as a neo-colonial Western imposition that threatens “traditional values” and “cultural sovereignty,” ill-conceived public action from the U.S. could backfire, as it has in the past.

The Hungarian president Viktor Orban would love nothing more than a broadside against his new law from Washington D.C.: it would prove his very point, which is that Hungary needs to be protected from the meddling perversity of the Western world. And if President Biden publicly insisted that his Ghanaian counterpart, Nana Akufo-Addo, take action to decriminalize homosexual acts, domestic politics would likely compel Akufo-Addo—a firm American ally—to assert his country’s “African” values against U.S. imperialism.

Hungarian or Ghanaian LGBTQI activists could be branded as “foreign agents” corrupted by Western influence, as has happened in countries like Russia and Egypt. They could become even more vulnerable. If, as has happened in other African countries, aid is withdrawn, LGBTQI people could be accused of causing economic hardship for the whole country.

The events that preceded the arrests of the 21 Ghanaians demonstrate just how tricky this territory is. In late January, the organization LGBT+ Rights Ghana opened its new offices and community centre in Accra, the first such physical space ever in Ghana. The opening ceremony was attended by several foreign ambassadors, including the Australian High Commissioner, who made a speech in support of LGBTQ rights. Wisdom K. Bebli, who runs the Alliance for Equality and Diversity, a coalition of LGBTQ organizations in Ghana, told me that the media coverage of the event caused a public outcry and debate as never before in his country. In parliament, the foreign diplomats were lambasted in parliament for interfering in Ghanaian affairs.

In early February, President Biden released a memorandum on “advancing” LGBTQI rights “around the world.” The Ghanaian foreign minister Shirley Ayokor Botchway shot back that while “America is one of our strongest friends,” the Ghanaian laws criminalizing “unlawful carnal knowledge” were “supreme, and that is what we adhere to.”

A few days later, the LGBT+ Rights Ghana offices were raided and shut down. This generated some international protest, including a letter signed by prominent people of Ghanaian descent living abroad, including the actor Idris Elba, the supermodel Naomi Campbell, and the British Vogue editor Edward Enninful.

It was in this heightened atmosphere—stoked by an Evangelical Christian lobby that gains its ideology from rightwing American Christian groups—that a paralegal training was raided by police in May. It seems to have been a planned operation: members of the media accompanied them, and state prosecutors were waiting at the local court for the sixteen women and five men arrested.

Although there are clearly no legal grounds for their prosecution, they were denied bail three times and held for over three weeks. The action is clearly a form of intimidation aimed at discouraging further LGBTQ mobilization and pandering to Ghana’s religious rightwing lobby, Bebli told me.

As elsewhere, Ghanaian activists usually prefer silent diplomacy from foreign missions: such action played a part in finally getting the accused bail. But now the charges need to be dropped, Bebli said, and towards this end a public statement would be very helpful—particularly given that the accused were denied their constitutional rights to free association in a country that trumpets its liberal democracy.

This message has been transmitted to Washington DC. But despite President Biden’s commitment to “swift and meaningful United States responses to human rights abuses of LGBTQI+ persons abroad,” there has been nothing more than a ‘we are monitoring the situation’ statement.

Mark Bromley, who runs the Council for Global Equality—a coalition of American LGBTQ organizations lobbying in the foreign policy arena—believes that this is not nearly enough. Programs supporting the Ghanaian police should be re-evaluated “in a way that makes it clear that Ghana cannot arrest LGBTQI human rights defenders without suffering diplomatic consequences”, and the country’s invitation to a big international Summit for Democracy next year “should definitely be transferred to the ‘questionable’ column.”

Bromley also believes that the U.S. should take stronger action concerning the killings of LGBTQ activists in the “northern triangle” of Central America: Guatemala, Honduras and El Salvador. The week before Andrea Gonzalez’s murder, the Vice President Kamala Harris had visited the country, on her first state visit. Given that Harris clearly cares personally about these issues—witness her participation in DC Pride—“we hope she will personally raise this killing in a way that emphasizes the scale of the problem across the region,” Bromley said.

Beyond words, there is a lesson to be learned from an Obama-era initiative: support for a special unit set up to investigate trans murders and other gender-based violence in Honduras. The results were lackluster: few convictions, many loose ends. “The host government must be a willing partner rather than a passive recipient of aid”, says Bromley, and to this end, “the U.S. must invest the political capital to get the police and the judicial system to accept the need for accountability. Without the political will, or at least the political acquiescence of senior officials, funding and training will not do much.”

Will the GLOBE act facilitate the investment of such capital, should it be passed? The legislation will make it mandatory for the State Department to appoint a Special Envoy for LGBTQI human rights, and to document human rights abuses and discrimination. It will also restrict entry in the U.S. for foreigners responsible for the abuse and murder of LGBTQI people, while making it more equitable for LGBTQI refugees to get asylum in the country.

The bill provides “legal, diplomatic, and financial tools to advance human rights for LGBTQI persons globally,” says Bromley. But he cautions that that these measures will remain just that—tools—unless the U.S. government uses its political and financial muscle. Without these, raising the rainbow flag over embassies could remain little more than an empty symbolic gesture – one that does nothing to offset the allegation of “American imperialism” with significant, substantive positions that might actually make a difference in peoples’ lives.

The challenge lies in using this muscle with more humility than Sen. Shaheen’s well-intentioned comments suggest: in stepping back from the hubris of being “the global leader in promoting human rights.” While such sentiments might lead to the allocation of more resources, or support back home, they are said with a tin ear. They draw unnecessary fire from those who would stake their own positions against American hegemony. The kind of multilateral approach developed during the Obama years, and signaled by President Biden in his memorandum, might be more productive.

The Obama administration tried to negotiate this terrain carefully. The president himself chose his words with characteristic caution and precision when asked, on state visits to Africa, what he thought of his hosts’ anti-gay laws. And at the United Nations, Ambassador Samantha Power was all but invisible on the issue, despite playing a key behind-the-scenes role. Instead, Latin American countries took the lead. In the upcoming years, such balance will need constant maintenance. As more countries decriminalize homosexuality—in Southern Africa and the Caribbean—or legalize same-sex marriage (in Latin America and now East Asia), the U.S. and other progressive states will find new allies.

Meanwhile, in embassies themselves, high-profile Pride events can draw the wrong kind of attention. This happened, for example, in Pakistan in 2011 just two months after Osama bin Laden had been assassinated nearby. An influential cleric lost no time in equating “the so-called war on terrorism” with “cultural terrorism.” Far more effective has been the kind of sanctuary US embassies have quietly provided—from relief funding to actual physical space—to activists under threat from the police or the state. In some countries, diplomats have also very effectively brokered connections on the ground between LGBTQ activists and other organizations, or religious organizations, to help fold this often unpopular cause into broader civil society initiatives.

Some activists would argue that you cannot make an omelette without breaking eggs, and that the U.S. and other Western powers should ignore the “cultural imperialism” accusation and just do what is right. You could also argue, correctly, that local activists do not always talk with one voice: in Russia, one arm of the movement has insisted on the provocation of an annual Pride demonstration, while another prefers to work within the broader human rights community.

But it has always been the job of a foreign service to figure out which voices to listen to, and how: the challenge of a human-rights based approach is to ascertain out what is in the best interests of a local LGBTQI community, rather than the American state. Ultimately, the only way out of the “foreign agent” bind, for LGBTQI activists from countries such as Ghana or Russia or Hungary, is for them to talk for themselves—more than anything, the foreign policy of a country such as the U.S. needs to facilitate, and amplify this. 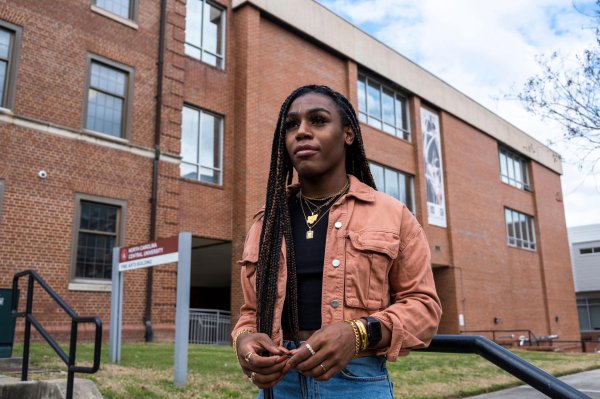 Changing the Game's Andraya Yearwood on Fighting to Compete
Next Up: Editor's Pick