The stress of being unable to conceive a child is a world of anxiety and disappointment unto itself. The time-honored ritual of peeing on the stick, only to be brought down by the sight of that sad, solitary red line; the crushing disappointment of failed IVF treatments: if you’ve been through it, or if you’ve been close to anyone who has, you know it can do a number on your brain. As the young aspiring mother played by Ilana Glazer says in False Positive, the pregnancy horror-drama Glazer co-wrote with director John Lee, “As a woman, this is the one thing I’m supposed to be able to do, and I can’t do it.”

Glazer’s Lucy, an ambitious New York advertising executive, is of course wrong about a woman’s having just one central capability. But in her mind, jangled after yet another negative at-home pregnancy test, her inability to conceive feels like an affront to her selfhood. Her husband, Adrian (Justin Theroux), a typically sure-of-himself surgeon, has been trying to persuade her to see a fertility expert who also happens to be his mentor. Lucy reluctantly agrees. And sure enough, thanks to the scientific miracle of intrauterine insemination—abetted by suave, smiling Dr. Hindle (Pierce Brosnan), the man wielding the all-powerful syringe—Lucy finally becomes pregnant.

There’s a complication, one that Dr. Hindle assures her is easily solved. But the solution involves a serious decision on the couple’s part. Lucy and Adrian see this quandary differently, and Lucy feels pressured, though she ultimately makes the choice that feels right to her. Dr. Hindle abides by her wishes, and Lucy’s pregnancy continues relatively uneventfully—though she senses that behind Dr. Hindle’s slick bonhomie, and all the hearty back-slapping going on between him and Adrian, something is not quite right.

Is Lucy being paranoid? Or is she just suffering, as several of those around her suggest, from the fog-headedness known as “mommy brain”? As Dr. Hindle’s perpetually beaming assistant, Nurse Dawn (Gretchen Mol), suggests, Lucy should be happy with the growing life inside her, with her devoted, successful husband, with the promise of the whole motherhood experience laid before her. So what, exactly, is wrong?

False Positive is framed as a horror movie: Its opening-credits sequence hints at bloody havoc to come, though its chills are mostly the psychological kind. Lucy quickly realizes that she’s losing control over what she refers to as her own “birth story,” a phrase Adrian mocks as being something she picked up on Instagram. The movie is set up so that we’re in tune with Lucy’s creeping paranoia: Adrian has a sneaky home-office safe where he keeps a secret…something. A scene in which he fastens a gold Cartier love bracelet to Lucy’s wrist, with its accompanying mini-screwdriver, cements his smug sense of ownership over his wife, and her womb. Dr. Hindle’s smooth moves have a sinister veneer: Even the way he praises Nurse Dawn for putting the perfect sploodge of lubricant on the speculum feels unctuously paternalistic, the self-satisfied purr of a lion who knows he’s king.

What’s more, Lucy is actively discouraged—by the men around her, of course—from seeking the counsel of a midwife (played by Zainab Jah). The point, in case you’re not getting it, is that although only women can bear children, men have an enormous amount of control over what happens to a woman before, during and after her pregnancy. False Positive even includes a sequence, replete with black-and-white historical photographs, in which a character gives a mini-history of how men have sought to “improve” the childbirth experience for women, without bothering to find out what they want or need.

Has human brainpower really deteriorated to the point where we need every movie’s ideas spelled out for us in signpost letters? False Positive has a lot going for it: Glaser, who brought such marvelous deadpan charm to Broad City, makes a hugely sympathetic mom-to-be, shifting through every believable gradation of joy and outright terror at the thought of what awaits her. Brosnan and Mol are terrific in their supporting roles, bringing the movie some much-needed semi-comical glints of ice. And Lee shows some visual creativity: As Lucy drifts into an anesthesia-induced sleep before a medical procedure, her unspoken anxiety manifests itself as a blood-red butterfly shape spreading across her face like a mask, an evocation of the hazy nightmare twilight that’s descending upon her like a possessive demon. Lee goes for, and sometimes captures, a jittery Rosemary’s Baby vibe; Lucy keeps trying to step out of the shadow of all those who know what’s best for her and her unborn offspring, only to be nearly subsumed by that amorphous, hungry shape.

But False Positive doesn’t sustain its most suspenseful ideas. The big revelation at the end is something of a letdown, and the movie’s final image spells out a metaphor that ought to have been left to suggestion. Historically, horror movies have very often been “about” something beyond their surface scares: a million and one very dull theses have been written about the fear-of-Communism subtext of 1950s creature features. But now it seems that more and more filmmakers are striving to make movies that qualify, for worse rather than better, as that thing we call elevated horror. In search of profundity, they’re boring us more than they’re scaring us—their intent becomes a Wile E. Coyote mallet, when the shivery insinuation of an IV drip would have been so much more effective. Thoughtful moviegoers want, and deserve, filmmakers to trust their intelligence, but False Positive doesn’t extend that good faith. It’s a moderately effective horror movie with a much better, creepier and more nuanced one nestled invisibly alongside, the unborn twin ghost of a movie that might have been. 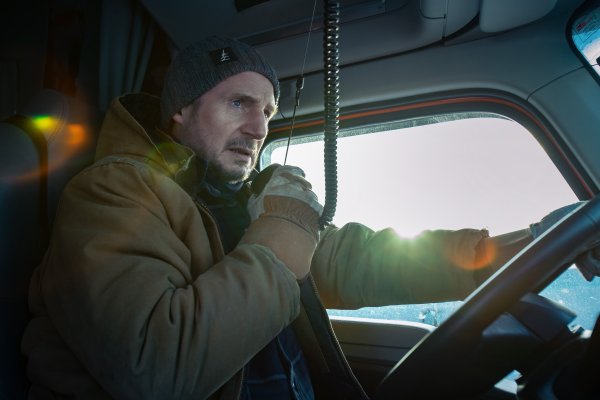 The Ice Road Is an Overly Twisty Action Adventure That Has Its Charms, Chief Among Them Liam Neeson
Next Up: Editor's Pick