When Malone Mukwende, 21, started medical school in London, he identified a fundamental problem: almost all the images and data used in its teaching were based on studies of white patients. But medical symptoms can present very differently on Black and brown skin, leading to misdiagnosis, suffering and even death. Still a student, he has recently launched both a handbook, Mind the Gap, and Hutano, a new online platform intended to empower people with knowledge about their health. I asked him what he hoped to achieve and the wider lessons for all of us.

AJ: For people who don’t know your work, would you explain Mind the Gap?

MM: I got to medical school and noticed there was a gap in our teaching. If we learned about a particular type of rash or disease that manifests on skin, it would always have white skin as the reference. I would ask “what does this look like on other skin tones?” just for my own learning. Often people told me that they didn’t know. I decided that something needed to be done. Some members of staff at the university and I then started collating pictures and descriptions of different conditions on darker skin, and we compiled them all into a handbook that we called Mind the Gap.

AJ: The gap isn’t just because there haven’t been studies on Black and brown skin. It’s because it wasn’t considered important, right?

MM: Yes, that’s right. After the publication of Mind the Gap, someone reached out to me who is a student in Zimbabwe. They said that all the books and reference images they use are also from white skin, even though the population [is] predominantly of darker skin. It really shows you that the legacies of colonialism are still living in 2021. A lot of the textbooks that they get are the ones we in the Western world have discarded, after a new edition has come out. It makes you question and wonder how come in the continent of Africa—I would assume the same thing is happening in much of Asia—there isn’t an established [local] source or resource.There are so many people locally on the ground who know this stuff. But from a wider perspective and a teaching perspective, it’s not being transitioned from individual knowledge into textbooks and resources to help to teach people.

AJ: I have children from different backgrounds, and I know when there was a rash that everybody got, it looked drastically different depending on their skin color. But whenever I looked at medical charts, the reference point was always white skin. Recently my daughter Zahara, whom I adopted from Ethiopia, had surgery, and afterward a nurse told me to call them if her skin “turned pink.”

MM: That’s the kind of thing I started to notice very early on. Almost the entirety of medicine is taught in that way. There’s a language and a culture that exists in the medical profession, because it’s been done for so many years and because we are still doing it so many years later it doesn’t seem like it’s a problem. However, like you’ve just illustrated, that’s a very problematic statement for some groups of the population because it’s just not going to happen in that way and if you’re unaware you probably won’t call the doctor.

AJ: Now that there is so much online, it should be so much easier. So what is your new digital platform, and why is it called Hutano?

MM: Hutano, in my native language, Shona, translates directly to ‘health’. It’s a health social platform, where people from all over the world can connect to form communities and really discuss these different conditions.

AJ: What do you hope it will achieve?

MM: We want people who are living with these conditions to have a platform to be seen and empower their health care literacy. For example, someone who has been struggling with eczema can come onto Hutano and join or even create an awareness group around their condition, and other people from all over the world who have that condition can join in and maybe discuss, “oh I’ve recently been diagnosed with eczema, does anyone know how I can find some clothes which won’t irritate my eczema?” or “I’ve used this cream, does anyone have any experience in how it has worked?” We want to give people the platform to be able to discuss these things. We need to start empowering the individual, and that, I hope, will start to reduce some of the health care disparities that exist.

AJ: Do you have some examples of the consequences of these disparities?

MM: In the U.K. there was a case in the early 2000s, and even though it was a while ago now it shows how serious these things can get. There was a little girl, Victoria Climbié, and she was undergoing abuse from her great aunt and her boyfriend. She presented to the hospital, and she had visible injuries on her skin. A doctor concluded that she was suffering from scabies and accepted her guardians’ story that she had inflicted the wounds herself by scratching the scars. Eventually they realized that this was a potential social-services case and a case of neglect. Unfortunately she did end up dying due to abuse at the hands of her guardians. From a health care perspective there had been an opportunity to be able to intervene and fully alert social services quicker. In the report on her death it said she had 128 different injuries. We missed that many different signs on darker skin to be able to identify that this was actually a problem. This is a common problem with bruising and injury in domestic violence and abuse cases.

AJ: And this goes beyond just looking at skin, doesn’t it? There are wider problems with our medical knowledge and our evidence and our measurements?

MM: It’s the politics of medicine, for so long. For instance if you read an old medical textbook it will tell you from a European perspective that a 70 kg (154 lb.) 25-year-old male is the reference point, and if you are above that you are obese, if you are below that you are malnourished, and who came up with this scale? We like to say medicine is evidence-based, but we need to question where our evidence is coming from. A lot of the studies only included people from Europe and America. We’ve got all these data sets but actually we only tested 30% or 40% of the world.

AJ: So how do we recalculate?

MM: I can’t say I have a solution because if we decide to group by age that will also open a can of worms; [the same is true] if we group by race, if we group by income. It just depends on individual circumstances a lot of the time. If [individual] people are empowered they will have an adequate amount of information or an adequate ability to ask the right questions about their health care.

AJ: What amazes me is that you’ve managed to publish this handbook and created this new platform while you’re still a medical student.

MM: I’m a big believer that age shouldn’t be a barrier. If there is a problem that needs to be fixed it doesn’t matter if you’re a doctor who has been qualified for 25 years or if you’re somebody who has just walked into the doors of medical school, as long as you are committed to the cause.

—With reporting by Madeline Roache 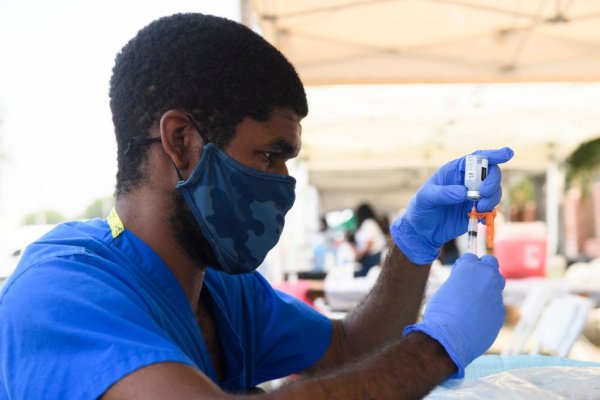 Vaccinations Rose in June. Will the Momentum Last?
Next Up: Editor's Pick