F9: The Fast Saga May Be the Most Blockheaded Installment in the Franchise—And That's Just Fine

Just as the dessert topping you scoop out of a tub may contain only trace amounts of actual cream, the ninth installment in the Fast & Furious franchise, F9: The Fast Saga, isn’t so much a movie as an entertainment product. There’s nothing wrong with that, as long you know what you’re getting, and there are even some pluses. If you can’t remember a thing about any of the previous Fast & Furious movies—or if you’ve never seen them—you won’t feel any more or less lost than if you’d committed every rapid-fire frame to memory. And while none of these films require much heavy lifting in the brain-muscle department, F9 may be the most impressionistically blockheaded yet. You could map its dimensions on a handful of flashcards: Cars go vroom. Vin Diesel loves family. Gravity means nothing.

The plot goes something like this: Dominic Toretto (Diesel) and his childhood-sweetheart wife, former amnesiac Letty (Michelle Rodriguez), are drawn out of their hiding spot in the country for a job they can’t refuse. That job requires driving, fast. Other people who will also end up driving fast include Roman (Tyrese Gibson), Tej (Ludacris) and Ramsey (Nathalie Emmanuel). Meanwhile, the villainous Cipher (Charlize Theron) glowers from inside a plexiglass box. Also, Dominic has a long-lost brother, Jakob (John Cena), who has gone over to the dark side. Like his brother, Jakob is a very good driver and thus will also find many opportunities to drive, fast.

John Cena has gone to the dark side in F9
Photo Credit: Giles Keyte/Univer—© 2021 UNIVERSAL STUDIOS. All Rights Reserved.

In between all that driving and the crackups and explosions that come with it, characters express their deepest feelings, generally in sentences of three words or less. Diesel occasionally utters some cornpone bromide about the importance of family: when he does so, his mouth gets all tiny, evidence of the conviction behind his words.

F9 is much better when no one is talking. Director Justin Lin has steered four Fast & Furious movies to the finish line (including one of the most entertaining, the 2006 Tokyo Drift). Here, he orchestrates all manner of don’t-try-this-at-home action sequences, including one in which a vehicle speeds smoothly off a cliff and straight into—well, let’s not spoil it. Strung together, these scenes constitute something more like a very long trailer than an actual movie. But if that’s enough to put a tiger in your tank, then go for it. 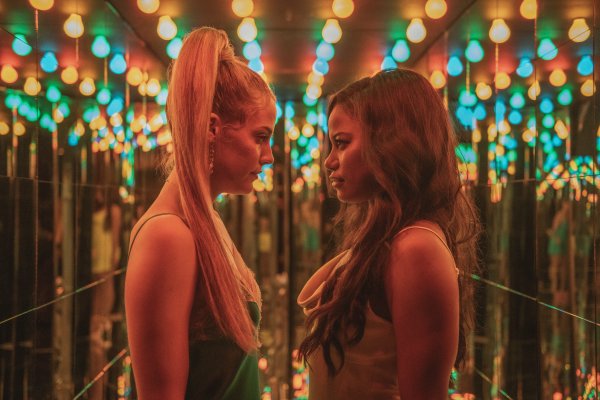 Zola Is a Wild Road Trip Movie That Works Against All Odds
Next Up: Editor's Pick