This year, like every year for the past 20, Szymon Niemiec will wear a rainbow-colored stole at the Equality Parade in the Polish capital of Warsaw on June 19. “I won’t have a banner because I will be leading the entire parade. I can’t keep my hands full,” says Niemiec. The 43-year-old has seemingly contradictory roles — one as a prominent LGBTQ rights activist and the other as a priest, in a country where church and government are united in condemnation of and hostility towards the LGBTQ community.

Niemiec organized Poland’s first Equality Parade in Warsaw in 2001, which drew a crowd of 300 people. Each year, the crowds have grown bigger (with the exception of the 2020 parade, which was hosted virtually due to the COVID-19 pandemic). By 2003, thousands joined and in 2019, 50,000 people marched in the largest Pride event in central and eastern Europe. Now, in at least 20 cities across Poland, the parades are taking place throughout June albeit with limited numbers owing to the pandemic.

But this year’s events are taking place at a time when homophobia is on the rise in Poland, fueled by hateful comments from the government and Roman Catholic Church (RCC) leaders. According to a 2020 survey by ILGA-Europe, a Brussels-based advocacy group, Poland ranks as the most homophobic country of the E.U.’s 27 member- states. In the past two years, 94 local authorities have adopted non-binding resolutions opposing what they call the “LGBT ideology”, labelled “humanity free” zones by E.U. president Ursula von der Leyen. “It has a chilling effect on people living there, who are now even more scared to come out. Those who bully LGBTQ people are emboldened by homophobic politicians,” says Bart Staszewski, a Polish director and LGBTQ rights activist.

The nationalist Law and Justice party (PiS) has rallied its conservative support base first by targeting migrants and then the LGBTQ community since taking office in 2015. Last summer, Polish President Andrej Duda declared that “LGBT are not people; they are an ideology.”

PiS echoes the views of Poland’s Catholic church, which often takes a stronger stance than the Vatican on social issues. After Pope Francis said same-sex couples should be supported by civil union laws, a spokesperson from the Polish Bishops Conference declared that the Pope’s words were not part of the Church doctrine. “The board that presides over the Polish Bishops’ Conference is dominated by the most conservative bishops. The negative attitude towards the more liberal currents in the Church is tangible,” says Marta Kotwas, a doctoral researcher specializing in Polish politics and society at University College London. Many Polish catholics oppose Francis’s attempt to move away from the Vatican’s firm adherence to traditional doctrine and deeply conservative stance on sexual morality under Pope John Paul II, the Polish former archbishop of Krakow. The late pontiff is seen as a national hero in his homeland for supporting the pro-democracy movement that overthrew the communist government in 1989.

In deeply devout Poland, where 87% of the population identify as Roman Catholic, activists are trying to create a space for people to be openly LGBTQ and also Christian. They are part of a growing international movement of churches and religious organizations that advocate LGBTQ rights. In recent years, clergy have begun blessing same-sex marriages in New Zealand’s Anglican Church, Germany’s Catholic Churches and U.S.’s Presbyterian Churches. In Poland, it’s almost impossible for openly LGBTQ people to remain an active part of the Roman Catholic Church, which, according to activists, excommunicates people who are openly LGBTQ. Marek Jedraszewski, the current archbishop of Krakow, referred to LGBTQ people as “the rainbow plague” in 2019. “Just holding a rainbow umbrella or bag could get you kicked out from the church,” says Niemiec.

At the same time activists say the LGBTQ community can be very critical of openly religious members. “It is generally anti-clerical, and often anti-religious”, because of the “damage” that the RCC has done to them, says Uschi Pawlik, a co-leader of a local group at the Faith and Rainbow Foundation, which aims to promote acceptance LGBTQ people in Poland’s Christian churches. Niemiec and the foundation’s 20 active members are practically the only people in Poland trying to promote full acceptance of the Christian LGBTQ community. “It’s an enormous job with very few human resources,” says Pawlik.

How an activist became a man of the cloth

In 1998, when Niemiec became an activist, the country’s LGBTQ rights movement was only just beginning to emerge. At that time, the 21-year-old was working as a journalist for a weekly newspaper covering news of Warsaw. His editor in chief sent him to report on what Niemiec calls one of the first gay demonstrations in the city. “Two men and a lot of journalists attended,” he says. For reasons he says he can’t explain, he decided to join the demonstrators. “It triggered something in me,” he says. Like the two men, he covered his face with a scarf and put on sunglasses. The spontaneous decision was both his coming out as gay and first act of LGBTQ activism.

Niemiec says the next day he was fired from his job. “My boss told me that I crossed a line by joining the demonstration,” he says. In 1998, five years before the passing of anti-discrimination legislation in Poland’s labor code, he says it was possible for someone to lose their job for being openly LGBTQ or being seen to support this community’s rights.

Later, he began training as a psychologist while working as a cultural ambassador of Poland to the International Lesbian and Gay Culture Network, a post he held from 2000 to 2006. The Network aims to bring together groups and individuals around the world to end homophobia through culture. One of his main goals, in addition to launching Poland’s first Equality Parade, was to find churches that welcomed the LGBTQ community. He wrote to every church and religious association in the country, he says, but did not receive a single response. “We were rejected,” he says.

Recognizing that Poland’s LGBTQ Christian community lacked leaders and spokespeople is what prompted Niemiec to become an independent Catholic priest. In 2006, bishop Paul David C. Strong from the Christian United Church and an independent Catholic Church, ordained him deacon, a low ranking member of the Christian ministry. Independent Catholic denominations are made up of clergy and non-clergy that self-identify as Catholic but are not affiliated with historic Catholic churches, such as the RCC. Followers often choose independent Catholicism as an alternative way to express their beliefs because they reject some traditional Catholic teachings. As a deacon, Niemiec began holding public masses in rented rooms and a house chapel. “It was a church for everyone,” he says. In 2010, Strong ordained him priest and in 2012, bishop.

Inclusive churches are crucial for LGBTQ people who have been expelled from their church and want to remain active Christians. For people living outside big cities, being kicked out of a church means being ostracized from an entire community. “It is extremely painful. There is a huge difference between a big city like Warsaw and Krakow, where you can hide, but what about small villages or small cities where everyone knows each other? Some priests have outed the name of a gay person from the pulpit and described them as a danger to the community,” says Niemiec.

The Faith and Rainbow Foundation has been trying to hold parishes and priests to account over public homophobic statements. Members of the foundation, set up ten years ago and formalized in 2018, regularly write letters and individual emails to churches and the clergymen about the effects such rhetoric can have. “Their messages are broadcast in catholic media, it trickles down onto ordinary people and it results in individual tragedies,” says Pawlik. Roman Catholic officials have never replied to their letters, nor have they responded to their dozens of requests to meet with the foundation, she says.

The most important aspect of the group’s work, says Pawlik, is local meetings for LGBTQ Christians, many of whom “are in difficult situations and deeply in the closet.” Twice a month, the foundation organizes local meetings in six cities across the country, where some 150 members discuss passages from the bible and LGBTQ issues. “I can see that for many people, this is the only context where they can really be themselves,” she says. Kazimierz Strzelec, a member of the foundation’s Advisory Committee and mechanic from a town near Lublin in the country’s east, says the foundation “changed his life.” It taught him “what the bible really writes about LGBT people and how to interpret it,” he says, “I am now an openly gay Catholic and I stand with my head high.”

With just 20 active members, the foundation is restricted in how much it can do. But if there is a possibility to expand, Pawlik says she would like to team up with professional psychologists to run a mental health support program. The activist says there is also a need in Poland for clergy-run pastoral care specifically for LGBTQ Catholics as an alternative to the pastoral initiatives sponsored by the Roman Catholic Church, which, according to her, places an emphasis on “curing” people from homosexuality. Last August, Poland’s Catholic episcopate came under fire from activists after releasing a “position on LGBT+”, which called for the creation of therapy centers for “people wishing to regain their sexual health and natural sexual orientation.” Bishops later clarified that they would not force LGBTQ people to undergo therapy.

Niemiec was forced to stop holding public masses after a public prosecutor in October 2019 accused him and two of his colleagues of “offending religious feelings” in connection to his services. The offence is punishable by up to two years in jail. The police have not banned Niemiec’s services, but he says the negative media coverage surrounding the case has put him and people attending his services at greater risk of anti-LGBTQ aggression or violence.

The priest has long been aware of the dangers that come with being an prominent LGBTQ activist in Poland. Over the past two decades, he says he has been depicted as an “enemy” in the state media and been the target of physical attacks on three occasions, which he believes were motivated by anti-LGBTQ hate. There is no official data on hate crimes based on sexual orientation or gender identity, as they are not recognized in Polish law. But activists say that violence against LGBTQ people in Poland has increased in the last year, and included cases of physical violence.

Although Niemiec no longer holds public masses, he still conducts private weddings, funerals and other services. “If anyone needs me to make sacraments, I will be there,” he says, “there are people like me all over the world”. A sense of international solidarity seems to be important for Niemiec, who speaks about his friends in the U.S. and Europe, and the Faith and Rainbow Foundation, whose social media account posts daily updates about positive developments in LGBTQ rights movements around the world.

After a year of restricted religious services and virtual meetings due to the pandemic, this year’s Equality Parade is an especially significant celebration for activists of faith. “We will be visible with our banners and our flags, showing the public that LGBT Christian people do exist,” says Pawlik. “We’re making a space for ourselves.” 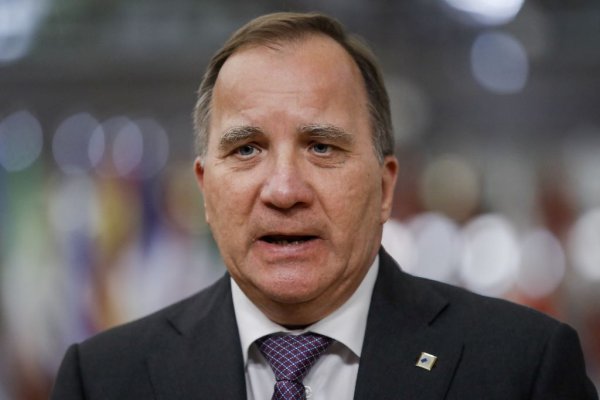 Swedish Prime Minister Faces No-Confidence Vote as Parties Unite Against Him
Next Up: Editor's Pick