French filmmaker François Ozon is so prolific that his movies aren’t always easy to categorize. A woman-centric murder-mystery musical here, a post–World War I romance set in Germany there: Who knows what he’ll try next? But he does have a taste for dramatic, doomed romance, stories brushed with an aura of Baudelairean decay, like roses that are singed and ragged at the edges. That’s the vibe of Summer of 85. Even though it’s set in the sunniest of locales, the coastal area around Normandy, it gives off a heady, late-August perfume.

When his borrowed boat capsizes, teenage Alexis (Félix Lefebvre) is dumped in the drink, splashing around and in need of a rescue. Dashing swain David (Benjamin Voisin) just happens to be sailing nearby and swings over to help. His grin is easy, his manner unflappable: He gives the panicky Alexis instructions in how to right his boat and tows him ashore, later bringing his new friend home to meet his mother (Valeria Bruni Tedeschi).

Alexis comes from a working-class family—he’s a good student, but he might need to sacrifice his studies to help his parents financially. David, whose father is dead, helps his mother run the family’s seaside boating-goods shop. The class differences between these two should divide them, but they fall deeply in love, and it’s idyllic, at first. David, sophisticated and breezy and a little older, draws Alexis from his shell. The two zip around on David’s motorbike, with Alexis, as passenger, clinging tight. They go to the movies, to the beach. Alexis claims, in voiceover, that the first time they sleep together is the most beautiful night of his life. He and David make a vow that will unite them beyond death.

But very early in this adaptation of Aidan Chambers’ 1982 queer young-adult novel Dance on My Grave, Ozon telegraphs trouble for these two. David, as Alexis tells us, is a “future corpse,” and the town suspects Alexis may be responsible for his death. Summer of 85 flirts with murder-mystery elements, but mostly, it’s a moody and meditative reflection on the nature of first love. Ozon loves melodrama, and what could be more melodramatic than that first swan dive into devotion—a leap that sometimes twists into jealousy and obsession? Summer of 85 delights in romantic excess, ending up as an almost literal evocation of one of the songs on its era-specific soundtrack. Summer can be cruel, as Bananarama once sang, and Alexis’s summer of love ends up a season of grief and near-madness—but he wouldn’t have missed a second of that blazing sun for the world. 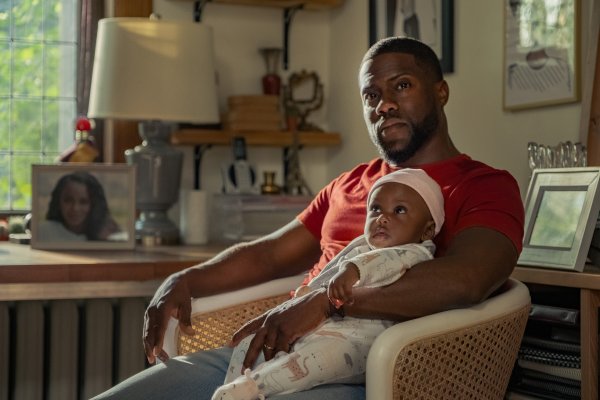 The True Story Behind the New Netflix Film Fatherhood
Next Up: Editor's Pick