'Someone's Going to Be Left Holding the Bag.' How Finance TikTok Is Navigating 'Meme Stock' Hype Among Young Investors

A growing cadre of Gen Z investors are anticipating a summer of meme stock mania, ready to capitalize on the next big short squeeze after a fateful two weeks in January when GameStop’s stock price skyrocketed over 1500%.

But while meme stocks may have introduced a new, young audience to the wonders of investing, popular finance TikTok creators say the viral trading craze is fueling unrealistic expectations.

According to a recent report from financial services giant Fidelity, more than half of Gen Z-aged people surveyed made a trade in the first three months of 2021, a period of time when attacks on short sellers had begun fueling heightened market volatility. Fidelity’s findings support the notion that these attacks were driven by hyper-online investors and indicate that rather than relying on traditional market monitoring methods, around 41% of 18-24-year-old investors turn to social media platforms like Reddit, Instagram and TikTok for investment advice.

On TikTok alone, there’s a huge appetite for so-called StockTok videos, with the corresponding #stocktok hashtag garnering a total of over 1.3 billion views. The more general #investing hashtag has amassed an even more impressive 2.8 billion views on the popular video sharing app.

“A lot of people who are new to investing think this type of price action is normal. But really, it’s not,” Ross says, referring to the dramatic price increases that stocks like GameStop, AMC, and BlackBerry have seen after going viral on social media forums like Reddit’s WallStreetBets. “Meme stocks aren’t really something that you can analyze and make an educated guess on what the share price should be because they’re based on hype and how many people are trying to pump the stock at any particular time.”

Since meme stocks arrived on the scene, Call to Leap founder and TikToker Steve Chen (@calltoleap), a former public school teacher who became “financially free” after learning how to invest in the stock market, says there’s been a noticeable shift in finance TikTok conversation.

“When all these meme stocks started coming out, a lot of the comments on my videos began gravitating towards hype,” he says. “You’d see people’s comments shift from understanding the fundamentals of companies to like, ‘My friend Joe is investing in AMC,’ or, ‘I saw this guy on Reddit who’s about to buy 1000 shares in GameStop.’ The conversation moved from sound investing to just kind of YOLO-ing money.”

For Chen, that kind of talk is indicative of the misguided notion that meme stocks are a surefire get-rich-quick scheme.

“These hype stocks can be very dangerous for new investors if they get into the stock market with the mindset of, ‘I’m going to buy these meme stocks and make a quick buck,’ rather than seeing the market as a vehicle to grow their wealth slowly over time,” he says. “I think it’s great that all these investors are able to band together to try to move the market, but at the same time, people can lose a lot of money.”

While there are people who have made a lot of money in a short amount of time on meme stocks, Ross says that investing in them can be a risky business. “I tell people to stay away from meme stocks for the most part,” he says. “For me, it’s kind of like a game of hot potato. Someone’s going to be left holding the bag.”

As newbie investors seek to educate themselves on the stock market in the wake of meme stock mania, Errol Coleman (errol_coleman), a 22-year-old creator with over 265,000 followers who’s been trading for over four years, says it’s important to take any financial advice on social media with a grain of salt.

“There are a ton of creators who popped up after the GameStop and AMC situation who, in my opinion, just spew misinformation that shouldn’t be out there,” he says. “It’s cool to get ideas from social media, but I think it’s super important to then go and do your due diligence. One thing I say on my account is don’t take my word for anything. I’ll bring attention to certain things, but I remind people that they need to put in the time to actually understand what they’re doing.”

TikTok itself offers the following warning on relevant finance hashtag pages: “Before following any financial advice, keep in mind that all investments involve risks and consider doing your own research.”

“People are giving away this information for free, because that’s probably what it’s worth,” Ross says. “For the most part, creators on finance TikTok are kind of winging it to try and build an audience. So people need to be really, really skeptical of who they follow and always do their own research when getting advice from anybody on social media”

People using social media platforms like TikTok to try to manipulate others for their own profit also isn’t a new phenomenon, Ross says. “Even before the GameStop stuff, you would have people posting videos about penny stocks where they would make all these outlandish claims, like Bill Gates is investing in this company or it’s about to get acquired by Amazon. That spreads really fast on TikTok because everyone wants to buy a stock that Bill Gates is investing in. But really, it’s not true at all and the person who made the video probably bought a bunch of it beforehand. Then they sell when the price jumps and everyone else gets left holding basically a worthless penny stock.”

In the same vein, creator Zaid Admani (@admani_explains), a civil engineer who’s been investing in the stock market since he was a teenager, says it’s important to remember that meme-centric StockToks don’t have to be accurate to go viral. “Because of how TikTok works, you don’t have to have a lot of followers for your video to take off. And there are a lot of people on the platform now who are just there to pump whatever meme stock they might be invested in.”

Ultimately, whether younger investors decide to invest in meme stocks or not, Admani says he hopes the mania surrounding them serves as their motivation to learn more about investing as a whole. 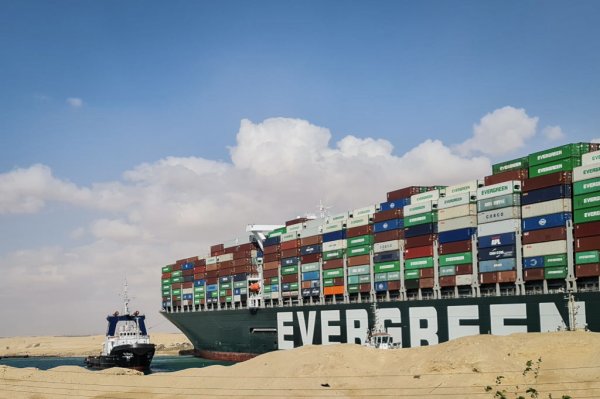 Suez Canal, Ever Given Ship Owners Reach Compensation Deal
Next Up: Editor's Pick