The Future of the Internet Is Under Greater Threat Than Ever Before—and Activists Say the U.S. Needs to Step In

The future of the Internet is under greater threat than ever before from authoritarian governments, according to literary and human rights group PEN America, which called on the world’s democracies to unite to defend freedom of expression online.

Repressive governments are imposing new regulations that invoke “digital sovereignty,” but in reality can be used for censorship, surveillance and crackdowns on dissent, PEN America warns in a new report published Tuesday. Also on Tuesday, the U.N.’s human rights chief Michelle Bachelet pointed to “authorities in various countries” who have shut down the Internet and demanded takedowns of social media posts. “I remind these and other States that criticism – online or offline – is not a crime,” she said in a statement. “It is a necessary element of any vibrant society.”

In its earliest days, cyberspace was like the Wild West, with no way for governments to enforce national laws, and very few even trying. But as the Internet’s impact on society has grown, so have efforts to regulate the negative effects it can have on individuals and societies. Many democratic governments around the world are grappling with laws to mitigate privacy risks, disinformation and hate speech, often making the argument that national laws must also apply online, known as digital sovereignty. But authoritarians, PEN America warns, are using similar rhetoric to consolidate their own power.

States crack down on digital freedoms

“The most consistent, earliest, and most enthusiastic champions of digital sovereignty have been authoritarian states,” James Tager, the lead author of the report, tells TIME. “When they say digital sovereignty, they have a very specific idea of what they mean. And it’s not consistent with international human rights standards.”

The practice extends beyond traditional authoritarian states like Russia or China, whose “great firewall” is a longstanding example of how governments can attempt to control what their citizens see online. Smaller countries like Belarus and Myanmar are increasingly adopting similar approaches. And democratic states like India and Nigeria are using the argument for digital sovereignty to mask repressive crackdowns on freedom of expression, PEN America says.

On June 4, the Nigerian government banned Twitter nationwide after the platform removed a post from President Muhammadu Buhari for what it said was a violation of its rules. And in April, the Indian government forced Twitter and Facebook to remove dozens of posts critical of its handling of the COVID-19 pandemic, citing national law.

Analysts and advocates have stepped up their concerns that moves toward digital sovereignty could lead to internet fragmentation, the report says, adding that: “The ability of writers, journalists, and others to communicate across national boundaries will be subject to political diktats, online communities will fracture, and a new toolbox for state repression will open.”

So far, it has been left to the technology companies to push back, with limited success. Twitter has posted records of the takedowns ordered by the Indian government to a public database. After an earlier incident in February, it said that it had refused to take action on some of the tweets belonging to politicians, journalists and activists “because we do not believe that the actions we have been directed to take are consistent with Indian law.” In May, Indian police visited the Twitter office in New Delhi after the social media platform labeled several tweets by ruling party members as “manipulated media.”

Calls for a new approach

Democratic governments must do more to stand up for online free expression, the PEN America report argues. “We’re calling for a renewed and more muscular commitment to democratic digital multilateralism,” Tager says. “A coalition of democracies should be developing new digital standards for the future of the Internet.”

The Trump Administration’s unilateral approach to international diplomacy coincided with digital regulation coming to the forefront of the global policy debate. “We lost a lot of critical time during the Trump years,” says Jason Pielemeier, a former U.S. diplomat who worked on Internet freedom issues at the State Department, who now works for the Global Network Initiative, an NGO that aims to encourage democracies to set global standards for safeguarding digital rights. “The crux is that democracies are not winning the battle of ideas when it comes to how to address the critical risks of our increasingly connected world.”

The Biden Administration says it is restoring the promotion of human rights and democracy to the center of U.S. foreign policy, and earlier this month called on Nigeria to reverse its Twitter ban. Former President Trump conveyed the opposite sentiment in a statement on June 8. “More countries should ban Twitter and Facebook … perhaps I should have done it while I was president.”

READ MORE: India’s New Internet Rules Are a Step Toward ‘Digital Authoritarianism,’ Activists Say. Here’s What They Will Mean

The Biden State Department also says that it promotes Internet freedom through both bilateral and multilateral channels. At the G7 meeting in the U.K. last week, members and allies signed a joint statement affirming “freedom of expression, both online and offline, as a freedom that safeguards democracy and helps people live free from fear and oppression.” India was one of the signatories to the “open societies” statement, but only after seeking some tweaks to the language.

But to some observers, these steps don’t go far enough. “The Biden Administration really needs to step up and articulate a broader vision [of Internet freedom] to guide Congress, and also to demonstrate to other partners around the world what they think the right way to handle these risks in a rights-respecting manner is,” Pielemeier says. 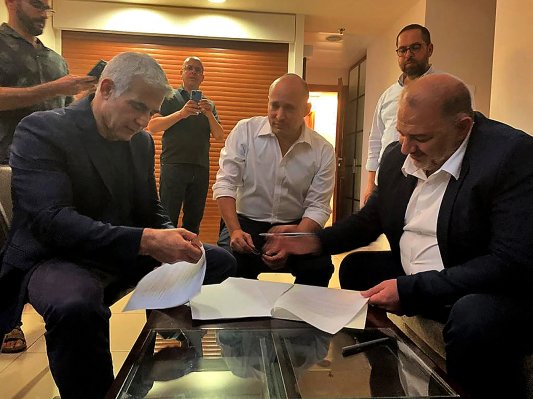 The Arab Kingmaker on Why He Joined Israel’s New Coalition
Next Up: Editor's Pick