Expelled From the U.S., Kidnapped in Mexico and Separated From Her 8-Year-Old Daughter. A Mother's Journey at the Border

Estefani and her eight-year-old daughter, Ashly, embrace in a park near the home of relatives in June.
Ilana Panich-Linsman for TIME
By Jasmine Aguilera

Estefani doesn’t know how long she was kept from her daughter. She says that after being kidnapped on the streets of Reynosa, Tamaulipas, in late February, the days started to blur together. Estefani’s 8-year-old daughter Ashly was able to run away while men snatched Estefani off the streets—that much Estefani knew—but while the 27-year-old from El Salvador was held, she didn’t know that Ashly had crossed the border into the U.S., where the government classified her as an unaccompanied minor along with thousands of other children and teens who have been processed into the U.S. since the start of the Biden Administration.

The kidnappers were likely members of organized crime groups, though Estefani says she couldn’t know for sure who they were. She and her lawyer, Kate Lincoln-Goldfinch, say Estefani wouldn’t have been vulnerable to kidnapping in the first place, nor would her daughter have become an unaccompanied minor in the U.S., if not for the U.S.’s Title 42 rule, a Trump-era measure that allows border officials to immediately “expel” anyone who tries to enter the U.S. without authorization or to make a claim for asylum because of the risks posed by COVID-19.

About four months later, on June 10, Estefani and Ashly were finally reunited at the Dallas-Fort Worth Airport, after Estefani says she was able to escape her kidnappers along with a group of other women. She made contact with her brother in Texas, who she says was relieved to know she was still alive. TIME spoke to Estefani on the condition that her last name be withheld for fear she can be identified by her kidnappers. TIME is also only identifying Ashly by her first name because she is a minor.

Their reunification in the U.S. is a rare one, and was only made possible because the U.S. government granted Estefani a humanitarian exception to Title 42 to allow her to enter the U.S. and reconnect with her daughter and brother, who planned to assume custody of Ashly while Estefani remained missing. While the U.S. government does not keep data on how many unaccompanied minors arrived at the border with a parent or family member, some news media reports have documented cases of parents choosing to send their children into the U.S. alone, knowing family units may be expelled. Reuniting families after a child is classified as unaccompanied in the U.S. while the parent or family member stays in Mexico because of Title 42 can be a challenge, and typically can only happen when the parent has access to an American lawyer.

“It was a miracle,” Estefani says. “What God has done for me, I’ll never be able to repay the kindness.”

While some aspects of Estefani’s journey have been rare—escaping her kidnappers, reuniting with her daughter and gaining a humanitarian exception to enter the U.S.—her experience leading up to her escape was not. Being expelled from the U.S., kidnapped in Mexico, while family in the U.S. wait in worry, are situations incredibly common for families who have tried to cross U.S.-Mexico border this year. While more family units are being allowed the enter the U.S., under Title 42 the U.S. government has conducted over 463,000 expulsions at the southern border with Mexico between January and May of this year. Those expelled to Mexico are often subject to violence and kidnappings.

“For me, what’s different about the Ashly case is that they didn’t know if the mother was alive for several weeks,” Lincoln-Goldfinch tells TIME. “The cartels have really seized upon the vulnerability of the migrants.”

Estefani wears a ring, which she found in a river in El Salvador, that includes the word "Love."
Ilana Panich-Linsman for TIME

After taking several buses from El Salvador to the U.S.-Mexico border, Estefani attempted to cross into the U.S. with her daughter in February, hoping to make a claim for asylum and eventually unite with her brother in Dallas. When they arrived, Estefani and Ashly were held and expelled to Reynosa in late February. Although the number of family units expelled at the border has started to decline, according to U.S. Customs and Border Protection data, as more families have been permitted to enter the U.S., Estefani and Ashly were among the hundreds of thousands of families who were expelled.

“I never imagined that they would return me [to Mexico],” Estefani says. “It was really hard for me. It was a really hard hit to go from the U.S. back to Mexico.”

This part of the story is fuzzy in Estefani’s memory. All Estefani remembers is being expelled after dark to Reynosa, and she says she found a place in a local shelter for her and Ashly to stay. At the shelter, Estefani says she encountered Mexican immigration officials, and worried that she was going to be deported from Mexico if she stayed at the shelter any longer. She decided to leave, and for many days the two stayed in the city’s center plaza, where hundreds of other migrants have started to live in a tent encampment and a small gazebo to try to protect themselves from the elements.

Read more: Shelters From Reynosa to Tijuana Are at Capacity and Scrambling for Resources as the U.S. Continues to Expel Migrants

Kidnappings and violence against migrants like her is “common,” according to Andrew Selee, president of the Migration Policy Institute (MPI), a nonpartisan research institution. Many organized crime groups that stretch along the U.S.-Mexico border see migrants as a revenue stream, according to MPI, through kidnapping for ransom or trafficking. “In Reynosa in particular, what you have is the confluence of the most predatory organized crime groups with the largest vulnerable populations—the largest number of vulnerable [migrant] families,” Selee adds.

According to Human Rights First, a nonprofit immigrant advocacy and research organization, 3,250 acts of violence against migrants, including kidnapping, have been reported in Mexican border cities since the start of the Biden Administration.

Estefani says she was kidnapped by several men who kept her in an “ugly” room with several other kidnapped women. Hours blurred into days, and Estefani says she doesn’t know where she was being kept, if it was an apartment or a house, or how many others were in the building with her. All she thought about was her daughter. “I felt fear for my life,” she says. “When you’re in the hands of people like that, well it’s hard to survive it. It was hard, and to know that I knew nothing about my daughter, where she was, for me it was really hard.”

It was dark when Estefani and the other women were able to escape their kidnappers, Estefani says. Though Estefani says she couldn’t distinguish one day from another while held captive, she could have potentially been held for weeks. The women scattered when they escaped, and Estefani was able to borrow a cell phone to call her brother in Dallas on May 28.

Eight-year-old Ashly was in government custody for about five weeks, at facilities run by the U.S. Office of Refugee Resettlement in California. Just how Ashly was able to cross the border is unclear—Estefani says it may take time for Ashly to be able to recount the entire story, even to her. So far, Ashly has described walking alone for a “very long time,” but she was able to find food, according to Estefani. Ashly tells Estefani that she was able to join a group of other people who were attempting to cross the border, and that is how she came across.

“It was her dream to come [to the U.S.], that’s what she wanted, to come here and study for a better future,” Estefani says, adding that is how Ashly knew to continue journeying north without her mother.

On May 18, Ashly’s case was referred to Lincoln-Goldfinch, an immigration attorney who is also the president of the board of directors at VECINA, a nonprofit that mentors lawyers in immigration law. By that point, Lincoln-Goldfinch says, Ashly had already been in custody for about two or three weeks, where she contracted chickenpox and had to be quarantined.

“This case really stood out to the people who referred it to [VECINA], who of course are in these detention centers and see these kids all the time,” Lincoln-Goldfinch tells TIME. “The combination of the young age of Ashly, plus the quarantine, plus not knowing where her mom was and just being so alone was really hard.”

“I remember the day I got the email about her, I was about to start my day at work and I just couldn’t focus on anything else,” Lincoln-Goldfinch adds. “I have a daughter the same age as Ashly.”

Lincoln-Goldfinch spent the next few days trying to get Ashly released to her uncle in Dallas, knowing Ashly’s mother was missing and likely still in Mexico. That is until May 28, when Estefani was able to connect with her brother and with Lincoln-Goldfinch shortly after.

“She just told me, mamita, I love you so much,” Estefani says. “She said it was hard to be away from me, that she missed me and wanted to be with me.”

On June 9, Estefani finally received the news she’d been waiting for. Ashly was cleared for travel, and was flown to Dallas to reunite with her mother on June 10. It was an emotional reunion, and both Estefani and Ashly brought presents to exchange. Estefani gifted Ashly a doll. Ashly gave Estefani a card with hearts on it, which she made herself because she loves to draw.

“I barely slept from excitement,” Estefani says. “[When I saw her] I was so happy, but also sad. I cried with pain because it was so hard to be away from her.” Estefani noticed that Ashly grew a lot, and was now nearly the same height as she was. 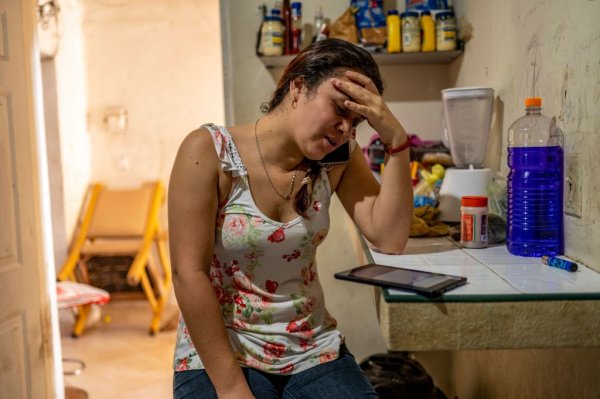 'Remain in Mexico' Winds Down, More Than 4,600 Are Left Out
Next Up: Editor's Pick