In Europe, Joe Biden Tries to Reset Relationships After Trump

Former President Donald Trump often used his appearances at international summits to unload insults, badger world leaders and exert his dominance over America’s traditional allies. Now, Joe Biden is using his first major foreign trip as President to prove things will be a little different under his leadership.

As Biden spends the weekend eating gazpacho and locally caught fish at the G7 Summit on the southwest tip of England before heading to Brussels to meet with North Atlantic Treaty Organization (NATO) and European Union leaders, he’s working to repair relationships strained by Trump’s unpredictable and rough diplomatic style. And he’s deploying hokey jokes to do it. When Biden stood for photographs in front of the turquoise waters of Carbis Bay on Friday afternoon, he looked at the press, cocked his thumbs to the waves, and cracked, “Everybody in the water.”

Standing on the same beach the evening before, U.K. Prime Minister Boris Johnson seemed to revel in the more relaxed change in tone from the Trump era. “It’s wonderful to listen to the Biden Administration and to Joe Biden because there’s so much they want to do together, with us, on security, NATO, to climate change,” Johnson said. “It’s fantastic. It’s a breath of fresh air, a lot of things they want to do together.”

Biden’s trip to the G7 Summit and the NATO meeting is both a challenge and an opportunity for him to reset American diplomacy after four years of Trump’s confounding behavior. “Diplomacy is first and foremost about showing respect, and that is clearly something Trump was incapable of doing, and that is why we lost so much influence,” says Brett Bruen, a former director of global engagement in President Barack Obama’s White House. But European leaders want to see Biden working on details for solutions to major problems, like the pandemic and climate change, and “not just a press release put out,” Bruen says. “There’s going to be some pressure from these other leaders to say, ‘What does it mean when you’re saying that the United States is going to work on rebuilding trust and credibility?’”

Biden on Friday spearheaded a promise from the countries at the summit to deliver 1 billion vaccines around the globe, with the U.S. contributing 500,000 vaccines. Over the next several days, Biden will meet with allies to outline ways to work together on containing the pandemic, climate change and the rising power of China, as well as trying to get European allies to send a united message to Russian President Vladimir Putin to stop an escalating set of provocations aimed at destabilizing Russia’s rivals, including the U.S.

It’s a far cry from the days when Trump regularly shattered diplomatic protocols and decorum. During his first major European trip in May 2017, Trump roughly pushed aside the Prime Minister of Montenegro during a tour of NATO’s new headquarters to stand next to Secretary General of NATO Jens Stoltenberg just as the group of leaders stopped in front of a bank of press cameras.

A year later, in May 2018, Trump gave an interview to the Sun just before meeting U.K. Prime Minister Theresa May, saying she “wrecked” Brexit and implying Johnson would do better in her job. On that same trip, in Brussels, just before sitting down with Chancellor Angela Merkel, Trump accused Germany of being “totally controlled” and “captive to Russia.”

Then there was the time during the NATO Summit in London in December 2019 when Trump called Canada’s Prime Minister Justin Trudeau “two-faced” after microphones picked up Trudeau marveling to other world leaders about how much time Trump spent taking unplanned questions from the press. On the same trip, Trump joked he could send ISIS fighters to France during a tense meeting with France’s President Emmanuel Macron.

Even though he was willing to publicly criticize allies, in July 2018, after their notorious summit in Helsinki, Trump balked at criticizing Russian President Vladimir Putin, one of the U.S.’s most meddling rivals, on the world stage. Biden now has the chance to repair the damage. Asked Friday by reporters what his message to Putin will be when the two meet in Geneva on June 16, Biden smiled and said, “I’ll tell you after I deliver it.”

Read More: Biden Plans to Put Pressure on Putin in Geneva. Will It Work?

Biden’s approach to foreign policy is already having an impact on how the U.S. is viewed by the world. The percentage of people around the globe who have a favorable view of the U.S. jumped from 34% at the end of the Trump Administration to 62% five months into the Biden Administration, according to polling released on June 10 by the Pew Research Center.

But in some ways, Trump’s presidency has remade the global dynamic in ways that won’t be easily reversed. Trump’s drive to pull the U.S. out of international agreements like the Paris climate accords and the Iran nuclear deal gave Europe additional international influence and made European countries more important counterweights to China and Russia, Bruen says. European leaders don’t want to give that up. “They want to continue to play a robust role,” Bruen says, “in not just supporting American foreign policy, but in driving the global agenda.” 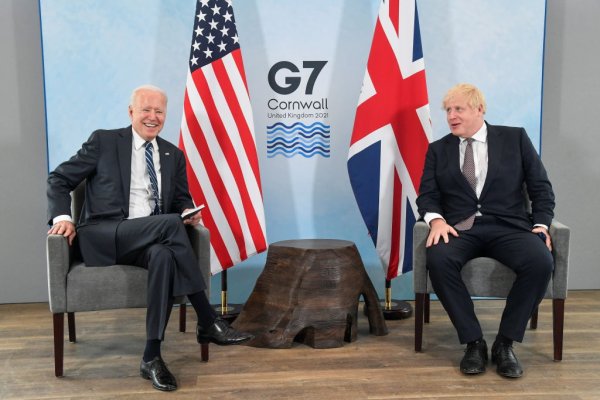 A Diplomatic Spat Shook Up Biden's First Day in the U.K.
Next Up: Editor's Pick