Pro-Russian protesters burn tires on the outskirts of the eastern Ukrainian city of Slovyansk on April 13, 2014
Anatoliy Stepanov—AFP/Getty Images
By Sam Frizell

Ukrainian President Oleksandr Turchynov promised in a televised address Sunday a “large-scale anti-terrorist operation” in order to prevent “the repetition of the Crimean scenario” following the death of a Ukrainian security officer during a shoot-out in the country’s eastern region.

A Ukrainian security officer was killed and five others were wounded Sunday after special forces exchanged fire with a pro-Russia militia in an eastern Ukrainian city, Ukraine’s Interior Minister said. The skirmish was the first reported gun battle in eastern Ukraine, where armed pro-Russia groups have seized law-enforcement buildings throughout the region.

Ukraine’s Interior Minister Arsen Avakov said the Security Service officer was killed in Slovyansk, where a police station was seized Saturday by camouflaged armed men demanding autonomy from Kiev. Avakov said in a Facebook post that the men who seized buildings in Slovyansk opened fire on Ukrainian special forces sent to the city Sunday, the Associated Press reports. He also described the unrest as “Russian aggression.”

The U.N. Security Council has called a Russia-requested emergency meeting for Sunday evening to address the growing tensions in eastern Ukraine.

NATO Secretary-General Anders Fogh Rasmussen on Sunday compared the escalating tension in eastern Ukraine to events last month in Crimea. Rasmussen said he was troubled by “a concerted campaign of violence by pro-Russian separatists, aiming to destabilize Ukraine as a sovereign state.” NATO believes Russia has amassed up to 40,000 troops in more than 100 locations along its border with Ukraine.

In a recent phone call with Russian Foreign Minister Sergei Lavrov, U.S. Secretary of State John Kerry “expressed strong concern” that the attacks “were orchestrated and synchronized, similar to previous attacks in eastern Ukraine and Crimea.” Kerry emphasized that if Russia did not de-escalate the situation, there would be further consequences in addition to a litany of sanctions imposed on Russian officials last month.

Lavrov told Kerry that Russia may pull out of the Ukraine summit if Kiev uses force against “residents of the southeast who were driven to despair.” He blamed the crisis on the failure of the Ukrainian government to mediate with the Russian-speaking population.

U.S. Vice President Joe Biden is set to visit Ukraine later this month ahead of the country’s presidential election scheduled for late May. 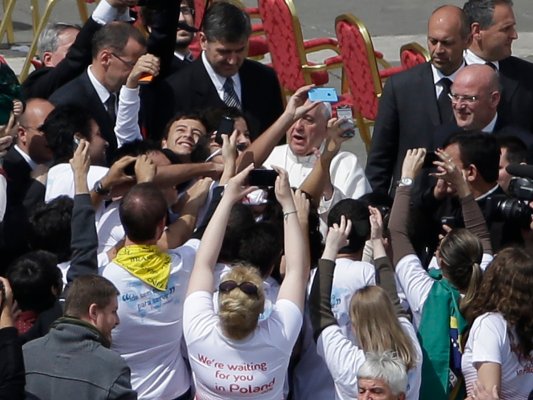 Pope Takes Selfies With Crowd After Homily
Next Up: Editor's Pick