When director Jon M. Chu first saw the musical In the Heights on Broadway in 2008, his imagination whirred to life with possibilities. “Imagine if this was in a tunnel and the tunnel lights up?” he remembers thinking while sitting in the theater. “Imagine if you could look through a window of somebody dreaming, and the community could be reflected in the reflection?”

More than a decade later, Chu is bringing these reveries to life as the director of the musical’s film adaptation, which arrived in theaters and on HBO Max on June 11. While other recent film-to-stage adaptations—like Ma Rainey’s Black Bottom and One Night in Miami—have leaned into the intimate, contained aesthetic of theatrical performances, Chu’s In the Heights has the ambition and scale of the most epic blockbuster films, complete with hundreds of extras and dancers, vibrant animated graphics, gravity-defying Fred Astaire-inspired dance numbers, and plenty of slick camerawork and tricks of light.

“We want it to feel like a vintage musical that you found, but done in a way that was never made back then,” Chu says. “We wanted to use music or dance the way a street dancer uses music and dance: when words aren’t enough to tell their story.”

His creative choices mean that certain scenes look and feel remarkably different from how they appeared on Broadway. TIME took a deep dive into the translation of three key musical numbers—“It Won’t Be Long Now,” “Paciencia Y Fe,” and “When The Sun Goes Down”—along with Chu, screenwriter Quiara Alegría Hudes (who also co-wrote the original musical) and choreographer Christopher Scott. Here are excerpts from those conversations.

This article contains spoilers for In the Heights.

Melissa Barrera and Anthony Ramos in "In the Heights."
Courtesy of Warner Bros. Pictures

In the original Broadway musical, the character Vanessa is defined more by Usnavi’s obsession with her than attributes of her own. “Personally, I’ve always wondered not just what she’s running away from, but what she’s running toward—what’s her dream?” Hudes says. “And does Usnavi just like her because she’s hot? If so, that’s kind of lame.”

When given the chance to revise the character, Hudes decided to imbue the origins of their love story with an artistic aspect: Vanessa (played in the movie by Melissa Barrera) doodling in her notebook in class with dreams of being a fashion designer, and Usnavi (Anthony Ramos) being captivated by those visions. In the film, “It Won’t Be Long Now,” Vanessa’s sole solo song, is no longer just a plea to escape Washington Heights, but a reflection of her creative and professional aspirations. “The audience gets to see the world through her eyes,” Chu says.

In the second verse in the stage version, Vanessa fends off catcallers on the streets. Hudes and Chu didn’t change any lyrics—but they decided to move that verse downtown, where she blows by corporate leafleters and scrounges for clothing materials from the dumpsters of the Fashion Institute of Technology. “She would kill to have the opportunities that Nina had, is the truth,” Hudes says. “But she doesn’t have those opportunities, so a dream that’s a little more attainable and close is FIT.”

Chu says filming downtown was a completely different experience than filming in Washington Heights. “People are way more rude. Nobody wants to interact, they just ignore you or they yell at you. Whereas in the Heights, they’ll just sit right next to you and be like, ‘what are you guys doing? Do you want a beer?’”

Olga Merediz in "In the Heights."
Courtesy of Warner Bros. Pictures

“Paciencia Y Fe” is one of the most important songs of the musical. A torch ballad sung by Abuela Claudia (Olga Merediz, who reprises her stage role in the film) about her arduous journey from Cuba to the United States, the song was key to Merediz receiving a Tony nomination for the role. But Chu and his team also agonized over where to place it in the rearranged film, especially given that Hudes and Chu had decided to move the song’s climactic reveal—that Abuela Claudia won the lotto—to the end of the film. “I didn’t want there to be a sense from the audience that the winning lottery ticket is what solves their problems,” Hudes explains.

Originally, Merediz was going to break into “Paciencia Y Fe” while showing her napkins to the owner of a new dry cleaning business, whose presence speaks to how the block is gentrifying. But Chu felt the song didn’t feel earned so early in the film and in such a relatively inconsequential scene. The team also discussed making it her death scene, but were worried about creating an exhausting 14-minute block of straight music, preceded by “The Club” and “Blackout” and succeeded by “Alabanza.”

Ultimately, Chu’s editing team found a way to put it in that slot by finessing its intro and outro. Meanwhile, Hudes was further persuaded that the song should mark Claudia’s death due to a new lyric Miranda had written to replace the line about her lottery ticket: “I made it through, I survived/ I did it/ Now do I leave or stay?”

“When you hear that lyric, it sounds like she’s asking a much bigger life question than where she wants to receive her mail,” Hudes says. “I couldn’t unsee it.”

The ensuing scene in the film takes place in an abandoned train station in which Abuela Claudia and dancers weave in and out of historic train cars rented from the New York Transit Museum. Hudes says the idea for the shot came to her while on the subway: “You know when you’re going through the subway tunnel and the windows are dark and they’re very reflective, and you pass the lights and there are things going by? I imagined that as a screen that her memories of Cuba were playing on,” she says.

To fill out the scene, choreographer Christopher Scott employed two sets of dancers: one troupe to represent Cuba, and the other to represent New York. “We created a little bit of different styles: New York had a more uptight and upright posture, while the Cuba stuff was rounded out in the chest,” Scott says. “We also wanted to tap into the concept of the cultural dances of Cuba that have been imitated and kind of lost in translation, with ballroom doing rumba, for example.”

“When the Sun Goes Down”

Near the end of the film, “When the Sun Goes Down” features Benny (Corey Hawkins) and Nina (Leslie Grace) dancing on the side of a building as they reaffirm their love and commit to a long-distance relationship. In most stage versions, including on Broadway, the song is staged statically, with the couple simply standing and singing to each other. Many members of the creative team, including Hudes, were unaware that Chu had something other than that approach planned for the song until the day before the table read. Chu’s reticence was intentional: “I knew if you pitch a spinning building to the studio, they’re gonna be like, ‘What are you talking about? No way,’” Chu says, laughing. “But if they saw a few things already in place and are comfortable, then maybe squeezing in one crazy number might be okay.”

Chu and Scott have longed to create a gravity-defying dance sequence for a long time, inspired by the Fred Astaire film Royal Wedding (seen below). The pair are longtime collaborators: Chu cast Scott as a dancer in 2008’s Step Up: 2 The Streets, and then tapped him to choreograph the web series The LXD: The Legion of Extraordinary Dancers in 2010. They decided that “When The Sun Goes Down” would be the perfect time to try to execute their long-held vision, because “the rules of the world don’t matter when you’re in love,” Chu explains.

Executing that vision, however, was a whole other endeavor. It required the production team to build a giant set that swings ninety degrees while Grace and Hawkins are standing on top of it; Chu and Scott also wanted to film the gravity switch in one long cut and without the actors being attached to any safety cables. “It was a lot of money for that, and very dangerous actually,” Chu says. “We didn’t get that thing built until a week before we were shooting—so they could only rehearse on the ground.”

Another agonizing technical issue was the light source. Because the scene is set outside, the sun cannot move even when the world’s entire orientation shifts. “If their shadows move, you know the sun isn’t the sun,” Chu says. That required building a swivel for a giant overhead light that pivots at the exact same rate as the building, which was, in Chu’s words, “a pain in the butt.”

After all the structures were built, Scott worked with Grace and Hawkins on the mechanics of dancing on a spinning wall while Chu shot scenes on another soundstage. The result was, as Chu says, “a Fred Astaire and Ginger Rogers number but done in the Washington Heights way.”

“Those rules of the world were so heavy on Nina and Benny the whole movie, and at a certain point, let that go and you feel free,” Chu says. “We wanted to see them take flight.” 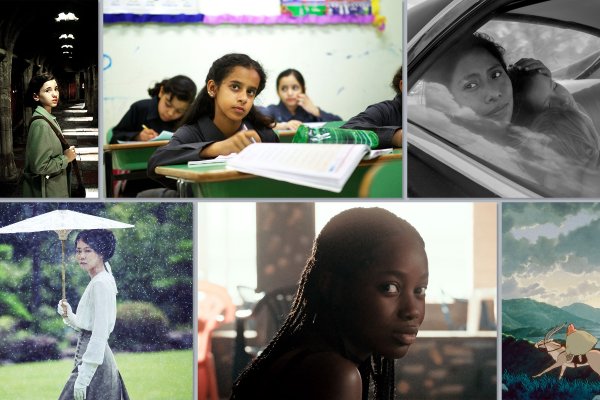 The Best International Movies on Netflix
Next Up: Editor's Pick