More Vaccine-Hesitant Hongkongers Are Finally Signing Up for COVID-19 Shots. Is It Because of the Give-Aways, or the Outbreak Nearby?

A man in a facemask walked past a COVID-19 vaccination center in Hong Kong on March 25, 2021. After a sluggish vaccination, more Hong Kong residents are finally signing up for their first shots in June.
Olivier Chouchana–Gamma-Rapho/Getty Images
By AMY GUNIA / HONG KONG

For months, Hong Kong’s leaders have fretted about the city’s low COVID-19 vaccination rates. Despite vaccines being plentiful, free and available to anyone who wants one at a slew community health centers, just 18% of the city’s 7.5 million people chose to get a shot between February and the end of May.

But, there are signs that some of that vaccine hesitancy may be subsiding. In the last three weeks, the average number of people receiving their first COVID-19 shot each day has more than doubled, and the portion of residents with at least one dose has climbed to nearly 22%.

It’s a trend that coincides with two developments.

First, businesses in the Chinese territory began giving away a diverse array of high-end prizes, totaling an estimated $15 million, for residents who get the jab. The offerings include a private party on an Airbus A321neo passenger plane, gold bars worth more than $130,000, a Tesla Model 3 Long Range and, most notably, a $1.4 million apartment—an eye-catching prize in one of the world’s most expensive real estate markets.

The other development is a COVID-19 outbreak involving the more contagious Delta virus variant across the border in the Mainland city of Guangzhou, which authorities are struggling to contain. Some Hong Kong residents have family in Guangzhou, and the cities have strong economic ties, as well.

It’s not clear which impulse is driving more people to vaccination clinics—the chance to win fabulous prizes, or the fear of a new outbreak—but convincing Hongkongers, one of the most hesitant populations in the developed world, to get the COVID-19 vaccine could offer lessons for reaching other vaccine-hesitant communities.

“In the last week or two there has been a bump in the levels of interest in getting vaccination in people who have not yet received vaccination,” says Ben Cowling, an infectious disease epidemiologist at the University of Hong Kong (HKU). “Some of that could be due to the latest incentives.”

The roots of COVID-19 vaccine hesitancy

There are myriad reasons for Hong Kong’s uninspiring vaccination rates—including low trust in the Hong Kong government and Hong Kong’s relatively good handling of the pandemic so far. A YouGov survey of 21 places around the world found Hong Kong residents had the most vaccine hesitancy—with just 37% of respondents saying they had been or would like to get vaccinated. For the U.S., that number was 69%.

Many residents don’t feel they need a vaccine to protect themselves, unlike places like the U.S. and U.K., which experienced severe outbreaks and used vaccinations to help suppress COVID-19. But the surge in cases in the region driven by new variants could be instilling a sense of urgency to get vaccinated, which experts say is crucial to prevent a fifth wave of infections in the city.

Hong Kong ended a 42-day streak of zero untraceable local infections on June 5 when it confirmed a case involving the Alpha coronavirus variant, first discovered in the U.K. Just across the border in Guangdong province, Chinese authorities have implemented lockdowns and mass testing over an outbreak driven by the variant first found in India.

Elsewhere in the region, Taiwan is in the grip of its first major COVID-19 surge since the pandemic began. Countries across Southeast Asia are battling worrying outbreaks, and Japan is fighting a stubborn fourth COVID-19 wave.

A surge in vaccine interest following a surge in infections is not uncommon—Taiwan and India are among the places where demand for COVID-19 shots languished until cases spiked.

Do prizes convince people to get vaccinated?

Pedestrians walk past the Grand Central (R) residential building complex in Hong Kong on May 28, 2021, where a 1.4 million USD (10.8 million HKD) one-bedroom apartment has been offered for a lucky draw's grand prize for which all Hong Kong residents aged 18 and above who have received both doses of the COVID-19 vaccines will be eligible to register.
Anthony Wallace—AFP/Getty Images

Hong Kong isn’t the only place experimenting with giveaways to convince people to get jabbed—several U.S. states are offering lottery prizes, some with multimillion dollar payouts. President Joe Biden announced a package of incentives ranging from free beer to childcare and a district in northern Thailand is raffling off live cows. But Hong Kong’s growing vaccine lottery may be the most diverse anywhere in the world.

Among the prizes for grabs include a year of free stays at the luxury Shangri-La Hotels, a vintage diamond-encrusted Rolex, rare tea leaves that legend says once cured an emperor’s ailing mother and health insurance. A bank is offering inoculated people a higher-than-average interest rate. A financial services company is handing out stock in an environmental company worth about $200,000.

Hong Kong’s airport authority will give away 60,000 air tickets and 500 people will win unlimited rides on the city’s subway system for a year. Even the Hong Kong’s gas utility is offering giftcards in a giveaway.

Paul McGarry, the head of Asia at the Goodman Group, who is offering the Tesla, tells TIME that he noticed hesitancy among his staff and the wider community to get vaccinations after the city’s vaccine drive began in February. “The common message I heard was ‘I’ll sign up later,'” he says.

“We thought this could be a good way to generate some publicity for the vaccination program and by putting a timeline on it, a sense of urgency,” says McGarry.

Read More: Hong Kong Is Testing Out a Vaccine Passport for Bars. Will It Boost Lackluster Vaccination Rates?

Most of the prizes up for grabs are being offered by the private sector. Many companies in Hong Kong are also giving their staff incentives to get vaccinated, including cash bonuses and extra time off (Goodman, a global property group, reached a 100% vaccination rate among its staff after offering $1,100 to get a shot by the end of May).

“We think that vaccines are an important step for Hong Kong being able to return to a pre-pandemic way of life,” says McGarry. “We wanted to do whatever we could do as good corporate citizens, hopefully others follow with their own incentives and lotteries.”

But experts say the measures still might not be enough to sufficiently improve vaccination levels. Current HKU estimates show that only about 55% of the population are interested in getting vaccinated by September, when many of the community vaccination centers will shutter.

Cowling and other experts are beginning to urge the Hong Kong government to offer bigger-picture incentives. The government has made minor concessions to the social distancing rules, but it has yet to make meaningful changes for vaccinated people. Vaccinated people can go to bars and nightclubs and stay later in restaurants. Border quarantine measures, which are among the strictest in the world, have been reduced from 21 to 14 days for vaccinated travelers arriving from most countries.

Cowling says relaxing measures like the requirement for quarantine for incoming travelers could help convince people to get vaccinated.

The list of items that vaccinated people can win continues to grow for Hong Kong’s vaccine giveaways, most of which require entrants to have received both jabs by the end of August or the beginning of September to be eligible.

It remains to be seen how high the growing prize list will push the city’s vaccination rates, but McGarry says he’s been inundated with questions about when the lottery opens and how people can sign up to win the Tesla. 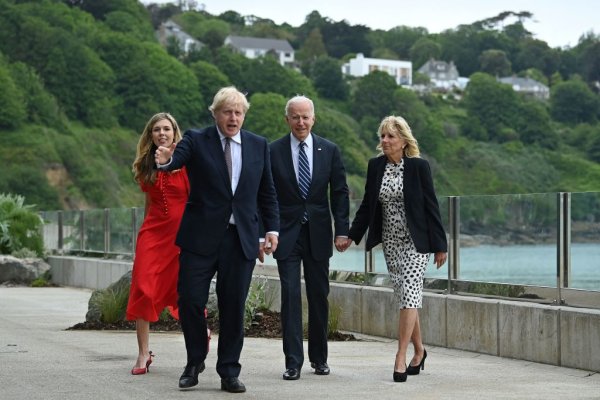 Will G7 Leaders Step Up to Finance Fighting Climate Change?
Next Up: Editor's Pick