They called it an “exposé.” On Saturday, Chinese state broadcaster CCTV published a report on the flourishing sex trade in the southern city of Dongguan. Using concealed cameras, they showed women dancing in a Karaoke club and lining up for selection by customers. “No police are coming,” a hotel clerk says. “We would have been put out of business long ago if they had come.”

But shortly after the piece was broadcast, a crack team of local officers swooped in. A 6,000-strong force reportedly raided 12 hotels and entertainment venues leading to 67 arrests — 90-odd cops for each of the alleged perpetrators. Two police chiefs were later suspended, according the South China Morning Post.

The idea of “exposing” China’s sex industry is frankly absurd, which is why the story swiftly became a Monday morning joke here. You don’t need a hidden camera to find dancing girls in Dongguan — you need eyes. For decades, the steamy manufacturing hub has been known as China’s sin city, a place where business deals are sealed with hookers, and massages are anything but medicinal. Last time I stayed there, I awoke to find a clutch of sexy business cards shoved under my hotel room door.

The police, for the most part, turn a blind eye — or worse, turn a profit. Though prostitution is widespread, it is illegal under Chinese law. This puts sex workers at risk. Last year, a 51-page Human Rights Watch report, Swept Away: Abuses Against Sex Workers in China, documented torture, beatings, physical assaults, arbitrary detentions and fines. Another report, by Asia Catalyst, found that escaping custody meant paying bribes.

Periodic ‘busts’ focus on shaming women, not stemming the trade. In a now-notorious 2010 case, Dongguan officials publicly paraded male and female suspects, barefoot and handcuffed, through the street. The photographs that accompanied this weekend’s raid stuck to this script, showing lines of young women on the ground, heads bowed.

But judging by comments on media coverage, China’s netizens know where the real shame lies.”You can’t do this business without the police backing you up,” wrote one. “To clean your so called police troops, that’s what people really want to see.”

“What’s the use in arresting these vulnerable people?” asked another. “Arrest 67 officials. Don’t treat us like idiots.”

—With reporting from Chengcheng Jiang in Beijing. 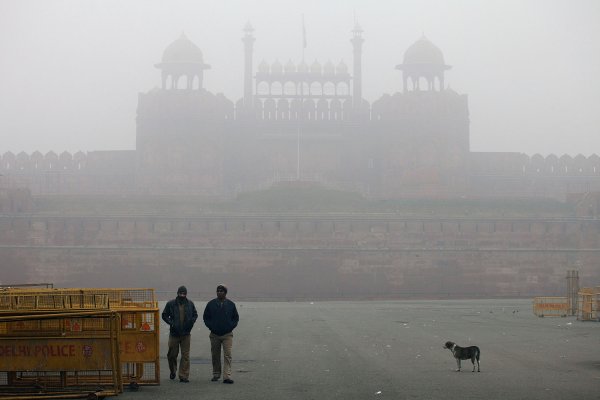 Delhi's Air Has Become a Lethal Hazard and Nobody Seems to Know What to Do About It
Next Up: Editor's Pick