Why It's Crucial to Talk to Kids About Gender Pronouns

It’s only been a week since Katherine Locke’s newest book was published, and they’ve already received messages from parents of trans and nonbinary children saying how much it spoke to them. The book, What Are Your Words?, tells the story of a kid named Ari, who is gender fluid and nonbinary and tries out different pronouns depending on how they feel on different days. Aimed at readers aged 4 to 8, the book follows Ari and his nonbinary uncle Lior as they try to figure out what words fit them.

“I certainly didn’t grow up talking about pronouns that weren’t she/her, he/him, and I didn’t know how to have these conversations either,” says Locke, who released their first picture book last November and has previously written novels for young adults and adults. “It’s been really gratifying to see people embrace the book and its concepts.”

With colorful illustrations by Anne Passchier, the book emphasizes that pronouns are one part of a full identity, as Ari introduces Lior to their neighbors and shares each person’s pronouns, occupation and adjectives to describe them. Locke was keen to highlight the bigger picture of people’s full humanity beyond gender identity as well as focus on Ari’s words and feelings about their words, rather than labeling their gender on the page.

In recent years, parents and young readers have seen a greater number of children’s books about gender identity, as well as diverse experiences and social justice issues more broadly, available on the market. Four transgender teenagers authored a series of books published in April this year, aimed at elementary school students, drawing from their lived experiences for titles including A Kids Book About Being Transgender and A Kids Book About Being Non-Binary. These new releases, as well as Locke’s latest title, come amid a record year of anti-transgender legislation across the U.S., with 33 states introducing more than 100 bills largely targeted at rolling back the rights of trans youth.

Locke spoke with TIME about the importance of young readers learning about pronouns, efforts to normalize different pronouns, and the fluid nature of gender identity.

TIME: Why did you feel compelled to write Ari’s story in What Are Your Words?, and why now?

Locke: It felt like the right time to start having these conversations for a younger audience. I really wanted to tell it through a narrative with a character, versus something that was more teaching. I wanted to give kids the opportunity to see themselves in Ari, or to see Ari as a friend. I use they/them, I’m nonbinary. Anne Passchier, who is the illustrator, is also nonbinary and uses they/them, so it was a really personal project for the two of us. We’re really proud to be sharing our story with everybody.

While there are more and more books out there for young readers that discuss gender identity, there are few that explicitly focus on teaching inclusive pronouns and the act of asking for someone’s pronouns. Why do you think that is?

I think that the growth of gender identity books for kids is really great. Kids are more likely to understand a wide spectrum of gender, whereas we as adults kind of lose that skill as we grow up. People forget that pronouns are not just for trans and nonbinary people—cis people use pronouns too. We all have pronouns. The book was an opportunity to talk about words that are really personal and important.

What does the act of asking for someone’s pronouns look like for you?

For me, and I can’t speak for everybody, “What pronouns do you prefer me to use?” and “What are your pronouns?” are two ways that you can ask me or other people. Sometimes I will say, “are there pronouns you want me to use in this context?” For some people, they use certain pronouns at work that they might not use elsewhere. They might be protective of their identity in certain places.

I think that those are really gentle, respectful ways of asking, and you don’t have to hold those questions just for people you think are trans or nonbinary. It’s really important that we normalize asking about pronouns because some people pass, some people’s presentation may not match your idea of what their presentation is, may not match their gender identity and their pronouns. I have really long hair right now, and lots of people use she/her for me, but she/her are not my pronouns.

By removing expectations and judgment, we expand our idea of gender, and we open up the door for more people to express themselves fully and be themselves fully. It’s really about shedding our preconceptions of what cis people and trans people and nonbinary people look like.

And conversely, how can asking with respect and sensitivity around pronouns have positive impacts?

To hear people use they/them for me, despite the octave of my voice, and the length of my hair, feels like someone is really seeing me and understands me, and respects me in a way that I didn’t realize I needed before I started using “them,” which was about three or four years ago now. It’s a very welcoming feeling, it releases this anxiety, and it allows people to be the most creative, productive and mentally well that they can be.

I think that’s really important for kids. We know that trans and nonbinary kids have higher rates of mental illness, depression, suicide, suicidal ideation. Building this wellness and respect for kids in their gender identity from an early age can only lead to a more healthy and robust kid, and then adolescent and young adult. Healthy children includes their mental health, and their mental health includes seeing them as they are, and that might mean that your kid is trying on different pronouns and gender identities. Kids can be fluid, and moving with the child is going to be so much more beneficial to them, regardless of where they land with their gender and their pronouns, than trying to force them into a box that we scientifically know causes children damage.

The book features several neopronouns like ze/zir and ey/em that general audiences might be less familiar with. Can you tell us more about the emergence and importance of these?

Pronouns are evolving, and language is evolving. People are figuring out what words fit them best. It might not be a word that is in common usage, and that doesn’t make it less valid. There’s no sense in pretending they’re not being used, because they are. If they work for one kid that reads this book, it was worth including all of them.

The book talks about how sometimes your words might change at different times or on different days. Is that fluid nature of identity something you were particularly keen to highlight?

That was in the book from the very beginning. I really felt like it was important to show that kids can experiment with words, and in the same way that yesterday you felt excited and today you don’t, your pronouns can shift depending on how your gender feels that day, and where you are. Ari is a kid, and there’s nothing about them that is set in stone. We’re not full people when we’re five years old. We get to change who we are and who we want to be as much as we want when we are kids.

What impact do you hope this book will have, on both children and parents?

I hope that it’s a conversation starter, an opportunity for parents and children to talk about those children’s gender identities, and their pronouns. But also, their classmates and other kids they see at the library, or someone they see at the park, or their cousins. It might not be that particular child reader who is trans or nonbinary, but someone they know is probably going to be trans or nonbinary at some point in their life. Making sure that those kids have that language, and that their parents and guardians and librarians and teachers all have the language to have those conversations is really important. I hope that there are kids who find their words by reading Ari’s story.

In recent weeks, social media platforms like LinkedIn and Instagram have built in pronoun options into profile information, and in recent years, there have been more efforts in workplaces to include pronouns in email signatures. How do you feel about these efforts to normalize pronouns?

I think that all of those efforts, especially on social media platforms, are really great. I love when I see someone’s pronouns in their signature when they email me, because that makes me automatically feel as a nonbinary person, that they are a safe person for me to be out to. I think pronouns should be optional in workplace signatures, because it could lead to somebody either misgendering themselves, or outing themselves in a place where they’re just not ready for that. But I do think that it’s really important for cis allies to be using that feature as much as possible because it creates space for trans and nonbinary co workers and people in their lives to be out.

How do you feel about the moment we are in right now, regarding both increased visibility of trans and nonbinary folks, amid a backdrop of anti-trans legislation across the U.S.?

It’s a tough moment, and I know I have a lot of privilege in this moment. I am really heartbroken by all the anti-trans legislation, specifically the ones that target children. It’s just unfathomable for me to comprehend what it must be like to be a young trans kid, out or not out, who’s hearing politicians and high-profile figures say the kind of hateful things that are being said, and how damaging that must feel.

I am heartened by actors and other people who have been coming out—Demi Lovato gave me such joy the other week. I really love to see that, and I hope that they can be role models. But role models aren’t enough to outweigh the practicalities of what some of this legislation is trying to do. It’s a tough moment for trans kids and for their families. And we just have to be countering it at every possible level, local and state, especially to ensure that we’re protecting kids who are really vulnerable. 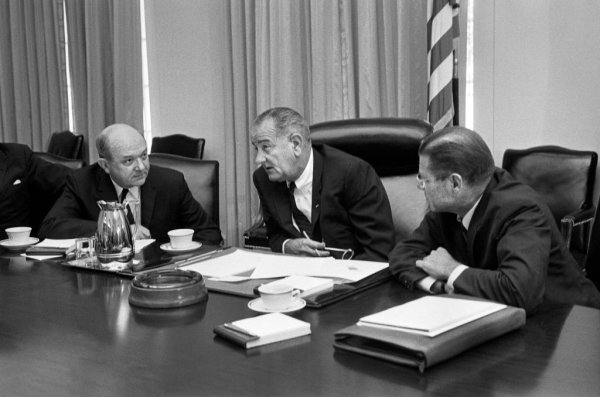 How Robert McNamara Came to Write His Memoirs About Vietnam
Next Up: Editor's Pick