TORONTO — Prime Minister Justin Trudeau said Monday it ’s not an isolated incident that over 200 children were found buried at a former Indigenous residential school.

Trudeau’s comments come as Indigenous leaders are calling for an examination of every former residential school site — institutions that held children taken from families across the nation.

Chief Rosanne Casimir of the Tk’emlups te Secwepemc First Nation in British Columbia said the remains of 215 children, some as young as 3 years old, were confirmed this month with the help of ground-penetrating radar. She described the discovery as “an unthinkable loss that was spoken about but never documented” at the Kamloops Indian Residential School, the largest such school in the country.

“As prime minister, I am appalled by the shameful policy that stole Indigenous children from their communities,” Trudeau said.

“Sadly, this is not an exception or an isolated incident,” he said. ‘’We’re not going to hide from that. We have to acknowledge the truth. Residential schools were a reality — a tragedy that existed here, in our country, and we have to own up to it. Kids were taken from their families, returned damaged or not returned at all.”

From the 19th century until the 1970s, more than 150,000 First Nations children were required to attend state-funded Christian schools as part of a program to assimilate them into Canadian society. They were forced to convert to Christianity and not allowed to speak their native languages. Many were beaten and verbally abused, and up to 6,000 are said to have died.

The Canadian government apologized in Parliament in 2008 and admitted that physical and sexual abuse in the schools was rampant. Many students recalled being beaten for speaking their native languages. They also lost touch with their parents and customs.

Indigenous leaders have cited that legacy of abuse and isolation as the root cause of epidemic rates of alcoholism and drug addiction on reservations.

A mother hugs her daughter during a vigil in Toronto on Sunday May 30, 2021, for the 215 Indigenous children, whose remains were uncovered on the grounds of a former residential school near Kamloops, British Columbia.
Chris Young/The Canadian Press via AP

Plans are underway to bring in forensics experts to identify and repatriate the remains of the children found buried on the Kamloops site.

Trudeau said he’ll be talking to his ministers about further things his government needs to do to support survivors and the community. Flags at all federal buildings are at half-staff.

“This is not a surprise. This is a reality of residential schools,” Singh said.

The Kamloops school operated between 1890 and 1969, when the federal government took over operations from the Catholic Church and operated it as a day school until it closed in 1978.

Richard Gagnon, archbishop of Winnipeg and president of the Canadian Conference of Catholic Bishops, said he wanted to express “our deepest sorrow for the heartrending loss of the children at the former Kamloops Indian Residential School.”

The National Truth and Reconciliation Commission has records of at least 51 children dying at the school between 1915 and 1963. The Commission identified about 3,200 confirmed deaths at schools but noted the schools did not record the cause of death in almost half of them. Some died of tuberculosis. The Commission said the practice was not to send the bodies of the students who died at the schools to their communities. The Commission also said the government wanted to keep costs down so adequate regulations were never established.

“This discovery is a stain on our country. It is one that needs to be rectified,” Opposition Conservative lawmaker Michelle Rempel Garner said.

Empty pairs of children’s shoes have been placed at memorials throughout the country.

Perry Bellegarde, chief of the Assembly of First Nations, has said while it is not new to find graves at former residential schools, it’s always crushing to have that chapter’s wounds exposed.

The Federation of Sovereign Indigenous Nations and the Saskatchewan government said they want Ottawa to help research undocumented deaths and burials at residential schools in the province.

Federation Chief Bobby Cameron said finding the children’s remains and giving them proper burials is important to help First Nations communities and families find closure. The federation has compiled a list of initial sites where it hopes to complete radar ground searches.

Sol Mamakwa, an opposition lawmaker with the New Democrat party in Ontario, also called on the government to search the grounds of other former residential schools. 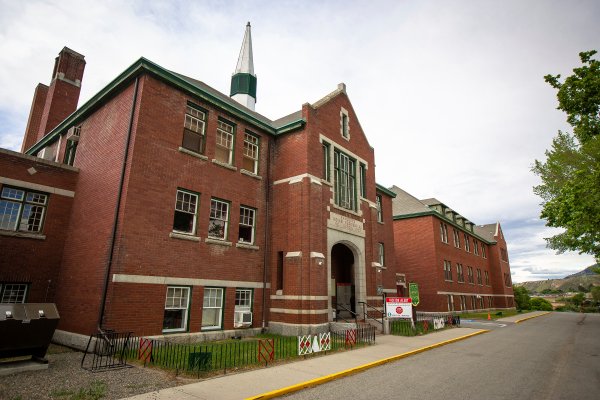 Over 200 Bodies Found at Canada Indigenous School
Next Up: Editor's Pick