Subrahmanyam Jaishankar is on a thankless mission. For the Indian external affairs minister, the official trip to the U.S. this week—the first by a senior Indian minister since President Joe Biden took office—is awkwardly timed, coming as it does on the heels of a dust-up between the Indian government and American social media platforms Twitter and WhatsApp. As if his core task on the trip—procuring COVID-19 vaccines for India—wasn’t challenging enough.

India continues to reel from a severe coronavirus outbreak, with more than 200,000 reported cases and 4,000 deaths recorded each day—a tragedy made worse by an acute vaccine shortage. Jaishankar is tasked with meeting top U.S. officials and vaccine manufacturers to secure supply deals. Biden has agreed to ship 80 million doses of vaccine to needy countries, and India hopes to land as many of those as it can. It needs vaccine desperately; vaccination numbers for May dropped by half from April. More than 1 million Indians are estimated to have died in the pandemic (the official death toll is 315,000, which most experts agree is grossly understated.)

India has come a long way in a short time—from the swaggering Vaccine Guru boasting about saving the world, to desperately scouring the globe for vaccines. For the world’s biggest vaccine manufacturer, it’s not easy to go hat-in-hand asking for vaccines, and India’s foreign minister, suave and well-spoken, is trying to keep it classy.

He is making pious noises. Countries must look beyond their “national interests” for “global good,” he said at a Hoover Institution engagement. Funny he should mention that, because it’s India’s vaccine nationalism—along with Prime Minister Narendra Modi’s empty showboating—that not only plunged India into an unexpected vaccine shortage, but also put countries banking on vaccines from India at great risk.

India has now blocked vaccine exports in order to prioritize vaccinating its own citizens—simply grabbing the vaccines meant for others. This is threatening to wreck the global COVAX program meant to ensure equitable vaccine distribution to help poor nations, creating the risk of a prolonged pandemic for the whole world.

The vaccine crisis that stares at the world’s most vulnerable countries today is rooted in Modi’s mind-boggling reluctance to buy enough vaccines in time. As early as August 2020, Modi grandly declared that India had already worked out a vaccine distribution plan. Yet, he placed the first vaccine order as late as January 2021. And, even then, bought little. The result: by the time the second wave hit India with full intensity in April, just 0.5% of Indians had been fully vaccinated. The figure currently stands at a measly 3.1%. No national leader has talked so much about vaccines and done so little about it, and Indians are not the only ones paying the price for it.

Serum Institute of India, maker of the Oxford-Astra Zeneca vaccine that accounts for 90% of Indian COVID-19 doses, was slotted to supply half of the 2 billion vaccines for COVAX this year. But it has stopped shipments since March and says it can’t restart supplies until the end of the year. Facing pressure for vaccines at home and abroad, owner and CEO Adar Poonawalla has fled to London. With Serum Institutes’s global supplies on hold, uncertainty looms for 92 low-income and lower-middle-income countries that were depending on COVAX. Even if they find new suppliers, it will be months before the vaccines materialize. Serum Institutes’s cop-out means COVAX will be short of 190 million doses by the end of June, while nearly a dozen countries, many of them in Africa, have yet to get a single dose.

In India’s immediate neighborhood, Bangladesh, Nepal and Sri Lanka are running dangerously low on vaccines. Nepal is facing a double whammy of disastrous infection rates and depleting vaccine stocks. From just 152 cases on April 1, it’s now clocking more than 8,000 cases a day, straining its feeble healthcare infrastructure. It had bought 2 million doses from Serum Institute, But the company stopped supplies after delivering the first 1 million doses as demand in India rose. It’s the same story for many other countries.

READ MORE: The COVID-19 Pandemic May Be the Hardest Mountain Nepal’s Sherpas Have Ever Had to Climb

Insufficient orders from India lay at the heart of Serum Institute’s troubles—and those of the world. Up until late March, the government wouldn’t let anyone forget that India had supplied more vaccines globally than it had vaccinated its own people. It framed this as an act of national greatness—when it was in reality murderous miserliness on part of the world’s sixth-largest economy.

Serum Institute was the world’s most prolific vaccine maker even before the pandemic. Poonawalla relied on his own funds, along with international donors and deals with other countries to meet the pandemic challenge. Neither did the Indian government inject funds early on to help him ramp up capacity, nor did it place bulk orders for vaccines. By the time India’s first phase of vaccination rolled out on Jan. 16, the Indian government had bought just 11 million doses from Serum Institute and 5.5 million from Bharat Biotech, the maker of an indigenously developed vaccine. At the end of February, the government placed another order of 21 million doses with Serum Institute, with no indication if it would buy more; then ordered another 110 million doses in March when infections started to rise. Minuscule amounts, given India’s population of 1.4 billion.

In comparison, by November 2020, the U.S. and E.U. had each pre-ordered 700 million doses of various vaccines, much more than they needed. Rich countries have been criticized for this vaccine inequity—wherein they have cornered the bulk of the global output while others have none. Canada has ordered enough to vaccinate its population five times over; the U.K., 3.6 times; the European Union, 2.7; and the U.S., twice over. The U.S. this week reached the milestone of fully vaccinating half its adult population, while Chad hasn’t been able to administer a single dose.

READ MORE: The Most Important Thing Rich Countries Can Do to Help India Fight COVID-19

It is this global vaccine inequity that COVAX was designed to prevent, and Serum Institute was at the center of this enterprise. It was given the license to make the Oxford-AstraZeneca vaccine on the condition that it would supply poor countries. The Indian government’s deliberate go-slow in vaccine procurement, which has magnified the impact of its own second wave, has diminished hopes for vaccine justice for others.

Vaccine injustice hasn’t spared India, either, thanks again to the Modi government’s baffling policy choices. Ditching the global norm of central procurement and free universal vaccination, it has made states responsible for procuring some vaccines on their own. The market has also been opened up to foreign vaccine makers, hitherto barred, who can now sell their wares at all sorts of prices to state governments, corporations and individuals. While the central government and some states are administering vaccines for free at public hospitals, Indians must pay for the shot at private hospitals—and the cost is increasing.

That makes India one of the only countries where life-saving vaccines are not only being sold, but sold at varying rates on the open market. States are struggling to procure vaccines on their own, and with multiple buyers competing in desperation, vaccine makers are calling the shots in a seller’s market. Deepening the vaccine inequity, India is also conducting the vaccination of the 18-44 age group through an app, having somehow convinced itself that all Indians are literate, tech-savvy and in possession of smartphones—thus privileging those who are on the right side of the digital divide.

By reneging on the obligation to export vaccines, India has helped reproduce its domestic gulf between vaccine haves and have-nots on a global scale. Modi first put the lives of his own people at risk by not putting money where his mouth was. Then, when it all went horribly wrong, he forced Indian companies to break their word on vaccine deliveries, endangering millions of others the world over by depriving them of vaccines. No amount of disingenuous fluff on “global good” now will hide that fact. 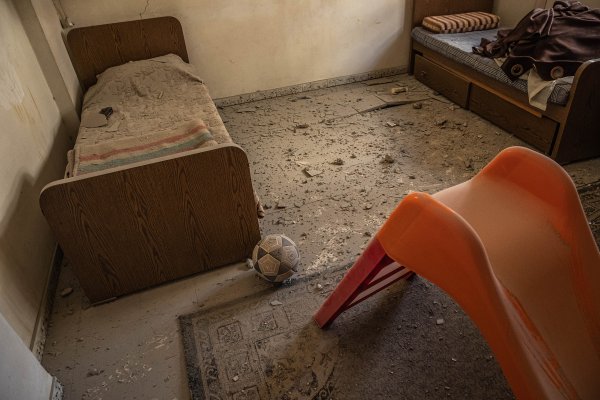 I Fled Gaza But My Family Remains. Will the U.S. Step Up and Help Them?
Next Up: Editor's Pick