Sometimes you’re glad when even a not-so-great movie exists. Plan B, a teenage buddy comedy available on Hulu, isn’t wholly terrible, though much of its forced raunchiness falls flat, and too many of its gags feel corny and tired. But a movie that strives for something is often better than one that fails to try for anything at all. Despite its flaws, Plan B—directed by Natalie Morales and written by Joshua Levy and Prathiksha Srinivasan—feels modern and breezy and free, maybe partly because of its two appealing lead performers, but also because of its specific setting: a midwestern town that isn’t depicted as all-white and totally backwards, the way the Midwest is so often written off in cheap movie shorthand. For all the ways in which Plan B is sometimes thunderously obvious, there’s still a lot going on beneath the surface.

Sunny (Kuhoo Verma) and Lupe (Victoria Moroles), young women growing up in small-town South Dakota, represent the kind of best-friend pairing that almost makes more sense in real life than it does in the movies. Sunny is an A-student whose mother loves her but clearly expects a lot from her, as if inadvertently passing along whatever stress she herself might have felt growing up in an Indian family. (The absence of a father in the household is never explained, a relief in a modern landscape where single-parent families are still somehow treated as an anomaly.) Lupe is a bit of a wild thing, showing up to the breakfast table in her riot grrrl gear and blackish-red lipstick, much to the dismay of her father, a pastor (Jacob Vargas). Sunny barely puts a foot wrong; Lupe is yearning to break free. But they’re still just kids trying to figure everything out, a support system for each other in the sometimes-hostile teenage universe.

Jolly Abraham and Kuhoo Verma in 'Plan B'
HULU—2021 Hulu

Lupe appears to have had more sexual experience than Sunny, who’s eager to get started but has no idea how that’s going to happen: she’s thought of as the “smart” girl at school, and her sheltered family framework doesn’t leave much room for experimentation. Still, she has her eye on a handsome and sweetly nerdy guy at school, Hunter (Michael Provost). Lupe, hoping she can get these two together, organizes an impromptu house party at Sunny’s house while her mother is away at a conference. The two brew up a vat of killer punch (the ingredients include cough syrup and pickle juice) and wait for the amorous adventures to happen.

Nothing, of course, goes as planned. Lupe invites her crush to the party, who never shows up. And when it looks as if any kind of romance with Hunter is impossible, Sunny, against her better judgment but with full consent, ends up having awkward and highly unromantic bathroom sex with the school’s most devout and annoying Christian, Kyle (Mason Cook), who ends up being much more freaked out by this act than Sunny is. “I’m sorry, I have to go pray!” he announces as he runs out on her, while Sunny rolls her eyes, annoyed at herself for even allowing this whatever-it-was to happen.

But there’s a danger Sunny could be pregnant, and Lupe is ready with a solution: they’ll get Sunny a dose of the morning-after pill. The local pharmacist (played by Jay Chandrasekhar) happens to be Indian. He prattles on about how much Sunny reminds him of his adored daughter—and then, because she’s underage, refuses on moral grounds to give her the pill she needs. Sunny and Lupe have no choice but to borrow Sunny’s mother’s car and head for the nearest Planned Parenthood, which is hours away.

Their trek turns into a shaggy-dog catalog of misadventures, bad judgment and bickering. Plan B has a few things in common with recent films like Rachel Lee Goldenberg’s Unpregnant (a comedy) and Eliza Hittman’s Never Rarely Sometimes Always (decidedly not a comedy), both about teenage girls seeking abortions and unable to get them in their home state. The stakes are a bit lower in this scenario, because Sunny’s pregnancy is only a possibility. But Plan B still gives you a sense of how traumatic an actual pregnancy would be for Sunny, who is barely past the point of just being a kid. One of her cruel classmates hisses behind her back, “She dresses like a huge American Girl doll,” and there’s some truth in it—Sunny has a kind of loping, corduroy-overall demeanor, though it’s clear she’s just one pushup-bra away from being a bombshell. Similarly, Lupe seems to have it all figured out—but she too is navigating an uncertain path, one she’s not sure her closest friend, let alone her father, will accept.

This is one of Natalie Morales’ first films as a director (she has worked mostly as an actor), and she can’t always finesse the script’s cartoony crudeness masquerading as sexual frankness. But she still strikes the right tone overall. Plan B never condescends to Sunny and Lupe or the things they care about, but it also gives us permission to laugh about the things they don’t know. (I mean, how are you supposed to approach a pierced penis?) At the same time, it’s clear-eyed about their restrictive surroundings. Even the little yellow bus that picks them up for school, tootling past neat clapboard suburban houses as well as farmland, seems somehow dispiriting, a symbol of a home-towny way of life that means them no harm even as it hems them in. Plan B is about craving parental approval but also needing to break away, and about the uncertainty of living in a place where you may not be allowed to be yourself. It’s also about that point where you just have to take charge of your own destiny—and hope that your town, your state, or your country isn’t standing in your way. 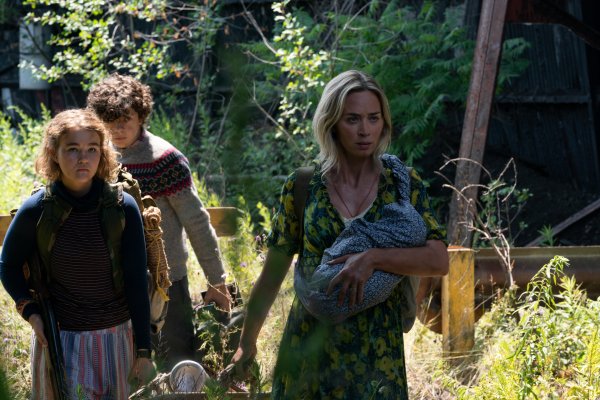 A Quiet Place Part II Is a Little Too Tense
Next Up: Editor's Pick