Around this time a year ago, then-President Donald Trump and his administration started to pivot away from their early defense of China’s handling of the coronavirus pandemic. They abandoned their chase of an election-year trade deal and adopted a more critical posture that laid blame for the fast-spreading virus on Beijing. Deploying patently anti-Asian rhetoric, Trump and his team started a systemic—and roundly condemned—campaign in April suggesting that the virus leaked from a laboratory in Wuhan, the city in which it was first identified. Trump routinely referred to COVID-19 as “the China virus,” “the Wuhan virus” and even “Kung Flu.”

Most mainstream voices in the press and in labs ignored Trump’s rhetoric, rightly predicting it would spark a wave of anti-Asian hate crimes. The majority of scientists said at the time—and maintain to this day—the most likely explanation was zoonotic transfer, with the first human infection likely due to the exposure to the virus at a seafood market in Wuhan. On April 30, the same day that Trump invoked the Wuhan theory, the U.S. Office of the Director of National Intelligence released a statement debunking Trump’s assertion. That wasn’t so surprising; after all, just seven days before floating the idea, Trump had suggested injecting bleach might help fight COVID-19.

Now Washington is scrambling to re-examine the origins of the virus, after the Wall Street Journal reported on intelligence indicating Chinese researchers at the Wuhan lab were hospitalized, for symptoms similar to those of COVID-19, in November 2019—weeks before anyone knew a coronavirus was spreading. Biden today released an unusual statement revealing he has ordered a review among intelligence agencies about the source of the pandemic. Yesterday, Health and Human Services Secretary Xavier Becerra called for a fresh investigation into the virus’ origins, saying the probe must be swift and independent, setting up a distinction from a February study by the WHO and China that concluded a lab jailbreak was not the source.

He joins prominent scientists who are similarly expressing skepticism about the early conclusions and urging further study. When Trump’s former CDC chief speculated in March that the virus may have “escaped” from a Chinese lab, he was almost universally shrugged off as a Trumpian kook. In reality, the concerns he raised might be worth real consideration.

As early as January of 2020, months before Trump got onboard in a public way, conservative voices were suggesting that Wuhan’s top-tier research laboratory was at the center of the outbreak, and not the seafood market. Sen. Tom Cotton, a loud and proud critic of China and its government, likened the alleged Chinese coverup to the 1986 nuclear meltdown at Chernobyl. A Washington Post headline in February 2020 telegraphed just how unseriously Cotton’s push was being treated: “Tom Cotton Keeps Repeating a Coronavirus Conspiracy Theory That Was Already Debunked.”

Meanwhile, the same month, Chinese researchers posted online a preprint paper funded by the National Natural Science Foundation of China, suggesting that “the killer coronavirus probably originated from a laboratory in Wuhan.” The paper was withdrawn a few weeks later before it could be peer-reviewed. In March 2020, the U.S. Defense Intelligence Agency—the Pentagon’s spy arm—updated its findings to include the possibility of a lab error. When asked weeks later on April 30 why he was suggesting had suddenly suggested that day that the Wuhan lab was the source, Trump, uncharacteristically, kept mum: “I can’t tell you that. I’m not allowed to tell you that.”

Trump was widely criticized for his xenophobic language and what many critics assumed was another example of his irresponsible deployment of non-facts. The President was far afield from what trusted experts were saying at the time and, by that point in what would be his presidency’s final year, had blown most of his credibility outside the bubble of his ardent fans. When given the benefit of the doubt, Trump usually confirmed that he didn’t deserve it.

At times of national crisis, Americans turn to their leaders for information, comfort and encouragement. But only if that leader is a credible voice. Then-President George W. Bush had barely been on the job eight months when al-Qaeda terrorists carried out the Sept. 11, 2001, terrorist attacks. He had come to power after a contentious 37-day recount in Florida but on that Tuesday, even Bush’s sharpest critics sheathed their contempt. His job approval spiked instantly from 55% to 87%—a record in Gallup’s polling matched only by Harry Truman immediately after Germany surrendered in 1945 and George H.W. Bush after pushing Iraqi forces from Kuwait during the first Gulf War. Trump’s approval rating never topped 50% in any Gallup survey.

The most telling slice of that “honest and trustworthy” metric is Trump’s decline among fellow Republicans. At the start of his presidency, 81% of Republicans described Trump that way. By June of 2020, the figure had fallen nine percentage points. The fact that a staggering 3-in-10 Republicans didn’t see him as an honest conveyor of fact speaks volumes to just how little credibility Trump had. (It will shock no one that 91% of Democrats said they did not see Trump as an “honest and trustworthy” figure.)

Seldom has the nation seen such a profound and self-inflicted trust deficit in its leader. Trump may have been telling us things that we now know could be true. He may have been able to save his re-election bid had he prosecuted the evidence that is now emerging in a way that resonated with independents and even a few Democrats in the Midwest who still harbor deep animosity toward China for the collapse of the industrial core. He may even have rallied the world to step up pressure on the WHO and China to open its doors in a meaningful way for inspectors.

Instead, Trump had squandered that pulpit by the time he reached his final year in power by embracing all manner of nonsense. He started 2020 on trial for deputizing foreign leaders to dig up dirt on his rival’s family and ended it claiming his victory was stolen. Trump didn’t tell the truth about either—and a whole lot more, to be honest—and is now banned from social media.

But he is not gone, as evidenced by a stream of statements sent from his office in recent days. ”Now everybody is agreeing that I was right when I very early on called Wuhan as the source of COVID-19, sometimes referred to as the China Virus. To me it was obvious from the beginning but I was badly criticized, as usual,” Trump said in a statement yesterday.

The statement was preceded by one promoting the incorrect view among 53% of Americans that Trump is the rightful President, and followed by another claiming 2020 was “the most corrupt Election in the history of our Country.” It follows months of incoherent responses and irrational denialism from a man who claimed the pandemic would just go away and yet had to be airlifted to Walter Reed while infected himself. And we wonder why Americans dismissed Trump when he asserted that a lab accident in China may have been to blame. It’s possible to be correct and untrustworthy at the same time. 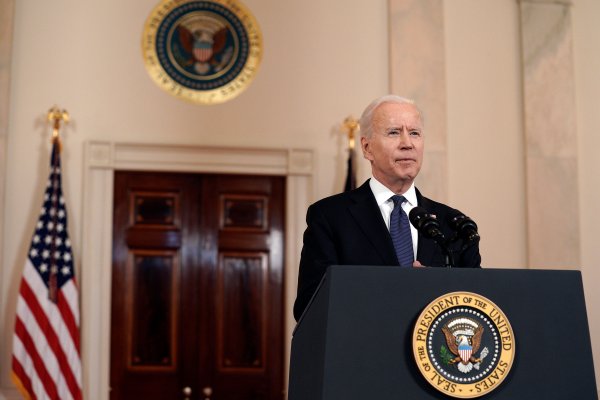 On Anniversary of George Floyd’s Death, Biden Misses a Deadline
Next Up: Editor's Pick