Palestinian farmer Atta Jaber carries a giant turnip that he harvested from his land across from the israeli settlement of Kiryat Arba, in the West Bank town of Hebron, on January 23, 2021.
Hazem Bader – AFP/Getty Images
By Ciara Nugent

On May 21, Israel and Palestinian militant group Hamas entered a ceasefire. The agreement ended 11 days of conflict—the most frenetic fighting between the two sides since 2014—during which the death toll in Gaza has been at least 253 and in Israel has been at least 13. But a return to the fragile status quo won’t solve the myriad problems facing Palestinians, including severe climate threats.

Like Israel and the rest of the Middle East, Gaza and the West Bank are experiencing increasingly long and more frequent periods of extreme heat. Parts of the region are set to warm at twice the global average rate by 2050, according to scientists at Germany’s Max Planck Institute.

Palestinians’ most urgent climate problem, though, is water scarcity. And it is deeply intertwined with the political situation. In Gaza, more than 2 million people live in a 141-square-mile strip of coastal land, inside borders set by its conflicts with Israel. The excessive pumping of water from under the ground to provide for that population, combined with wastewater contamination, has left 97% of water in Gaza’s coastal aquifer—its only freshwater source—unfit for human consumption.

In the West Bank, water is more abundant: more rain falls each year on its northwestern region than on London. But the terms of 1995 peace accords, which gave Israel a say on water projects in the West Bank, have severely limited what Palestinians can do to access water. Permits for pumps and wells are rarely granted and infrastructure is often destroyed by the Israeli army, according to Amnesty International, resulting in what the organization calls “truly staggering” disparity in water access between Palestinians and Israelis. Hundreds of Palestinian communities lack running water.

Climate change will make things worse. Even a moderate amount of sea level rise in the Mediterranean will allow more saltwater to enter Gaza’s aquifer. And the collection of rainwater—which many in the West Bank rely on to survive—will get harder as average annual rainfall is expected to decrease, with dry periods becoming longer. (In Gaza, the World Bank claims rainfall has already decreased “20–30%” over the past five years.)

Palestinians are, by necessity, adapting to environmental challenges they already face. Farmers are planting resilient crops that can survive with little water, for example. The Palestinian Authority—which governs in parts of the West Bank—produced a new climate adaptation plan in 2016 as part of its participation in the U.N.’s Paris climate change agreement, envisioning new infrastructure to protect areas from flooding and the construction of a large-scale desalination plant. But so far, action has moved slowly, with major projects mired in delays over institutional issues and funding approval.

International efforts to help Palestinians prepare for climate change are complicated, says Mark Zeitoun, a professor of water security and policy at the U.K.’s University of East Anglia, who worked on a UN-backed climate adaptation plan in 2009. The plan was published just months after a Israel-Hamas war in Gaza had killed almost 1,400 Palestinians, and some criticized the project as normalizing the occupation and distracting from Palestinians’ most pressing problems, which are political, not environmental. “For us to go and explore the dimensions of climate change, it takes away from the real issues and therefore it’s doing a disservice to all the people who are suffering,” Zeitoun says. “Most people in the West Bank and Gaza cannot think about what will happen to their great grandchildren when they have to worry about the survival of their own children beyond the age of 5.”

Nada Majdalani, Palestinian director at EcoPeace, an NGO made up of Jordanian, Palestinian, and Israeli environmentalists, says that under the occupation and the blockade of Gaza—and bouts of violence like the one that just ended—it’s impossible to deliver water and climate security for Palestinians. “Waking up from a horrific situation in Gaza, we now have to deal with an estimated $22 million of damage to the water and sanitation infrastructure. Tens of kilometers of the network were damaged,” she told me over Zoom from Ramallah on Monday. Amid poverty, downed power lines and crumbling buildings, international donors tend to see long-term climate action as “a luxury,” Majdalani adds. “But we can’t just hold up our hands and wait for the miracle to happen on the political side [before addressing climate problems.]”

Palestinian children fill up containers with water in Gaza City on May 20, 2021 during the conflict between Israel and Hamas.
Majdi Fathi–NurPhoto/Getty Images

As well as threatening a humanitarian disaster, deferring climate action in Gaza and the West Bank goes against Israel’s interests. Security analysts have long warned that increasing water stress could destabilize the region. Already, water inequality between Palestinians and Israelis adds to the tensions that frequently spark into violence. The Israeli government, which has developed sophisticated systems for desalination, waste reduction and transport to provide drinkable water, has installed reliable water systems for Israeli settlers in the West Bank and for farmers on the Israeli side of the Gaza border. Climate change will widen the gap between the two sides, since Israel’s infrastructure and economy are better placed to adapt to climate threats.

EcoPeace wants Israeli and Palestinian leaders to see the threat of climate change as an opportunity to advance peace. They have proposed a “Green Blue Deal,” which would use COVID-19 recovery efforts to create trading relationships around renewable energy and water infrastructure between Israel, Palestine and Jordan, in order to “address conflict drivers, advance a two state solution based on 1967 borders, and promote trust-building and cooperation in a conflict-mired region.” Last summer, the Israeli energy minister and the Palestinian Authority both expressed interest in working on elements of the proposed project with Jordan’s government.

There are many barriers to Israeli-Palestinian co-operation here, including, as EcoPeace recognizes, “concerns of dependency on another state and concern that radical elements might seek to damage cross-border infrastructure.” The rising influence of far-right politicians in Israel, who reject the creation of a Palestinian state, reduces the plan’s chances of success.

But the insight at its heart is a crucial one for all governments seeking to chart a safe path through the climate crisis for their citizens. “For Israel to impede development of the water and sanitation sectors in the West Bank and Gaza is to create a ticking time bomb for its own interests,” Majdalani says. “They need to recognize that climate security cannot be dealt with by one side without consideration of what happens on the other side.” 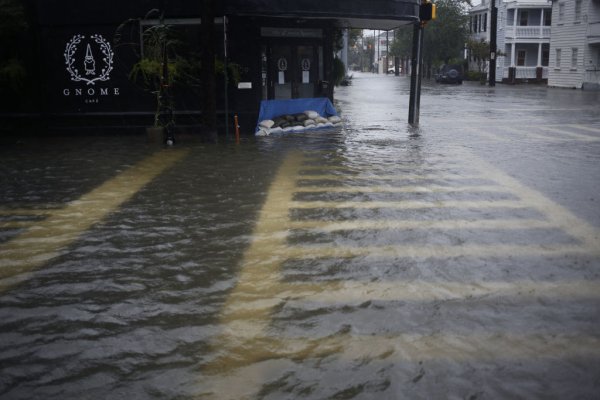 Infrastructure Is Important to Reduce Climate Risk. But It's Not Enough
Next Up: Editor's Pick