The United States has faced a racial reckoning in the 365 days since former Minneapolis Police Officer Derek Chauvin murdered George Floyd, an unarmed Black man, by kneeling on his neck for nine minutes and 29 seconds.

Millions of Americans have marched in dozens of cities protesting police brutality. Thousands of employers have attempted to grapple with workplace inequality. Black voters showed up to the November polls in droves—especially in pivotal electoral states like Georgia, Michigan, and Pennsylvania—helping Joe Biden win the White House.

But for all the nation’s progress in the fight for racial justice, plenty remains unchanged. Police have killed roughly three people per day in 2021, mirroring the pace of at least the eight years prior, according to research group Mapping Police Violence. Black people have constituted 21% of those deaths, despite making up just 13% of the U.S. population. Meanwhile, cops in many cities can continue to obtain no-knock warrants for nonviolent drug cases and use chokeholds—which resulted in the deaths of both Floyd and Eric Garner in 2014—largely at their discretion. There is still no national police misconduct database. And a legal provision called qualified immunity makes it exceptionally difficult for families of individuals killed by police to seek civil relief.

Congress has so far been unable to pass legislation that would meaningfully address these problems. The Democrat-led House has twice passed the George Floyd Justice in Policing Act, but both times it got held up in the Senate. Last year, Senate Republicans offered a narrower slice of police reform legislation that Democrats blocked, alleging it lacked substance. Now, a bipartisan trio made up of Democratic Sen. Cory Booker, Republican Senator Tim Scott, and Democratic Representative Karen Bass are working toward consensus on police reform legislation that could garner the 60 votes necessary to pass in an evenly divided Senate. Biden gave them a deadline to pass police reform by the one-year anniversary of George Floyd’s death.

They missed the deadline. But Rep. Bass, the former chair of the Congressional Black Caucus and author of the Justice in Policing Act, and NAACP President Derrick Johnson, a longtime racial justice advocate who has been in conversations with lawmakers about the legislation, spoke to TIME on the anniversary of Floyd’s death about why they think the deadline is less important than the contents of the bill, and what they hope to see in the final text.

TIME: How close do you feel you are to striking a deal on police reform legislation with Republicans?

BASS: The talks are moving forward. I’m very hopeful that we will be able to get a bill on President Biden’s desk soon. Senator Scott has said he sees a light at the end of the tunnel. And I agree with him on that.

TIME: Does that mean weeks away? Months?

BASS: It would have been wonderful to have met the timeline of today, which President Biden said in his first speech to Congress. But I think what is far more important than a day and a date is a substantive bill. And that’s what we’re committed to. I do not think we are months away.

TIME: Among the list of Black and brown Americans who have lost their lives at the hands of police since Floyd’s death are 13-year-old Adam Toledo, a Latino who had his hands up when a Chicago police officer shot and killed him, and 20-year-old Daunte Wright, who died in the suburbs of Minneapolis after a cop says she mistakenly deployed her gun instead of her taser on him during a routine traffic stop. Meanwhile, as you are well aware, Congresswoman, thousands of mostly white Americans illegally stormed the Capitol on January 6. Just one of those rioters was shot by police officers. How do those inconsistencies in the use of force feel to each of you?

JOHNSON: It is something that African Americans have talked about for decades—we’ve known of the two Americas. But this is our opportunity to create one America. After the incident a year ago, we’ve seen something we’ve never seen before: individuals took to the streets focusing on the value proposition that Black lives matter. [Those people marching were] Black, white, young, old, male, female—that’s important. It is an inflection point that we are more aware now than we’ve ever been. Here’s our opportunity for Congress, for this Administration, actually to do the right thing and move reform forward, so we can create one America and not have this dual system that many of us had to grow up in.

BASS: It was no surprise. I don’t think I could think of an African American that would be surprised by the difference in treatment. I know I was extremely angry that day, being here, knowing that if there were 1,000 African Americans and Latinos who stormed the Capitol, the Capitol would have been dripping in blood. And the idea that the [rioters] came in assaulting police officers with “blue lives matter” flags… I wouldn’t have expected otherwise. But it was still very shocking to see.

TIME: Congresswoman, CNN reported that you met with the Floyd family this morning. Are you able to say how that conversation went and whether the Floyd family was frustrated that Congress didn’t meet the May 25, 2021 deadline that Biden imposed?

BASS: The meeting was positive—positive in the sense that we were there to commemorate the tragic loss of a family member and that they were there to offer us encouragement. There was absolutely no negativity in terms of meeting a deadline. They are far more concerned about substance than they are a date.

Philonise Floyd, the brother of George Floyd, speaks as he and members of the Floyd family meet with House Speaker Nancy Pelosi and Rep. Karen Bass in the Rayburn Room of the Capitol in Washington, on May 25, 2021.
Greg Nash—Pool/AFP/Getty Images

TIME: My colleague Josiah Bates recently wrote about how various cities across the country are experimenting with police funds after “defund the police” became a national rallying cry. Examples include Denver, Colorado sending health professionals instead of police officers to mental health crises; Austin, Texas diverting police funds to purchase a hotel to help house homeless individuals; and the Los Angeles school board voting to eliminate 1/3 of the city’s school police officers and divert police funds toward the education of Black students. How do you define “defund the police” and how do you feel about the approaches these cities are taking?

JOHNSON: First of all, it’s a distraction. We need to focus on police reform. Our communities want to be protected and served. I have law enforcement in my family. It is important to have individuals who care about the community serve the community, and we don’t want to get lost in semantics. But more importantly, “defund” as I understand it, is about right-sizing to ensure that in communities living in trauma, you have social workers in place, that households [experiencing] trauma [have] places they can go, that people who have mental challenges have access to properly funded mental health professionals to address those challenges. We’re asking police officers to do way more than they’ve been trained to do, and then not pay them their due. We should right-size our budgets so people can have a healthy community and not get distracted by the buzzwords or buzz phrases.

BASS: We have used police to address social health and economic problems. Why? Because we decimated the social safety net. So I say ‘refund’ the communities, because we have divested from communities over the years. It is a shame that in our country, the way we’ve decided to address mental illness is to incarcerate people. And then, in many cases, people wind up being executed. Why on earth would we allow this to happen? So the idea of addressing a health problem like mental illness by bringing in the police—we need to bring in social workers, we need to look at what it takes to make a community safe. And instead of just investing in one side, we need to have a holistic approach.

TIME: 16-year-old Ma’Khia Bryant was in an Ohio foster home because of a temporary housing issue with her immediate family when an altercation at the foster home resulted in a police officer shooting and killing her. Do you think better funding in community services could have changed what happened that day?

BASS: Foster care is an issue that I have worked on for many, many years. That’s actually the feeder system into the justice system. That was a classic situation that happens at a group home. What typically happens is that there’s a fight in a group home and police are called. And that was a home that was problematic. And so once again, you have a failure of society, and then a child winds up being killed… It’s a common situation in the nation’s child welfare system. Instead of supporting the family that’s in crisis, we break them up, take the children away, and that’s supposed to help the situation.

TIME: Let’s imagine for a moment that you are able to meet a consensus on the Justice in Policing Act and pass police reform within the next few weeks. Obviously, that is not going to solve racial bias in all of policing or in society. What do you do next?

BASS: The minute President Biden signs this bill, we can take a half day off and go back to work, because so much more needs to be done. So it’s important that we do this. But this is not the end-all, at all. Why do you have a profession that has the ability to take away your freedom and take away your life, but doesn’t think it’s supposed to be accountable to anybody? No transparency, no accountability, just, “Leave us alone. Let us do it the way we do it.” There’s no profession like that. There are 18,000 police departments and 18,000 methods of policing.

Derrick Johnson, the president of the NAACP, center, visits the "Say Their Names" memorial in Minneapolis on April 19, 2021.
Trevor Hughes—USA Today/Reuters

TIME: House Majority Whip James Clyburn recently said that he didn’t want to “sacrifice good on the altar of perfect,” meaning it was his view that Democrats should consider moving forward with a police reform bill that doesn’t immediately address qualified immunity, which has been a major sticking point with Republicans. How do your views on qualified immunity compare?

JOHNSON: We believe it is absolutely essential that qualified immunity reform is in this bill. It is the way to hold law enforcement officers accountable for misconduct.

JOHNSON: Those are options we’ll have to take a look at. The substance of the bill [and the] detail is what we’re going to look to. How do we get to accountability? We’re open [to different solutions], as long as individuals are being held accountable when they commit acts against individuals and communities.

TIME: So qualified immunity is a deal breaker for you?

JOHNSON: Qualified immunity reform must be in this bill. It’s absolutely essential.

The original version of this story misstated Rep. Karen Bass’ position. She was chair of the Congressional Black Caucus between 2019-20; she is no longer chair. 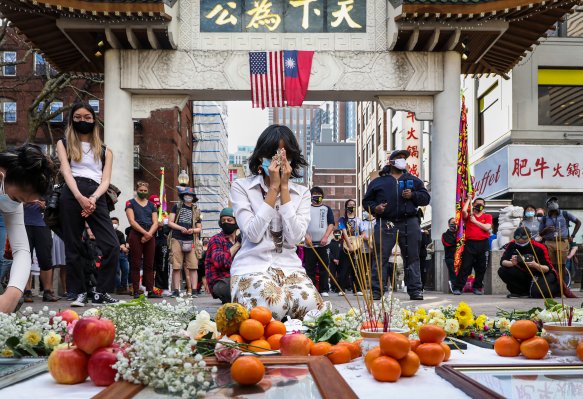 New Fears After Another Anti-Asian Attack
Next Up: Editor's Pick