Racist Slurs, Broken Glass, Then a Return to Business for an Asian-Owned Store Attacked Twice. ‘We Have No Choice.’

Mun Sung and his wife watched helplessly on March 30 as a man wielding a metal pole smashed through glass, ripped down racks and hurled racial slurs at them inside the Charlotte, N.C. convenience store they’ve owned for two decades.

They knew from following the news that Asian Americans were increasingly being targeted and attacked across the nation. But despite facing racism at work on a daily basis since the pandemic began—even growing hardened to the hatred month after month—Sung could not imagine his family would fall victim to violence.

On Tuesday, less than two months later, it happened again.

After a male customer grew irate that he could not afford a pack of cigarettes, he repeatedly slammed a sheet of plexiglass with his fists until it shattered, shouting racial slurs as he pummeled the protective barrier, according to Mark Sung, who helps his parents run the store and who shared video of the attack with TIME.

Sung says his 63-year-old mother, Joyce, was hit by pieces of plexiglass, which sent her stumbling back. She sustained a bruise on her forehead and a cut on her finger. “It hurts every time I blink my eye,” she says. “I was shocked at first, but I’m fine now.”

The second attack on the Sung family is the latest example of the fear Asian Americans live with each day, in a world where they cannot count on bystanders to help. Just like in New York City, where security guards at a nearby building shut the doors on a 65-year-old Asian American woman who was attacked on March 29, nobody came to Joyce Sung’s aid or indicated they were calling for help.

The surveillance video obtained by TIME shows one customer walking away as the man becomes increasingly violent. The Charlotte-Mecklenburg Police Department directed comment to G4S, the company that is responsible for daily security operations at the transit hub where the store is located. G4S did not respond to requests for comment.

Mark Sung says he doesn’t blame customers for not intervening, citing the dangers and likelihood that an attacker could have a weapon. Instead, the family has learned to prepare for the possibility of confrontations and has a routine for when things escalate: call the police, assess the damage, file an insurance claim, go back to work.

“Knowing that we’re going to get cursed out every day while we’re getting ready for work is just… we don’t know what words to use,” Joyce Sung says.

The latest confrontation at the Plaza Sundries store erupted at around 11 a.m., when the man first tried paying for cigarettes with 50 cents and then $1. Mark Sung says he turned violent when his mother returned his change.

Surveillance video, which has no audio, shows the man putting down what appears to be a Bible that he entered the store with before whaling on the plexiglass above the cash register with his fists. The man can be seen using both hands to shove the quarter-inch thick protective shield, bending it until it shatters.

Authorities arrested a suspect in the March 30 attack, which was also captured on surveillance video. Mark Sung said someone had also been detained in Tuesday’s attack, but there was no confirmation of that from police or the security company.

There have been more than 6,600 reported hate incidents against Asian Americans from March 2020 to March 2021, according to Stop AAPI Hate, a reporting database created at the beginning of the pandemic. Anti-Asian hate crimes in 16 of America’s largest cities increased 149% in 2020, according to an analysis of official preliminary police data by the Center for the Study of Hate & Extremism at California State University, San Bernardino.

Despite the latest attack, Mark Sung says they couldn’t afford to shut down the store for the rest of the day, especially on a popular day for Lottery purchases and after the pandemic drove sales down at the store about 45%.

“Closing would set us back so far,” he says, adding that damages and lost revenue from the March incident cost the family roughly $25,000.

Within two hours, after alerting the authorities, the family erected a new sheet of plexiglass and went back to work. 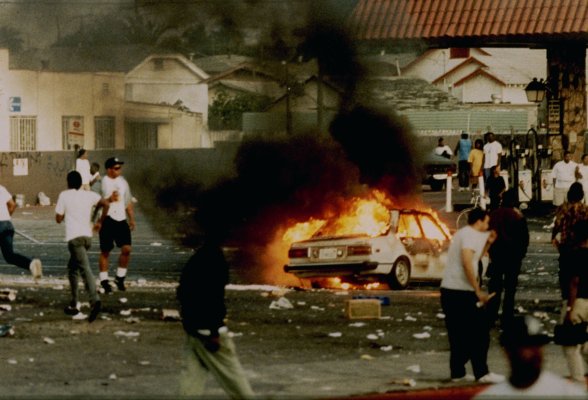 We Misunderstand What Happened After LA Exploded in 1992
Next Up: Editor's Pick