President Joe Biden had two dates circled on his calendar this week: today, the one-year anniversary of George Floyd’s murder, and Memorial Day, which arrives on Monday. Both are deadlines that Biden himself set for action for a policing overhaul and reaching a deal on infrastructure, respectively, and both are going to sail by without much action.

During his first address to a joint session of Congress last month, Biden said he wanted to have made progress on police reform by the Floyd anniversary. Instead, he’s meeting privately today with the Floyd family, who earlier in the day met with House Speaker Nancy Pelosi at the Capitol. And the push for a bipartisan deal on infrastructure seems now heading into the summer, the deadline to show signs of progress unofficially pushed back to the August recess.

This is the problem with Washington: you can set all the arbitrary deadlines and benchmarks you want. But then you have to deliver. When you do, you get little credit for reaching them. Biden, for instance, got almost no fanfare for meeting his goal of vaccines by his 100-day mark. When you miss them, it’s all anyone cares about.

The twin high-profile chases for Biden are proving tougher than his team initially thought. Biden made policing a central focus on his campaign, especially as he sought to reassure Black voters that he understood their concerns. During 2020, when Black Lives Matter evolved from a slogan to a movement, Biden worked overtime to win the trust of Black voters. It made for a sometimes awkward courtship, but Black voters pushed Biden to the White House, having carried 87% of Black voters — a slight drop-off from Hillary Clinton’s showing four years earlier. Biden’s promise to reform policing not only won him Black support but that of progressives and younger voters, who stood as allies to Black neighbors in demanding change that was broadly popular: a Vox poll this April found 84% support for mandating body cameras, 71% support for both banning chokeholds and blocking racial profiling and 59% support for limiting police officers’ legal protections.

As President, Biden is struggling to deliver on those promises. The Democratic-led House has cleared a bill named for Floyd but there are not, to this point, 10 Republican Senators who will go along in the Senate. An intransigent Congress seems determined to block Biden wherever it can, and the top Republican negotiator on a bipartisan team negotiating a policing bill, Sen. Tim Scott of South Carolina, doesn’t seem able to coax his colleagues to a yes.

The same appears to be true on infrastructure. Polling shows government investment in bridges, tunnels and even high-speed Internet are popular. But Republicans are balking at the price tag — or handing Biden a win. The Republicans’ alternative offer to Biden’s own plan far below the $2 trillion that Biden initially sought. After Biden went down in his ask to $1.7 trillion, Republicans still said no. It sets up a situation where it’s not a stretch to say these talks are far from good-faith and that the GOP might never get to yes, no matter what Biden offers.

Beyond these deadlines, Biden faces uphill climbs on securing support for a proposed commission to study the Jan. 6 insurrection at the Capitol. He’s still chasing a voting-rights bill, a plan to combat the rising influences of China and Iran and an extension of jobless benefits. Oh, and nation’s credit card is due to hit its max this summer, requiring Congress to ask for a hike. Absent a fix there, the United States would default — and send the global economy into a spiral.

All of which is to say it’s tough to picture Biden smiling when he looks at the to-do list scrawled in the margins of his calendar this week. Republican lawmakers’ resistance is as much about Biden’s agenda as it is about casting the President as an ineffective leader heading into the 2022 elections. They need to make Biden’s arbitrary deadlines as painful as possible. But then again, it was Biden himself who set them. He walked right into the trap. 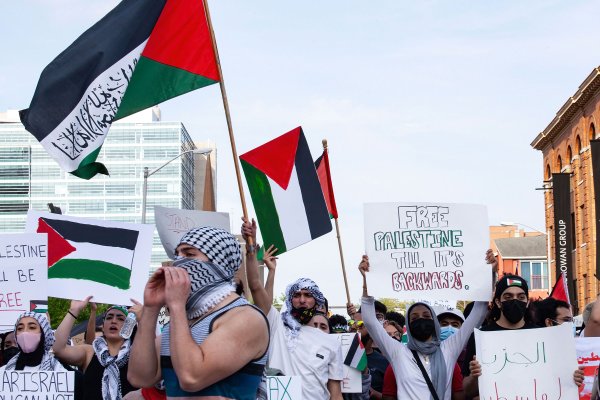 Calls for Justice in the U.S. Create a Dilemma for Pro-Israel Policies
Next Up: Editor's Pick