When exiled Belarus opposition leader Svetlana Tikhanovskaya took a Ryanair flight from Athens to Lithuania’s capital Vilnius, she wasn’t overly concerned about her safety. She couldn’t have predicted that just a week later her home country would scramble a fighter jet to force that same passenger flight to land and arrest a dissident journalist.

“We could not imagine that this regime would make such an act, to endanger the lives of hundreds of passengers, just to kidnap one person,” Tikhanovskaya told TIME, speaking from Vilnius on Monday. Of her own recent flight on that route, she said: “we never even thought about security. We were absolutely sure that we were safe.”

For those fighting to end the 27-year rule of President Alexander Lukashenko, who some call “Europe’s last dictator,” any sense of safety within the E.U. has vanished since Sunday’s nightmarish detour of the commercial airliner, which has triggered the bloc to announce stiffer sanctions against Belarus.

Ryanair, one of Europe’s most popular budget airlines, had almost reached its destination of Vilnius on Sunday night, when a Belarusian MiG-29 fighter jet sped towards it in mid-air, and ordered its pilots to divert to the country’s capital Minsk. Authorities told the pilots there was a security threat on board. Once the aircraft was on the ground at Minsk Airport, Belarus security agents forcibly dragged journalist Roman Protasevich, 26, and his girlfriend, law student Sofia Sapega, 23, off the plane to be detained in the country’s notorious jails. Three other passengers—believed to be from Belarus’s KGB intelligence service—also disembarked in Minsk.

While the incident was deeply shocking for Tikhanovskaya, she says it is the latest escalation in a pattern of behavior that has become all too familiar. “People are facing kidnapping from the streets every day,” she says. “Thousands of people are in jail. The situation in Belarus is deteriorating.”

She thinks Lukashenko has come to believe that he faces no serious consequences for his actions. “This event showed that the escalation is a result of impunity and the lack of attention,” she says. “Lukashenko thinks nobody can do anything, so he thinks, ‘I’ll do anything I want.’”

A Belarusian dog handler checks luggage after the Ryanair flight landed in Minsk on May 23.
ONLINER.BY/AFP/Getty Images

‘No one feels safe anymore’

Protasevich’s arrest is part of a sweeping crackdown on whatever non-government media is left in Belarus. Last week the country’s financial police raided the offices of Tut.BY, the biggest independent news service in Belarus, and opened an investigation into its operations.

As the cofounder of Nexta, a hugely popular news channel on the Telegram platform run by Belarus dissidents, Protasevich was a big target. The channel has posted hundreds of videos and photos detailing the crackdown on protesters and incidents of torture in prisons.

In December, Nexta’s other founder, Stsiapan Putsila, told TIME that hundreds of Belarusians were risking arrest by smuggling images to Nexta. “It is very dangerous for them to send this information,” said Putsila, who now lives in the Polish capital Warsaw. “But their will to share the information is more significant.”

The exiled opposition politicians are deeply on edge after Sunday night’s arrests. Several are now based in Vilnius, just a three-hour drive from Belarus. “I did not sleep last night because I was so nervous,” says Franak Viacorka, Tikhanovskaya’s senior advisor, by phone from Vilnius on Monday. “No one feels safe anymore. They will not stop.”

Despite three rounds of E.U. sanctions against Belarus, officials have previously stopped short of sweeping, tough measures against Lukashenko’s inner circle, in part because of divisions within Europe over how to deal with Belarus’s giant neighbor and ally, Russia. With Belarus on its knees economically, Russian President Vladimir Putin granted Lukashenko a $1.5-billion bailout last September, helping the authoritarian leader to hold on to power.

The crisis erupted last August, when Lukashenko declared himself the overwhelming winner of Belarus’s presidential elections, although many in Belarus believed Tikhanovskaya had easily won. Tikhanovskaya’s campaign had effectively created its own election fraud detection system, by having its voters snap photos of their completed ballots, thus proving her victory.

Tikhanovskaya, 38, a former English teacher, jumped into the race last May, after security police arrested her husband Sergei Tikhanovsky, thwarting his presidential run.

A political neophyte, Tikhanovskaya packed huge rallies, mobilizing thousands to march in protest, before fleeing last August across the border into Vilnius, where she now lives with her two children.

Her husband remains in jail in Minsk, leaving Tikhanovskaya to negotiate with world leaders and diplomats over tough sanctions against Lukashenko. She held talks on Monday with U.S. National Security Advisor Jake Sullivan and E.U. foreign affairs chief Josep Borrell, urging a strong international response to Sunday’s plane diversion. She told TIME she plans to travel to Washington “as soon as COVID restrictions are lifted,” she says.

Read more: How a Belarusian Teacher and Stay-at-Home Mom Came to Lead a National Revolt

Amid global furor over the incident, Ryanair came under pressure to explain why its pilots landed the plane in Minsk. In a muted initial statement posted on Twitter on Sunday, the company said the pilots “were notified by Belarus ATC [air traffic control] of a potential security threat on board and were instructed to divert to the nearest airport, Minsk.” It made no mention of the fact that Belarus security forces had seized two of its passengers. The company updated its statement on Monday, this time condemning Belarus’s action as “an act of aviation piracy,” while its CEO Michael O’Leary called the incident “state-sponsored hijacking.”

Lithuania’s government opened an investigation into Belarus on Monday and could possibly bring charges of plane hijacking, forced disappearance of a person and violating international aviation treaties.

Belarus became top of E.U. leaders’ agenda as they gathered in Brussels on Monday evening to commence a two-day summit. E.U. leaders demanded the immediate release of Protasevich and Sapega and agreed to economic sanctions, saying the bloc would expand the list of individuals and entities that would be targeted. They also imposed a ban on Belarusian airlines using E.U. airspace and airports and called on carriers based in the 27-nation bloc to avoid flying over Belarus.

Ramunas Stanionis, advisor to Lithuania’s former Prime Minister Andrius Kubilius, who heads the Belarus policy group in the E.U. Parliament, says some E.U. officials had become frustrated by the months of debate over what action to take against Lukashenko. Speaking to TIME by phone from Brussels before the sanctions were announced, he questioned why the E.U. had been slow to act, but speculated that the Ryanair incident could be a catalyst. “It is an act of state terrorism,” he said.

Earlier on Monday AirBaltic—an airline operated by the small E.U. nation of Latvia—said it would no longer fly to Belarus. And in Minsk, Belarus authorities held a Lufthansa plane on the tarmac for 90 minutes, claiming a terrorist threat, before finally releasing the Frankfurt-bound aircraft.

People hold paper airplanes during a protest in Warsaw on May 24 against the detention of Protasevich.
Omar Marques—Getty Images

In the shocked aftermath of the Ryanair incident on Monday, one crucial question remained: What might have happened, if the pilots had disobeyed the instructions on Sunday to divert their plane to Minsk?

Belarus experts and opposition figures believe the pilots had been told that if they failed to take the plane to Minsk, the Boeing 737-8AS aircraft would be shot out of the sky by the Russian-built fighter jet that had cornered it in the air.

That would have resulted in major loss of life, with 171 passengers on board. “They were ready to shoot down the Ryanair plane,” says Tikhanovskaya’s senior advisor Viacorka. “The goal was to forcibly land the plane,” he says.

Data from the website FlightRadar24 shows how the plane veered sharply off course just about two minutes—less than 20 miles—from entering the safety of E.U. airspace in Lithuania. The plane was far closer to its destination Vilnius than it was to Minsk, when it made a sudden turn South towards the Belarus capital.

Analyzing the data, Vadim Lukashevich, an aviation expert in Moscow, said in a Facebook post he was convinced that the Ryanair pilots had been told they would die if they did not divert. “I am absolutely sure that the crew of the passenger airliner turned around only after receiving a notification from the Belarusian fighter that, in case of disobedience, it would open fire before the passenger plane left the airspace of Belarus,” Lukashevich wrote on Facebook on Sunday night. Ryanair has not commented on whether the pilots were threatened with an armed attack in the air.

The FlightRadar24 data also showed that the plane was flying higher and faster than normal for the final minutes of its trip, suggesting that it may have been trying to outfly the fighter jet. That likely made for a terrifying ordeal for the commercial pilots who had assumed they were on a routine journey between two European cities, both capitals of NATO member countries—and technically a domestic flight within the borderless, 27-country E.U.

“We don’t know if they really would have been shot down,” said Stanionis, the policy advisor in the E.U. Parliament. “But it is just a matter of pressing a button on a MiG-29.” In addition, the operation appeared to be a complex mission, well-planned likely from the top ranks of Belarus’s military—and perhaps Lukashenko himself. “If the object was to detain Raman [Protasevich] you [would] need to know when he is boarding, have access to registration systems, plan all the possible communication with ground control centers,” Stanionis says. “You need to look at different scenarios, and coordinate with air forces.”

U.S. Secretary of State Antony Blinken called the incident a “brazen and shocking act,” and demanded an international investigation.

But Tikhanovskaya says action is needed as much as investigations, especially given the dire conditions in Belarus’s prisons.

“There is sexual abuse, women are strip searched, there is stress positions for hours, cells are overcrowded,” she says, listing conditions that have been reported by former and current prisoners. “People from democratic countries cannot even imagine,” she says.

Despite the increased danger—even in the air between E.U. cities—Tikhanovskaya says she intends to continue traveling to meetings to pressure foreign leaders to take action against Belarus. “I have a row of official visits in the near future,” she says, declining to name the countries. “I will not delay any official visits.” 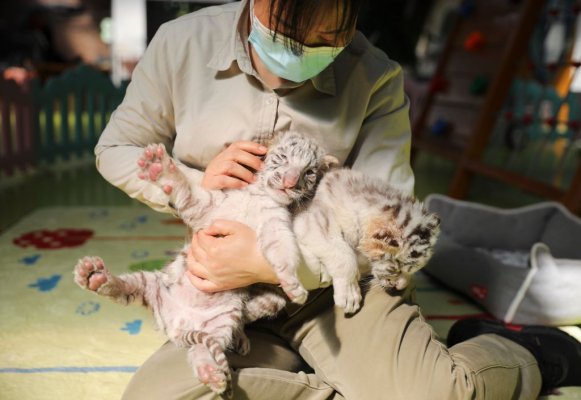