The darkness descends slowly for people with retinitis pigmentosa (RP), a degenerative eye disease that affects 2 million people worldwide. The condition is typically diagnosed in childhood or adolescence, but it can take until middle age before a person’s vision has deteriorated severely enough that they are fully or effectively blind. When the lights finally do go out, however, they stay out.

Or that’s the way things used to be. In a breakthrough study published today in Nature Medicine, investigators report a relatively simple yet remarkably effective way to restore partial vision to RP patients—one that, with further study, may soon have wide application.

The key lies in the rod-shaped photoreceptors that principally govern peripheral vision and the cone-shaped receptors that give us our central view of the world. In people with RP, mutations in more than 70 genes cause slow deterioration of the rods, leading to tunnel vision, and later the cones, leading to blindness. Light still streams into the eye through the unaffected lens, and that light could still make its way to the brain via the optic nerve. But the retina, which lies between the two, no longer works.

A team of researchers, led by Dr. José-Alain Sahel, professor of ophthalmology at Sorbonne University and the University of Pittsburgh, however, thought they might have a way to bring the retina back into the game: ChrimsonR, a protein that opens electrical channels in neurons and makes them reactive to light. The trick was finding a way to deliver the protein—and the answer was to genetically manipulate a harmless adenovirus so that it carried ChrimsonR; the virus was then injected into the fluid-filled portion of the eye behind the lens.

“The ChrimsonR sparks electrical activity,” says Sahel. “It transforms the cells and makes them able to absorb light, though it takes a while—about four months—for the cells to take up the virus and the protein with it.”

Nonhuman primate studies showed that the technique did not harm the eye, and also helped the researchers establish the proper dose of Chrimson4 to sensitize the retinal cells. For the human trial, Sahel and his team worked with a 58-year-old man who had been diagnosed with RP 40 years earlier and whose vision was limited to rudimentary light perception. They treated the poorer functioning of his two eyes—in order to spare the marginally healthier one if anything went wrong with the experiment—and injected it with a single dose of the altered virus.

Assuming the experiment worked, the next steps would not be nearly so simple as waiting the required four months or so until the man’s vision simply returned in the treated eye. ChrimsonR is not remotely sufficient to restore the exquisitely complex interplay of rods and cones that give healthy eyes their rich, colorful, three-dimensional view of the world. Rather, it sensitizes cells mostly in the amber spectrum, making shapes and shadows discernible at that color frequency. What’s more, a healthy retina reacts in real time to the amount and intensity of light striking it, becoming more reactive in low-light conditions and less reactive in bright light, to prevent damage to retinal cells. To see at all through the treated eye, the patient needs to wear a pair of goggles that shifts incoming light to the amber spectrum and regulates it to a safe intensity.

“The eye needs a lot of light, but there is the danger that it could be a toxic level,” says Sahel. “Without the goggles it could be like the patient looking directly into the sun.”

While waiting for the ChrimsonR to take effect, members of Sahel’s team worked with the patient, training him with the goggles and running tests to see if he could distinguish objects placed on a table, point to them, count them, and pick them up. Over repeated trials, there were no results—until finally, as Sahel recalls it, he got a call from one of his team members with a simple message: “He sees.”

At right around the four-month mark, the subject began achieving remarkable results on all of the lab tests. And in the months since that breakthrough, he has become able to navigate his world in new ways: he can detect the crosswalk at an intersection and count the number of white stripes demarcating it; perceive objects like a plate, a mug and a phone; spot a piece of furniture in a room and see a door in a corridor. “He can also,” adds Sahel, “detect where people are.”

Sahel believes the results will be long-lasting, or even close to permanent. “We think this could last at least 10 years or it could be for a lifetime,” he says. “If not, we can always go back and re-inject.”

As to whether the treatment is ready for practical application beyond the one patient, Sahel says the answer is “a small yes and a big no.” The small yes is that the work was merely a feasibility study (but by any measure, it succeeded spectacularly). The big no is that a great deal more research must be conducted to learn more about dosing levels, to improve both the goggles and the training patients go through to use them, and to figure out when in the course of a person’s RP is the right time to begin the treatment—Sahel notes that for now, at least the procedure is only for people with very advanced disease. “People with RP can retain central vision for many years,” he says. “You always have to weigh the benefit versus the risk.” 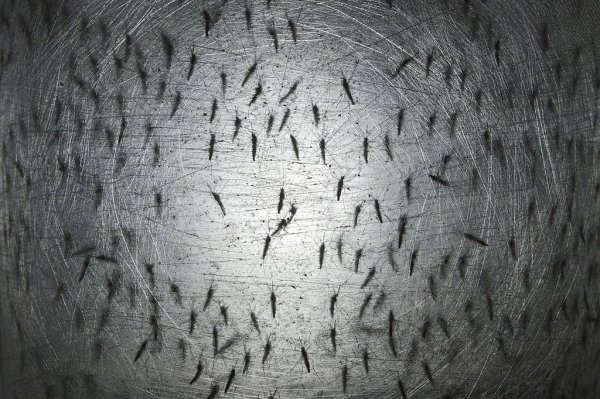 Genetically Modified Mosquitoes Have Come to the U.S
Next Up: Editor's Pick