A destroyed house seen after a ceasefire between Israel and Gaza fighters, in Beit Hanun town northern Gaza Strip, 21 May 2021.
Photo by Momen Faiz/NurPhoto via Getty Images
Ideas
By Ian Bremmer
Bremmer is a foreign affairs columnist and editor-at-large at TIME. He is the president of Eurasia Group, a political-risk consultancy, and GZERO Media, a company dedicated to providing intelligent and engaging coverage of international affairs. He teaches applied geopolitics at Columbia University’s School of International and Public Affairs and his most recent book is Us vs. Them: The Failure of Globalism.

It took 11 days, but Israel and Hamas finally agreed to a ceasefire that ended their latest round of deadly violence. More than 250 people, many of them civilian men, women, and children caught in the crossfire, were killed in their exchanges, the overwhelming majority in Gaza. Predictably, both sides claimed victory.

From a political standpoint, President Joe Biden hasn’t achieved anything. Here are 7 reasons why.

1. This episode exposed Biden’s inability to referee this fight.

As Hamas fired missiles toward Jerusalem, Tel Aviv, and other parts of Israel, no one could persuade Israeli Prime Minister Benjamin Netanyahu to stop his military from pounding Hamas targets in Gaza. There are issues on which U.S. presidents can pressure Israeli leaders to change tack, but that’s much harder to accomplish when the entire Israeli political establishment is united behind actions in defense of national security, as it was in this case. A recent poll found that 72 percent of Israelis opposed a ceasefire until significant damage had been inflicted on Hamas and its ability to fire rockets. Biden resisted calls to demand a ceasefire for as long as he could, because he knew U.S. prestige and his credibility would take a hit when his calls were ignored.

2. Biden’s lack of leverage with Israel left him no real influence with Hamas.

Leaders of Hamas knew that if Biden couldn’t get Netanyahu to hold Israel’s fire, a halt to Hamas’s own attacks would amount to surrender. And Biden knows he can’t always turn to Arab governments, as past presidents could, to talk with Hamas. Egypt has some sway with Hamas and played a lead role in brokering the ceasefire, but the Egyptian government’s sympathy for Islamic militants in both Hamas and the allied Palestinian Islamic Jihad is tempered by its desire to contain religious militancy at home. They can’t be expected to play this role as consistently as they did a decade ago.

The United Arab Emirates, which, along with Bahrain, Morocco, and Sudan, normalized relations with Israel last year as part of the Trump administration-brokered Abraham Accords, were also in a bind. To justify the normalization of ties with Israel, these Arab governments claimed their new relations would help them limit Israeli strikes against Palestinians. This latest conflict made them look bad, too. That’s why they condemned Israeli actions and urged “restraint,” but they won’t walk away from potentially profitable ties with Israel. The Saudis denounced Israeli actions, but the two governments share a common interest in containing common foe Iran. Biden understands that, the next time Israel and Hamas come to blows, it will be even harder to find someone willing and able to restrain Hamas.

3. There is no viable long-term plan to keep this from happening yet again.

For now, Israel and Hamas have agreed to hold their fire. Yet, no progress toward a lasting solution has been made to prevent this from happening again. The Trump Administration was able to broker a deal between Israel and some Arab governments, but there’s little hope for a settlement of hostilities directly between Israel and Palestinians.

Israel’s geopolitical position has never been stronger. Criticism of its actions will continue from all sides, but no one will act effectively to coerce its government to change its approach to Palestinians. And the Palestinian leadership remains divided. The decision by the Palestinian Authority to indefinitely delay a recent election that Hamas would likely have won leaves Israel conveniently without a Palestinian negotiating partner that can credibly speak for all Palestinians.

The Biden administration understands all this, and with a limited amount of time to advance his agenda through Congress before elections in November 2022 that might cost Democrats their majorities in one or both houses, the president isn’t looking for a fight he can’t win.

4. When it does happen again, Biden won’t have any more leverage than he had this time.

He has said he’s unwilling to threaten a cut off of financial or military support for Israel to change Israeli policy. The U.S. sends Israel $3.8 billion in military aid each year as part of a 2016 agreement between Israel and the Obama Administration, in which Biden was a central figure. In October 2019, during the early days of his campaign for president, Biden said, “The idea that we would draw military assistance from Israel on the condition that they change a specific policy I find to be absolutely outrageous.” To back away from such a pledge as Hamas fired rockets at Israel would have been unthinkable, and there is no evidence that Biden would consider such an option.

5. Congress won’t support a pressure campaign, even if Biden wanted one.

Despite calls from some progressive Democrats to halt support for Israel without changes in Israeli policy, three-quarters of the members of the House of representatives signed a letter last month that pledges the U.S. will not impose any conditions on U.S. aid to Israel.

Biden heard it from both sides over the past two weeks. Republicans charged that Biden failed to stand up for a loyal ally and fellow democracy under direct attack by Islamist terrorists. (The U.S., E.U., and U.K. have all designated Hamas’ military wing as a terrorist group.) “President Biden must remain strong against the growing voices within his own party that create false equivalence between terrorist aggressors and a responsible state defending itself,” said Senate Republican leader Mitch McConnell last week.

Many Democrats continue to support Israel’s absolute right to defend its people, but others say its attacks on Gaza went much too far. This criticism isn’t limited to progressives like Alexandria Ocasio-Cortez (D-NY), who has referred to Israel as an “apartheid state,” but also to staunch long-time defenders of Israel like Senator Robert Menendez (D-NJ), who said before the ceasefire that he was “deeply troubled” by Israeli strikes in Gaza. Menendez has called for a “full accounting of actions that have led to civilian deaths and destruction of media outlets.”

7. Biden’s inability to act decisively during this episode will have broader foreign policy implications.

On the Iran nuclear deal negotiations, this makes it harder for each side to make the compromises needed to get a deal done before the Iran election. The Iranians view Israel as totally controlled by the U.S., and Iran’s support for Hamas, especially its supply of weapons, makes the domestic politics of a deal tougher for Biden. This story also feeds the Chinese belief in American decline.

How fast, you ask, can an electric truck accelerate? Put President Biden behind the wheel and ask him an Israel policy question, and you’ll find out. 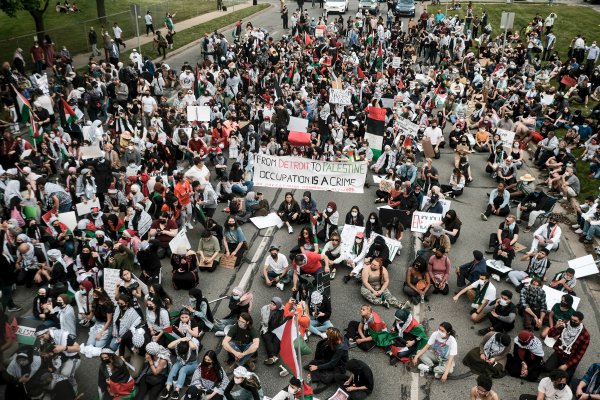 How Support for Palestinian Rights Is Going Mainstream
Next Up: Editor's Pick