If you were passionate about personal computers between the mid-1970s and mid-1980s, the odds were high that you were a reader of Byte magazine. And if you read Byte, you were surely a fan of Robert Tinney, the artist whose cover paintings were one of the magazine’s signature features for years.

Tinney’s work was imaginative, technically superb (he is a master of the airbrush) and, sometimes, very funny. Byte lost a little bit of its soul when the publication started phasing out his work in favor of standard-issue photos of standard-issue computers.

While rummaging around the web last week looking for something else, I came across his cover for Byte‘s April 1981 issue at the Internet Archive. I immediately shared it on Twitter, where it got about as enthusiastic a response as anything I’ve ever tweeted. There it is at the top of this post, with the artist’s permission.

This is, obviously, an amusing image. The notion that a wrist computer might have a floppy-disk drive, a QWERTY keyboard and a tiny text-based interface was a good joke in 1981, and an even better one when seen through the lens of nostalgia. (If you’re tempted to assume that the image was actually a serious depiction of what a future wrist computer might look like–well, no. Inside the magazine, which only had a brief editiorial about future computers, the editors pointed out that it wasn’t a coincidence that it happened to be the April issue of Byte.)

But I also find this art–which Tinney still offers as a limited-edition print–to be quite profound, on multiple levels. Here’s why.

First, it reminds us that the smartwatch is not a new idea. Even in 1981, tech companies had been trying to build them for awhile: Tinney’s creation is a pseudo-logical extension of ideas expressed in real devices such as HP’s HP-01, a “personal information assistant” introduced in 1977. (Of course, people have been obssessed with the notion of strapping advanced communications gadgetry to their wrists since at least 1946, when Dick Tracy got his wrist radio.)

Here we are in the 21st century. The tech industry has lately made progress on this smartwatch idea, but it’s still not a problem that anyone’s completely solved, which is why it still isn’t part of everyday life. You could do a “Future Computers” cover today and put a concept smartwatch on it, just as Byte did in 1981.

Second, for all the ways technology has radically improved in the past 33 years, the current crop of smartwatches actually have a lot in common with Tinney’s concept. The industry is still struggling with questions of display technology, input and storage, and one of the best efforts so far, the Pebble Steel, even looks eerily like the Tinney watch, sans QWERTY.

But most of all, the Tinney watch is a wonderful visual explanation of why human beings–most of us, anyhow–aren’t very good at predicting the future of technology. We tend to think that new products will be a lot like the ones we know. We shoehorn existing concepts where they don’t belong. Oftentimes, we don’t dream big enough.

(One classic example: When it became clear that Apple was working on an “iPhone,” almost all the speculation involved something that was either a lot like an iPod, or a lot like other phones of the time. As far as I know, nobody expected anything remotely like the epoch-shifting device Apple released.)

Tinney’s painting is a gag, but it’s not that far removed from what a serious futurist might have predicted in 1981. It’s a PC of the era, downsized to fit the wrist.

Back then, a pundit who started talking about gigabytes of storage or high-resolution color screens or instant access to computers around the world or built-in cameras and music players would have been accused of indulging in science fiction. Even though some of the earliest ancestors of modern interfaces existed in laboratories in places such as Xerox’s Palo Alto Research Center, I don’t know if it would have even occurred to anyone to envision them being built into a watch.

And today? Much of the thinking about smartwatches involves devices that look suspiciously like shrunken smartphones. That’s what we know. But I won’t be the least bit surprised if the first transcendently important wearable device of our era–the iPhone of its category–turns out to have only slightly more in common with a 2014 smartphone than it does with a 1981 computer. 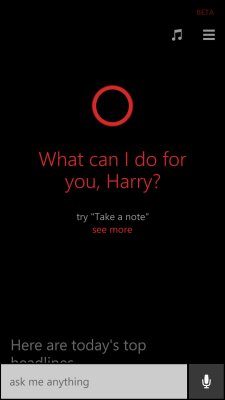 Windows Phone 8.1 Review: Microsoft Is Almost Caught Up
Next Up: Editor's Pick