Bill Clinton and James Patterson on Their New Presidential Thriller, Political Tribalism and Advice for Trump

Three years after writing a bestselling novel together, former President Bill Clinton and author James Patterson are back with their second: The President’s Daughter, published jointly by Knopf and Little, Brown and Company on June 7.

The novel follows a former president and onetime Navy SEAL who must rescue his kidnapped daughter. Using Clinton’s intimate knowledge of the workings of the presidency and Patterson’s proven methods for plotting suspense, the two men have written a book that takes readers swiftly from political machinations in Washington to shocking violence in New Hampshire to terrorist hideouts in Libya. They’re betting that a page-turner presidential thriller is just the kind of book readers are craving right now: “I think they’re hungry for it,” says Clinton, who is himself a longtime fan of Patterson’s.

Clinton and Patterson spoke to TIME by phone on May 20. (When he joined the call, Clinton said he had just finished talking with U.S. climate envoy John Kerry about “a deal on climate change in the Caribbean.”)

The following interview has been edited for length and clarity.

TIME: I’ve heard you both prefer writing longhand. So is it fair to assume you didn’t write this book in a shared Google Doc?

CLINTON: The first thing we do is we agree on an outline. Then Jim says okay, your job is to make sure it’s authentic. He’ll send me a draft of a couple chapters and then we go back over and over and over again, often trying to make sure that we fill these characters out. You want them to come alive, and the trick of a really good thriller is to have a hell of a good plot and make it exciting.

PATTERSON: We probably went back and forth on the outline half a dozen times. It kept changing. We always want to be fluid with where the story is going.

Are there any examples of a detail about the presidency that President Clinton added or corrected that you found particularly surprising?

PATTERSON: A lot about NATO, how NATO used to work and hopefully will work in the future.

CLINTON: I wanted to make sure that people understand when you start killing people, whether you’ve got bullets up close or dropping bombs in the distance, there’s going to be some collateral damage. And those people are people too, and they never get over it. They get scarred. So you have two cases of this in this book.

PATTERSON: If you think about the movies and TV shows and books that you’ve read about presidents, most of them don’t ring very true and the presidents aren’t very realistic. That always bothered me, and one of the things with both of these books, and I couldn’t have even come close to this without President Clinton’s help, is how realistic these people are, how human they are.

The main thrust of this plot is a former president going on a rogue mission to rescue his kidnapped daughter. President Clinton, did you ever fear that Chelsea might be kidnapped?

CLINTON: Oh, sure. We try to explain here how Secret Service protection works for former presidents and people in the family, and how the kids lose it. Past that, you’ve got to figure it out. After 9/11, I worried.

PATTERSON: All parents worry about their kids. That’s what makes this a universal thing. We all have nightmares about our kids.

This book—like your first novel together—takes a rather dim view of modern politics. You write: “From Twitter mobs to focus groups, nothing can get done anymore.” How do we get back on track?

CLINTON: First of all, you have to realize that you’re doing two things at once all the time if you’re somebody who wants to get back on track. You’re dealing with the facts at hand. If somebody disagrees with you based on an agreed set of facts where they would read it different than you did, that’s human nature. That’s a debate in a healthy democracy. Nobody’s right all the time and a broken clock’s right twice a day, and we live in the gray area between those two extremes. The second thing you have to realize is that somebody said, if the contest is between belonging and the facts, the facts will lose every time. And the new Republican right is brilliant at making everything into an us versus them identity conflict. And so the only thing that matters is whose side you’re on. So my best effort, for example, in 2016, was to say the difference between Hillary and Trump is that it’s pretty clear that he is determined to maintain this divisive attitude because he thinks it helps politically. And it did help him. But he doesn’t want us to be part of his America. We at least do want you to be part of our America. I said that in West Virginia in the primary, and every place else I campaigned. People have got to be able to look at a picture of tomorrow and see themselves in it. And now, we have everybody looking at different pictures of tomorrow.

PATTERSON: One of the things about Keating in this book and Duncan in the past book [the two fictional presidents], is they’re good human beings. That’s a piece of it. They stand up for what they believe in. And obviously that’s difficult, as Liz Cheney has just found out, to stand up for what you believe in.

You wrote this book during Donald Trump’s presidency. Do you worry that after the chaos of Trump’s term, readers might not have as much of an appetite for political thrillers anymore?

PATTERSON: Nope. I think they have more of an appetite.

CLINTON: No. I think they’re hungry for it.

In the book, you write that “thorny issues dividing Israelis and Palestinians” will “bedevil whoever occupies the Oval Office.” With the recent eruption of violence there, should Biden take this moment to launch a full court press to bring Israel and the Palestinians to the negotiating table? [This conversation took place before the May 21 ceasefire started.]

CLINTON: First, we need to put a lot of pieces in place before he just says, let’s start to talk. We need a ceasefire. We need a serious commitment to deal with the physical damage done in Gaza, and how that’s going to happen. And then we need to start getting other people in the region involved and try to get an agreement on and some control over all the missiles and the tunnels… You could still make quite a significant two state situation, but I do not believe that the Israelis will agree—ever—to give up the Jewish state. And basically, that’s what is being advocated now, ‘Oh, we’ll just have one state.’

Joe Biden is four years older than both of you. Would you want to be doing that job right now?

PATTERSON: I’m out of this, because I’m number two in my own house.

CLINTON: I think he’s doing a good job. He’s trying to do what the economics of the time call for and what the public health imperatives call for. He’s trying to get us back into the real world on climate change and a host of other issues. And he’s doing it in a way and with a language that has a chance, if we produce good economic results, to capture some of the white working class. Meanwhile the Republicans have clearly decided to double down on the Hatfields and McCoys. This is not about the facts, this is about whose side are you on. Now they want to get it where they can win if they lose both the Electoral College and the popular vote by having a Congress that won’t certify the electors. I mean, that’s basically what this is about. We can write a novel about that down the road. Meanwhile, the rest of us need to be thinking about what we can do to rebuild a country and talk sense to everybody and be for inclusive tribalism, not divisive tribalism.

You definitely have plenty of fodder and inspiration for future plots.

CLINTON: The way Patterson writes novels that draw you in, it’s also a safe space to say things that need saying. I love [Patterson’s Michael Bennett series]. But after you read it, you could never believe that you should, in a dangerous world with a crime rate going up again, defund the police. But you understand, just from reading it, how important it is that police be properly trained, try to defuse violence first, and realize that the level of force brought to bear has to have something to do not only with the actual conduct of the person, but also with the nature of the threat. People don’t have to check their identity at the door to start thinking clearly. That’s what Patterson does with his books, and that’s what we’ve got to do as a country.

What were your favorite books that you read during the past year of mostly being stuck in our homes?

PATTERSON: Empire of Pain. The Apollo Murders, that isn’t out yet.

CLINTON: I finally read Isabel Wilkerson’s Caste, and I loved it.

PATTERSON: That’s such a smart idea. I love the idea of that book.

CLINTON: I read a bunch of other novels. I read Walter Mosley’s latest novel. I read Vera by Carol Edgarian, which I liked very much. And Jim, you sent me a Chris Whitaker book, didn’t you?

PATTERSON: Yeah, that guy’s good too. Mark Sullivan, one of my co-writers, has a great one out now: The Last Green Valley. It’s wonderful.

I’m interested in the idea of creating a meaningful post presidency. In the book, the former president was settling into life in rural New Hampshire before his daughter goes missing. In real life, you, President Clinton, have discovered writing these thrillers. President Bush found painting. What advice do you have for former President Trump on finding passion and purpose after holding the most powerful office in the world?

PATTERSON: [Laughs] That’s a hell of a question.

CLINTON: I don’t have any advice for him, because, as he so famously said at the outbreak of COVID when they asked him if he’d talked to President Bush or President Obama or me, ‘I really don’t have anything to learn from them.’ If he called me, I’d do with him what I’d do with anybody: I’d give him my advice. I basically think you have to figure it out. If you’ve ever been president, you never discharge fully your obligation to the country or to the American people, because they’ve given you the best job in the world and the best years of your life. But you have to find what else you do. George Bush has not only become an artist, he’s been faithful with trying to help wounded veterans and he and Laura have worked to support women in Afghanistan. He’s done a lot of stuff. And I think that’s what I try to do. I’m writing a book about that [Clinton’s post-presidency], so that’s my serious book. I’m almost done with it now.

PATTERSON: That’s your other serious book. Tessa, the problem with your question is that President Trump does not think this is a post-presidency… That he isn’t president right now. 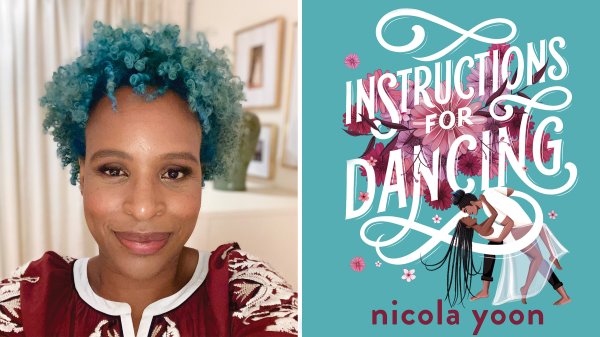 Nicola Yoon on Her New Book 'Instructions for Dancing'
Next Up: Editor's Pick