This year’s musical offerings have been a scattered bunch: with the music industry still on a pandemic-induced slowdown, the output in the first half of the year has been less commercial than highly personal, narratively complex and, at times, surprisingly collaborative. We likely have quarantine to thank for that, a time during which artists could craft something cohesive on their own schedules. Besides Taylor Swift’s buzzy re-release of her 2008 album Fearless, the albums of the year so far have not been blockbusters, but projects to sit with and stew over, as some of the industry’s biggest stars continue to bide their time before making a comeback. Consider: Julien Baker’s melancholy, personal rock; the unlikely combo of a jazz musician and electronic DJ in Promises; Jazmine Sullivan’s intimate embrace of female sexuality in a project that sounds and feels like a warm bath. These are the best albums of 2021 so far.

Little Oblivions begins with the bleary stop-and-start of static, which turns into the backbone of a melody, one that comes in and out of focus just like the story Julien Baker tells. “Blacked out on a weekday, still something that I’m trying to avoid,” she sings, voice low. “Start asking for forgiveness in advance/ for all the future things I will destroy.” She’s defeated but unflinching, a messed-up human still in the throes of messing up, yet self-aware. Addiction, trauma, alienation: Baker is a singer-songwriter keen to bare her scars. Her art is her balm, where stories about bad nights become soothing songs that help mend the memories. It’s also beautifully raw, with lyrics that hit pressure points: “Oh, there is no glory in love, only the gore of our hearts/ Oh, let it come for my throat, take me and tear me apart.” Her voice, baleful and clear, is full of the need to be heard and understood, whether she’s whispering confessions or finding release in an extended, tuneful screech. — Raisa Bruner

What do an 80-year-old jazz saxophonist from Little Rock and a millennial electronic DJ from Manchester have in common? Plenty, it turns out: a delight in gentle soundscapes and sharp disruptions; an endless curiosity and collaborative generosity; a spellbinding capacity to conjure complete immersion. Promises, a new project from Pharoah Sanders, Floating Points and the London Symphony Orchestra, is a remarkable experiment in multi-genre, multi-generational mind-melding. The 46-minute album is organized around one motif, with harpsichords, synthesizers, swelling string melodies drifting in and out; Sanders amazes both through his voluminous saxophone and his wispy voice. Its serenity might put you to sleep—but then its stabs of energy will jolt you right awake again. — Andrew R. Chow

In her fourth album, Jazmine Sullivan claims her place as R&B’s most honest voice right now. Heaux Tales isn’t just an album: it’s an unvarnished confessional and communal reckoning with Black female desire, featuring the spoken-word romantic experiences of an array of women in its thoughtful interludes. The songs, meanwhile, are rich with warm riffs, finger-snap beats and languorous keys. “Our society teaches them to be so wrapped up in themselves and their own conquests that they forget that we’re sexual beings ourselves,” goes one meditation on relationships in “Antoinette’s Tale.” Taken as a whole, the album comes off as a healing project, an offering to women everywhere to value themselves wholly, even when their desires are messy or conflicting, eager or cautious. Through it all, Sullivan’s flexible voice rises and falls, smooth and endlessly listenable. — R.B.

The latest album from Miranda Lambert, one of country music’s most enduring stars, has none of Nashville’s typical sheen: it was recorded live in a house in the Texas desert, with her and two longtime collaborators, Jack Ingram and Jon Randall, crowded around a pair of microphones. The rough edges are palpable: the trio forgets lyrics; planes hum overhead; cold cans are cracked open. But what the album lacks in polish is more than made up for in chemistry and complexion. The best songs, including “Waxahachie” and “In His Arms,” drip with stunning harmony and warmth, and could be easily mistaken for long-lost campfire classics. The album feels Edenic and, given Lambert’s stature, potentially transformative: a cultural reset on the level of acoustic masterpieces like Willie Nelson’s Red Headed Stranger or Bruce Springsteen’s Nebraska. — A.C.

Sinuous, meditative, tender, haunting: there are plenty of adjectives you could apply to serpentwithfeet’s Deacon, but none of them quite illustrate the tenor of his music, which is equal parts inviting and shiver-inducing. Serpentwithfeet, real name Josiah Wise, mixes gospel choruses with intimate directives; on Deacon, the British artist’s third album, a new warmth glosses his darker tendencies. Piano is everywhere, as are echoing beats and layered lyrics that celebrate love and satisfied same-sex domesticity: on “Derrick’s Beard,” a pared-down ballad of sorts, he repeats the line “Come over here, missing your beard” for over two minutes. But in Serpentwithfeet’s capable hands, every repetition feels like a sweet revelation. — R.B.

The U.K. superproducer Fred Gibson has lent his deft touch to superhits by artists like Ed Sheeran, Ellie Goulding and Stormzy for years. Since the pandemic, he’s embraced his more angular, experimental side in collaborations with FKA Twigs and Headie One. And this April, he released his debut album Actual Life, which was recorded over quarantine and summons a global community via aural collage. (The legendary electronic producer Brian Eno served as a collaborator on the project.) Gibson weaves voice memos from friends and Instagram soundbites into beatific house beats, creating both a deep intimacy and a party soundtrack that begs to be spun at newly reopened nightclubs. There isn’t much subtlety here: ”We’ve lost the hugs with friends and people that wе loved/ All these things that wе took for granted,” The Blessed Madonna cries out on the single “Marea (We’ve Lost Dancing).” But the record offers some much needed catharsis after a year of disconnect. — A.C.

Correction, June 16. The original version of this story misstated the title of a song by Jack Ingram, Miranda Lambert and Jon Randall. It is called “In His Arms,” not “In Her Arms.” 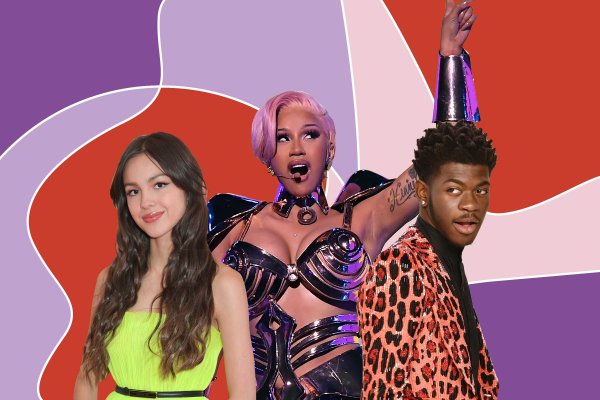