The best songs of the year so far have come from newcomers and veterans alike. They originate from all around the globe: South Africa, Puerto Rico, Los Angeles. One is designed to be as short as possible; another stretches on for nearly eight minutes. From Arooj Aftab’s blissful and enveloping “Mohabbat” to a song that could serve as Lana Del Rey’s mission statement, here are the tracks we will have on repeat for months to come.

There’s nothing much on “Up” that we haven’t heard from Cardi B before, and that absolutely doesn’t matter. The no. 1 single—Cardi’s fifth such chart-topper—plays to all of her strengths: tongue-twisting alliteration; a terse beat that will wreck your subwoofer; brazenly lewd imagery destined to soundtrack countless TikTok videos of fuming moms. (The song has been deployed in over 3 million TikTok videos already—and also gave rise to one of the most delightful meme challenges this year.) “Big bag bussin’ out the Bentley Bentayga/ Man, Balenciaga Bardi back and all these bitches f-cked,” Cardi barks. Just another day at the office for hip-hop’s top provocateur. — Andrew R. Chow

Olivia Rodrigo started her ascent to stardom gently, with the nostalgic heart-tug of “Drivers License” and the salty sadness of “Deja Vu.” But “Good 4 U,” the third release off of the of-the-moment Disney actor’s debut album Sour, shows that she’s no saccharine pop princess. Feminine anger has a complex place in music; mad women aren’t always given space to express the breadth of their emotions. Thankfully, Rodrigo isn’t worried about that. With pop-punk intensity, she sing-talks her way through a song that’s unapologetically bitter and spiteful, with a guitar-driven chorus that just asks for a cathartic singalong. It may not be the song that propels her career to new heights—she’s already got “Drivers License” for that—but it might just be the one to which a generation turns to vent some frustration. —Raisa Bruner

The Pakistan-born, Brooklyn-based composer has earned critical acclaim for her contemplative album Vulture Prince, which pulls from musical traditions from across the world. The project’s standout is “Mohabbat,” which was adapted from a 19th century Urdu song poem while also seamlessly utilizing vocal jazz techniques and a gentle guitar drone reminiscent of Led Zeppelin’s “Going to California.” Despite the song’s 7:42 runtime, nary a phrase feels excessive or needless; Aftab’s quivering vocals create and resolve a tightrope tension, offering a blissful and enveloping respite from the year’s chaos. — A.R.C.

The only problem with Lil Nas X’s latest offering to the chart gods? It’s simply too short. “Montero” is persistent and insistent, an unlikely hand-clap beat, licks of Spanish guitar and an echoing, hummed chorus flicking at both flamenco and Gregorian chants. That’s intentional; in its controversy-baiting music video, Lil Nas X uses religious iconography to trace a history of LGBTQ persecution. But “Montero,” purely as a song, is an infectious celebration of desire: “Call me when you want, call me when you want, call me out by your name, I’ll be on the way.” It’s a powerful, liberated message from a young star who rose to stratospheric heights with “Old Town Road,” and is now setting out to prove he has much more to say as an artist. — R.B.

Like the megahits “Hips Don’t Lie” and “I Like It” before it, “Pin Pin” heavily relies on a pristine sample from the salsa crates. This time, it’s Tommy Olivencia y Su Orquesta’s joyous “Periquito Pin Pin.” Towers gives plenty of room for the sample to breathe—even shouting out Olivencia in the second verse—while deftly adding his silky boom-bap rap cadences. The song—as well as the overarching album Lyke Myke—offer irrefutable proof as to why Towers is one of the fastest-rising stars to come out of Puerto Rico and Latin America at large. — A.R.C.

“Not All Who Wander Are Lost,” Lana Del Rey

When she made her mainstream debut in 2011 with “Video Games,” Lana Del Rey put forward a very specific artist persona: the lost princess of West Coast Americana, an underdog character following the wind from one low-rent town to another, one problematic man to another. Over six albums, she has not veered far from this course, even as she’s experimented with pop elements and poetic overtures. “Not All Who Wander Are Lost,” a mid-album track of her latest offering Chemtrails Over the Country Club, could serve as a kind of mission statement of her original artistic endeavor. “I’ve been wearing the same damn clothes for three damn days/ Lincoln, Nebraska’s got me in a haze/ The thing about men like you is you’ve got a lot to say, but will you stay?” It’s an indictment and a romanticization of the life of wanderlust she has embodied in her lyrics over the years; it’s also, with the angelic falsetto chorus, a plea to be left to do what she likes. — R.B.

Amapiano, a South African house subgenre that often marries seizing basslines with delicate piano or synth lines, has exploded in popularity over the last few years. On this song, two South African stars who have been turbocharging dancefloors across their country—the DJ and producer Vigro Deep and the rapper Focalistic—are joined by Nigerian Afrobeats king Davido for a bombastic intercontinental smash. One YouTube user summed it up quite well in the video’s comments section: “I am becoming a bit selfish with this song with repeated plays, simply to hear the Surrounds systems inside my car react. It is mad.” — A.R.C. 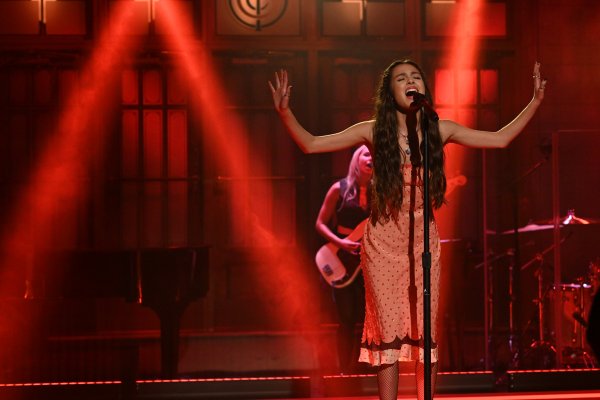