It’s the afternoon of May 11, the day that Patti Harrison’s new movie, Together Together, is releasing on VOD. She’s been in “a little brain fog,” she tells me from her home in East Los Angeles, the way she usually feels when her projects come out. How does she feel about seeing feedback about the new film? “I approach it the same way as when I watch a scary movie—I squint my eyes, or look in the margin.” And how is she feeling in general? “I’m having some bloating and stomach indigestion stuff, just in my house in my fart zone, really soaking it up and trying to be as relaxed as I can be.”

That we’re talking about digestive systems in the first five minutes of conversation is a little unusual, but Harrison makes it feel somewhat ordinary. The 30-year-old actor and comedian has a knack for finding the humor in the uncomfortable, talking about the gross-out “stuff” as a matter of fact. It’s a contrast to her role in Together Together as Anna, a young woman hired as the gestational surrogate for Matt, played by Ed Helms. Harrison describes Anna as a more grounded character than the lighter or more playful roles she’s had in the past. “A lot of the other things that I play are way more hammy or comedic roles. And this was definitely something that I wanted to make feel more real.”

In 2017, Harrison gained viral attention for her monologue responding to then-President Trump’s transgender military ban on The Tonight Show Starring Jimmy Fallon; two years later, TIME named her as one of a new class of writers and performers redefining comedy. Since then, she’s become ubiquitous, appearing in Shrill and Made for Love, and becoming the first openly transgender actor cast in a Disney animated movie in Raya and the Last Dragon, released earlier this year. Harrison talked to TIME about her latest role, her hopes for transgender characters in entertainment, and why she thinks Instagram is the least worst social media platform.

TIME: You’ve been called a scene-stealer for your appearances in several series and films. How does it feel to be in your first lead role in Together Together?

Harrison: It definitely is exciting and it’s nerve racking. I’ve never had to look at my face this much onscreen, which is its own hell. I’m trying not to over-obsess because I will get overwhelmed by anxiety if I do. I feel like I’m gonna look back on this moment and be like, Man, I wish I wasn’t so scatterbrained, scratching my eyes out about all this stuff, and I would have just enjoyed it.

What drew you to this story?

The log line of the script was really simple: a girl in her 20s becomes a surrogate for a middle-aged single guy. And I was like, it’s just gonna be some sh-tty rom-com that does a lot of gross things, and falls into a lot of these stomach-churning tropes I’ve seen a million times. When I read the script, it sets a lot of those things up and lays out those expectations, but as it went on, it was subverting a lot of those. I thought it was just so razor sharp, in this very gentle way. [Writer and director] Nikole Beckwith is like if you were being attacked by a bush baby that had like a box cutter—it’s a movie that’s adorable and has a kindness and care to it, but it also has this surgical sharpness and a criticism to it.

The film’s ending is left open and ambiguous. Do you think we have too many expectations of romantic comedies and how they should end?

I feel like the most controversial part of the movie is the ending. And I absolutely 100% agree with Nikole’s choice, I think it’s perfect. There are all of these structural expectations we have from watching movies in a genre that are so formulaic. A trope in romantic comedies is that storybook ending where every end is tied up in a bow and it feels great because they lived happily ever after. That’s not the story that Nicole’s interested in telling and is so far from the point of the movie. You can’t control how people interpret things once you put them out. With the ending, I think Nicole made the much more interesting choice, which I’m always for—I’m always pro-being challenging.

What was your relationship to romantic comedies as a viewer growing up?

There are so many rom-coms that I think are insane. But they’re the kind of movies that I put on when I need something that I know isn’t gonna horrify me before I go to sleep. You know it’s going to be low risk. For the most part, I’m not a huge fan of the genre, but I loved Forgetting Sarah Marshall growing up, While You Were Sleeping, Sleepless in Seattle. I have seen a billion rom-coms, but the majority I’ve been hate-watching on purpose, to laugh at them and not with them.

Patti Harrison in "Together Together."
Tiffany Roohani—Bleecker Street Ed Helms and

You’ve done improv, stand-up, sketch, voice acting and more traditional film and TV roles now. Where do you feel most at home as a performer?

Comedy. I think that is just more familiar. Working on this movie has been an amazing experience and it has made me imagine doing more dramatic stuff, but that’s definitely a scarier prospect. Being a comedian is so fun, and there’s so much autonomy to it. I don’t want to be solely a dramatic actor. It’s such an important part of my quality of life to goof around and talk about my farts.

How would you describe your sense of humor?

I feel cringey to say it out loud. I would say I like absurd stuff, I like the silly stuff. I hope I actually get the cover of TIME, and my request would be to have the quote as “I like silly stuff.” I definitely have a dark sense of humor, and in ways I think that comes from having a lot of childhood trauma—a little bit, not fully. I’m trying to be lighter in my adult life, and trying not to dwell in dark comedic spaces. But that’s what I’ve been drawn to, up until now.

You recently won an Annie Award for writing an episode of Big Mouth featuring the storyline of a transgender teenager, Natalie. How do you feel about the impact of that?

It’s been nice to see people respond to it in a really positive way. It’s interesting to win an award for that, because the way scripts work, at least in that room, is that people get assigned episodes and ultimately there’s a big group of people working on each script together. There’s so much in it that is collaborative beyond just me and Andrew [Goldberg, the episode’s co-writer]. But I hope there’s more opportunities for trans characters in animated series, where they’re there beyond just to tell a story about them being trans. I hope there’s that opportunity for a character to be voiced by a trans actor and we may or may not know that character is trans, that it’s not important to their story. That is what I hope for the future, in general—not just in animation.

Your Instagram always makes me laugh. Do you see the platform as another outlet for performance? Has your relationship with it changed over the last year?

Having my Instagram account is what I think helped start my career. I think out of the three big social media accounts, Instagram, Twitter and TikTok, Instagram is the least emotionally violent on you every day. I think they’re all extremely evil, but I think harassment on Instagram happens less. I’m trying to imagine how I can continue to be a successful comedian offline. So much of the industry has oriented towards social media. I want to get to the point where it has helped me enough where maybe I don’t need it, but I actually don’t necessarily feel like I’m at that point. The more followers that I get, the more stressful it is and the more criticism I get from random accounts. You’re opening yourself up to a bigger arena of people seeing your work.

With Together Together, it’s being marketed as this very wholesome movie, and the character I’m playing is very grounded. I know that it’s going to be some people’s introduction to me, and I just worry that my sense of humor online is pretty pornographic. Maybe that’s what I would say to answer your previous question—I’d like to redact my answer and say that I would describe my sense of humor as pornographic. I think that’s hard for some people to process and they make sure to tell me, and I’m trying to be better at just not paying it any mind. But sometimes I get really annoyed, and it gets to me, and then I have to go and turn off my phone, get a big whiff of my farts, and remember that I’m alive. You know, there’s other things to live for. 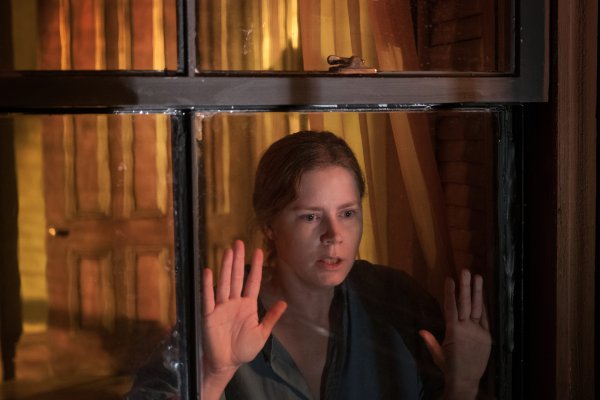 What to Know About The Woman in the Window as the Movie Adaptation Hits Netflix
Next Up: Editor's Pick