Outer space is rapidly becoming Outer Space, Inc., as the rise of private launch providers is making it increasingly easy to turn a buck in an industry that was once exclusively a not-for-profit government operation. The commercialization of low-Earth orbit took a big step forward yesterday, with NASA’s announcement that the space agency has inked a deal with Houston-based Axiom Space, in which Axiom will fly the first purely commercial crew to the International Space Station (ISS)—and pay NASA handsomely for the privilege.

“We are excited to see more people have access to spaceflight through this first private astronaut mission to the space station,” said Kathy Lueders, NASA’s associate administrator for human exploration and operations, during a May 10 press conference.

If all goes according to plan, Axiom’s four-man crew will take off for the station aboard a SpaceX Crew Dragon spacecraft sometime in Jan. 2021. The mission will be commanded by Axiom Vice President and former NASA astronaut Michael López-Alegría, a veteran of three space shuttle missions and one space station rotation. He will be joined by an international team of space rookies: American entrepreneur Larry Connor, Israeli investor and former fighter pilot Eytan Stibbe, and Canadian investor and philanthropist Mark Pathy. The crew will spend two days making their way to the station and eight days aboard, conducting scientific experiments along with the regular crew and promoting various charities in their home countries. They expect to be kept exceedingly busy.

“Eytan, Larry and Mark are not interested in being tourists,” says López-Alegría. “They are looking forward to doing meaningful work aboard the ISS as well as [publicizing] the Cleveland and Mayo Clinics, the Montreal Children’s Hospital Foundation and [Israel’s] Ramon Foundation.

In some ways, the crew had better work, because they and Axiom are spending top dollar to go to to space. In addition to the amount the astronauts are paying SpaceX for flying them to the station—officially undisclosed but estimated at about $55 million a seat—Axiom is paying NASA a hefty fee for playing host. Food for the visiting crew, for example, runs $2,000 per day per person. Clothing, hygiene products, sleeping bags and more add another $1,500 per person per day. And these are the small-ticket items. Simply launching those supplies from Earth aboard cargo vessels comes in at up to $164,000 per person, per day. The real sticker shock, however, comes from paying for the labor the long-duration space station crew members will perform while helping their visitors—another $5.2 million per mission. Space-to-ground communications, mission planning and execution add another $4.8 million.

The payments won’t go only one way: for example, NASA is paying Axiom $1.69 million for various services, including providing cold stowage aboard the Crew Dragon to ship station experiments back to Earth. As with many good business deals, everyone winds up making some money—though Axiom and its astronauts are clearly paying much more, mostly because they have the will and the wallet to do so.

“It’s true that right now, it’s not very democratic; you have to be in a pretty select demographic to be able to afford it,” said Lopez-Alegria. “But we’re all working to get the prices to come down. And I think if you follow the trend of costing, for example, commercial aviation, they all start out high and come down.”

NASA is entirely open to hosting other companies aboard the ISS, and expects at least some to step forward. But for now Axiom is the big—indeed only—dog. The company is looking to launch private crews to the station at a pace of about two per year, depending on the availability of docking ports at the ISS—which, with NASA and Russian cargo vehicles forever shuttling up supplies and private travel to the station only growing, can be as hard as finding a free gate at an airport.

“The traffic to and from ISS is growing considerable,” says Mike Suffredini, former director of the space station program and now president and CEO of Axiom. “There are only two available docking ports so port availability is a consideration.”

But if Axiom has its way, there will be more ports—and indeed more station—and therein lies a way for the company to make more money. In 2020, NASA and Axiom inked a deal for the company to add an additional module to the station, with a plan for two more to follow. In the mid-to-late 2020s, the ISS will be old enough to be retired and de-orbited, being sent on an incineration plunge through the atmosphere. Before it does, the newer, shinier Axiom modules will detach, becoming a free-flying, albeit modest, space station of their own. Axiom will then be the one charging fees to visiting crews—and setting the standard for other private stations that may want to follow its lead. Space, once run entirely on the government’s dime, is discovering the free market—and so far it likes it fine. 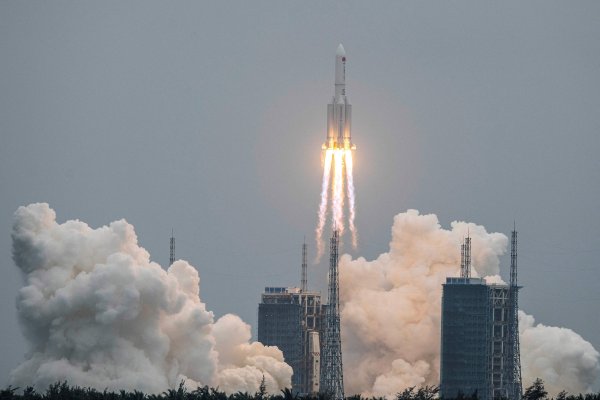 A Chinese Rocket Will Fall Back to Earth Soon. It (Probably) Won't Land On You
Next Up: Editor's Pick