'Needle Phobia' May Be Keeping Some From Getting Their COVID-19 Vaccine. Here's How to Cope

Alex Denley, a 23-year-old philosophy doctoral student at the University of Illinois at Chicago, doesn’t seem like someone who would be vaccine hesitant. They’re determined to stop COVID-19 from spreading, and haven’t fallen for any vaccine conspiracy theories. However, getting the coronavirus shot was tremendously stressful for Denley. They feared it could trigger a terrible panic attack, leaving them crumpled on the floor, sobbing and shaking in front of a crowd of onlookers. They were also worried about health care providers dismissing their fears.

“I don’t want to be treated like a child because I have a phobia. I’m not a child, I’m acting like an adult with a phobia,” says Denley. “I don’t believe that vaccines are particularly painful…It’s literally just that for some reason, my brain processes this in a way that is really intense and unexpected.”

Denley struggles with “blood injection injury phobia,” also known as needle phobia. Since they were a child, they’ve experienced debilitating fear when receiving injections. According to studies (also see here, here and here) conducted in different countries, as many as one in four adults have some fear of needles, causing symptoms from butterflies in their stomach to debilitating panic attacks—and one in 10 are so fearful that they refuse vaccination entirely, says Meghan McMurtry, an associate professor of clinical psychology at the University of Guelph in Ontario, Canada.

Needle phobia has long been a public health issue. Sixteen percent of adults avoid flu shots at least partly because they’re afraid of needles, according to a 2019 meta-analysis across multiple countries published in the Journal of Advanced Nursing. But it’s especially salient now, as public health officials strive to vaccinate as many people as possible against COVID-19. Someone who is even mildly nervous about injections may be less likely to get their coronavirus shot—a February study published in the journal Vaccine found that among people who said they were unlikely to get or unsure about getting the COVID-19 vaccine, 12% said that they are afraid of or hate needles.

To help the needle-phobic, McMurtry says that vaccination sites should let people know ahead of time which questions they’ll be asked and what accommodations can be made for them. The site itself should be calm and organized, and people shouldn’t be made to wait on long lines, which could trigger anxiety. Finally, recipients should be vaccinated privately so they don’t have to worry about having an audience.

When administering the shot, providers should encourage patients to do whatever helps them handle the process, McMurtry says. Some may want to watch the needle while others want to turn away, for instance. Distractions like listening to music or using a phone can also be helpful. Providers shouldn’t use language that implies pain, like “here comes the pinch!,” as the shot may hurt more if someone is very tense. However, they also shouldn’t minimize the fact that the shot could hurt.

“You say things like, ‘some people say it pinches for a few short seconds, other people say it doesn’t bother them, but you can tell me what it was like for you afterwards,'” McMurtry says. “So you are basically opening up a space for them to have their own kind of experience.”

For needle phobic people, McMurtry suggests sticking to a plan to guide yourself through the process. Make sure you know how to get to your vaccination site, what you’ll wear the day of your appointment, and how to distract yourself when you’re getting the injection. If possible, get a friend to help plan your appointment, or bring one along on the day of your shot. You can also talk to a doctor about topical anesthetics, which can numb the injection area. People who tend to faint when getting an injection can use muscle tensing practices to keep their blood pressure up. In some cases, exposure therapy—in which phobia sufferers willingly and gradually increase their exposure to their trigger—can work, too.

Friends and family can also help loved ones cope with needle phobia, McMurtry says. Most of all, avoid making anyone feel guilty about their fears—instead, acknowledge that a person’s “fear is real,” and that it’s “not something they should just get over,” she says. When describing their own vaccination experiences, they should avoid talking about the negatives, but rather focus on the positive or neutral parts.

Denley, for one, found it helpful to speak with health care providers about their concerns before their appointment; they were prescribed an anti-anxiety medication and a topical cream. Denley had nightmares leading up to their appointments and repeatedly thought about canceling their Uber to the vaccination site. Nevertheless, they managed to overcome their fear and received both doses of the Pfizer-BioNTech vaccine.

What was particularly helpful, Denley says, was the kindness of a provider who administered the first shot. That kind of understanding attitude may be key to helping the needle phobic among us protect themselves from COVID-19. “Being kind of dismissive or joking about needle fear is likely not helpful…It can feel very invalidating for the individual, and it’s not going to really solve it,” says McMurtry. “We need to support each other through this.” 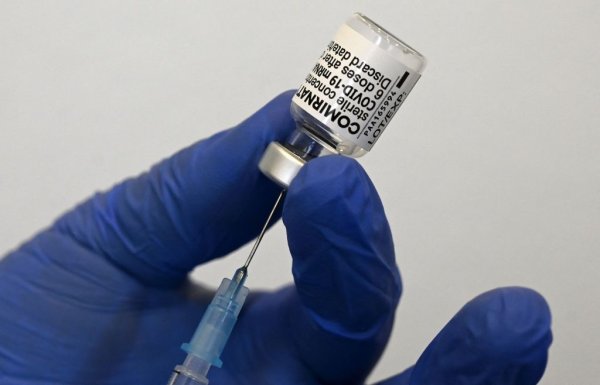 Pfizer-BioNTech Ask FDA for Full Approval of COVID-19 Vaccine
Next Up: Editor's Pick