The surge of COVID-19 cases and the humanitarian crisis now unfolding in India has shocked the world and led to a search for an explanation of how the situation got so bad so fast. Scientists are investigating several factors including new variants and public health officials have pointed to underinvestment in the country’s health system.

Undoubtedly, the causes are varied, and as I watched the numbers surge, I began to wonder whether it’s worth considering the role air pollution may be playing. Since the early days of the pandemic, researchers have understood that exposure to polluted air makes people more vulnerable to COVID-19, and India’s megalopolises are among the most polluted in the world. “We understand that the impact of pandemic can be higher in polluted regions where people’s lungs have already been weakened due to long term exposures,” says Anumita Roychowdhury, executive director of research and advocacy at Centre for Science and Environment in Delhi. “That makes Indian cities vulnerable.”

There’s been some research on air pollution and COVID-19 in India specifically, but it’s probably first worth looking at the bigger picture. A slew of studies have shown direct links between exposure to air pollution and vulnerability to COVID-19. One paper published in December in the journal Cardiovascular Research found that chronic exposure to particulate matter—a type of pollution that results from a mix of chemicals that come from sources like smokestacks and fires—is likely linked to some 15% of global COVID-19 deaths. Particulate matter doesn’t just come from fossil fuels, but the study’s authors found that more than 50% of air pollution-linked COVID-19 deaths are specifically connected to fossil-fuel use.

A seemingly endless stack of studies has shown the causal links that explain this: extended exposure to air pollution contributes to a range of ailments—from asthma to diabetes—that are risk factors for COVID-19.

The research in India is still in early stages, but scientists have already begun to evaluate the local connection. A preliminary study out of Malaviya National Institute of Technology in Jaipur, India found a correlation between COVID-19 cases and air pollution and climatic conditions—like wind and humidity—in Delhi. Another preliminary paper from the World Bank relying on data from India found that a “1 percent increase in long-term exposure to [particulate matter] leads to an increase in COVID-19 deaths by 5.7 percentage points.” The study suggested a range of “urgent” interventions from promoting cleaner fuel sources to reducing pollution in the transportation system that would complement more obvious public health measures like vaccination and mask wearing.

“A scientific consensus seems to be emerging that improving air quality may play an important role in overcoming or at least reducing the impacts of the pandemic,” the authors of the World Bank paper wrote. “Research implies that pollution must be limited as much as possible when lockdowns are lifted.”

This dynamic is important to understand not only because it helps explain one factor that has worsened the pandemic, but also because it offers a lens into so-called “climate co-benefits”—a key consideration that helps make the case for urgent action on climate change. That term refers to the positive effects beyond carbon dioxide emissions reduction that result from tackling climate change. Co-benefits range from improved soil health (resulting from agricultural practices that reduce carbon emissions) to improved energy security (as a positive outcome of expanding renewable energy sources and reducing reliance on fossil fuel imports).

But perhaps no co-benefit is more significant—and more urgent—on a global level than the clean air that results from nixing fossil fuels. In India, for example, chronic exposure to air pollution causes the premature death of more than a million people each year. Hundreds of thousands more are similarly affected in China. Even in the U.S., which has relatively strict environmental standards, more than 100,000 people have been estimated to die prematurely due to particulate matter air pollution every year, according to research published in the Proceedings of the National Academy of Sciences. And, in the U.S. and around the world, the burden falls disproportionately on low-income communities of color.

Policymakers and scientists have had many a thorny debate about the best ways to account for those co-benefits, but on a purely human level it’s another example of how tackling climate change would save lives—not just 30 years in the future but right now. 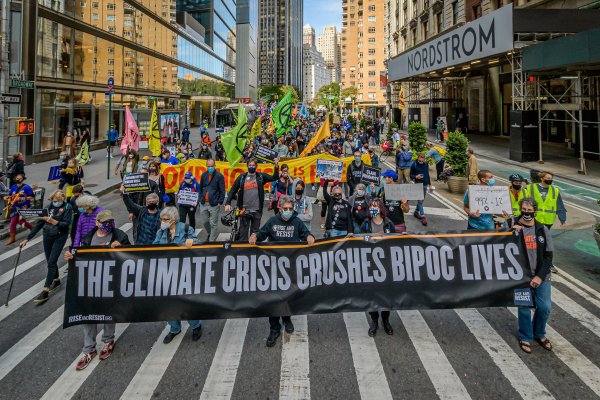