What We Can Learn From the Last Time the U.K. Held Elections During a Pandemic

This May, English, Scottish and Welsh voters go to the polls in the first U.K. elections held during a pandemic since 1918. That year, amid an influenza epidemic which claimed the lives of tens of millions globally, David Lloyd George led his coalition government to a crushing victory in mainland Britain, while Sinn Féin swept the board in what was soon to become the Irish Free State.

Like the 2021 elections, the 1918 general election, held a month after the Armistice on Dec. 14, had been long postponed. By the end of the First World War, MPs had not “gone to the country” for eight years. The arguments for holding an election were straightforward: not only did the government wish to seek a fresh mandate before heading into the peace negotiations, but the new electorate—including, for the first time, millions of women—clearly deserved a say in the direction of peacetime reconstruction.

But the arguments against holding it were strong. The electoral registers were in a poor shape, the consequence of wartime neglect and the enormous expansion of the electorate following the 1918 Representation of the People Act. The nation still suffered from wartime privations, while hundreds of thousands of soldiers and sailors remained overseas. The public mood was not one for reasoned political debate: not for nothing has this been called the “atrocity” election, with candidates vying to prove that they were the most “anti-German” choice. And behind it all hung the deadliest pandemic anyone alive had ever known.

The winter of 1918 corresponded with the second and most devastating of the waves of “Spanish” influenza that struck the U.K. during 1918-19. Estimates place the combined death toll for October, November and December at around 100,000 individuals. Britain, along with much of the world, experienced what the historian Niall Johnson describes as “massive disruption of normal life with transport networks, communications … and all forms of social and economic activity interrupted, impaired or stopped due to the spectacular levels of both illness and death.” As the election approached, Christmas shoppers searching for the most popular children’s gift—a toy tank—faced long queues as shop staff, depleted in numbers, struggled to serve them. After they visited the polls on that showery winter Saturday, voters deciding to spend their afternoon at the cinema may have been treated to a Local Government Board film recommending the wearing of face masks.

Across the U.K., and especially in the north of England, influenza seriously disrupted election activities. With so many staff sick, the Post Office struggled to deliver election material on top of the demands of the Christmas post. Door-to-door campaigning and public meetings were abandoned in Grimsby (following 59 deaths in a week), South Shields and Sunderland. Political parties in these areas also dispensed with the use of vehicles to transport voters to polling stations. Writing of the situation in Manchester, one journalist observed: “Influenza is rampant, doctors are overworked, and the wise are keeping away from election meetings.”

Traveling up and down the country to speak to voters in poorly ventilated venues, candidates were especially exposed. By the end of the campaign dozens were bedridden, bringing an early end to campaigning in many places; one constituency in Hull saw all of its candidates incapacitated at the same time. At Dundee, one of Winston Churchill’s opponents withdrew following a bout of flu; the Conservative leader and Chancellor of the Exchequer Andrew Bonar Law was laid up with a fever during the last week of the campaign; Lloyd George had been feared close to death in September.

On Dec. 8, the private secretary to the government chief whip died of complications following influenza. At least one candidate also died during the campaign: Colonel Lucas, the Conservative candidate for Kennington, succumbed to heart failure on Dec. 11 following infection. His widow Alice subsequently stood in the re-scheduled election, becoming the first ever Conservative woman parliamentary candidate.

For a columnist at the Globe, it was “the influenza election which nobody wanted.” All over the country, tens of thousands of voters were reported to be too ill to head to their polling stations. The turnout, the lowest of any modern British general election, appears to bear this out.

Yet it is remarkable how little the pandemic featured as an election issue. It was rarely mentioned by candidates, nor did it receive much attention from the government. Unlike in the U.S., where disinfectant had been on hand in many polling booths during the November mid-term elections, there seems to have been few or no official precautions taken at British polling stations.

Placed in the wider context of December 1918, however, this lack of attention is more understandable. Salient issues in Britain remained those of revenge against Germany, demobilization and reconstruction, while in Ireland the prospect of a Sinn Féin landslide distracted from all other subjects. Influenza was only one of the many challenges faced by the electoral administrators, who struggled heroically against the material and logistical shortages imposed by a wartime economy. In some places, empty artillery shell casings were repurposed to make up for a chronic shortage of ballot boxes, the consequence of a much larger electorate. Other novelties included postal votes for the soldiers still in France. In stark contrast to 2021, the 1918 pandemic was simply one element of the political landscape and for most, regardless of the human cost, it was a relatively unimportant element at that.

The 1918 general election was called by Lloyd George to take advantage of public feeling at end of the war. It was, argues the historian Martin Farr, a “cynical muddle,” which probably should never have taken place. Nevertheless, in its own way it offers a snapshot of the nation at a unique moment of change and transition. Whether or not the 2021 polls should have been postponed divides opinion. What is certain is that, as in 1918, the 2021 elections will provide a picture of a country at an extraordinary moment in its collective story.

Peter Keeling holds a PhD in modern British history from the University of Kent. 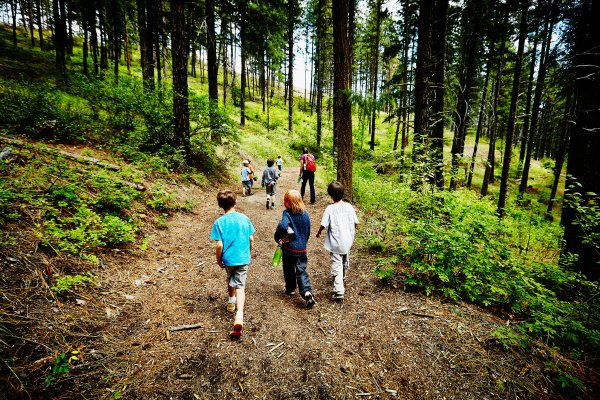 Why America's Kids Need Free Camp This Summer
Next Up: Editor's Pick