On Monday, the U.S. Supreme Court unanimously ruled that people imprisoned for possessing small amounts of crack cocaine before 2010 are not eligible for reduced sentences under the 2018 First Step Act. The case, Terry v. United States, had drawn a bipartisan coalition of Senators, attorneys general and advocacy groups to weigh in, urging the highest court to extend relief to low level offenders.

The petitioner in the case, 33-year-old Tarahrick Terry, was sentenced to 15.5 years in prison after he pleaded guilty in 2008 to possessing 3.9 grams of crack cocaine. He petitioned for a reduced sentence in 2019 under the First Step Act—which Congress had passed a year earlier in an attempt to redress racially discriminatory sentencing laws of the 1980s—but was denied by the Atlanta-based 11th U.S. Circuit Court of Appeals. On Monday, the Supreme Court agreed with that denial. Justice Clarence Thomas wrote the majority opinion, with Justice Sonia Sotomayor partially dissenting.

The circuit court had ruled that the First Step Act only covered high and mid-level crack offenders—not low-level ones like Terry. Judges in the Third, Sixth and Tenth Circuits have ruled the same in similar cases, but judges in the First and Fourth Circuits have disagreed. “This circuit split is untenable,” Terry’s legal team had argued in his petition, pointing out “geography alone now determines” whether “countless” people serving low-level crack cocaine convictions could apply for sentence reduction.

Portions of the First Step Act of 2018 took aim at the Anti-Drug Abuse Acts of 1986, which established the infamous 100-to-1 powder to crack cocaine ratio—meaning possession of 500 grams of powder cocaine brought a comparable sentence to the mandatory minimum for 5 grams of crack. (Crack and powder cocaine are derived from the same chemicals, but crack cocaine is processed with additives that make it a solid “rock” shape.)

The laws furthered mass incarceration and disproportionately impacted impoverished people and people of color—community groups often overpoliced to begin with—as crack cocaine has historically been more accessible to poorer Americans. A 2019 Asbury Park Press and USA Today Network study of nationwide arrest records and federal drug convictions found that a majority of crack users in the U.S. have historically been white, yet Black Americans were sent to federal prison nearly seven times more often for crack offenses from 1991 to 2016.

Read more: Want to Win the War on Drugs? Portugal Might Have the Answer

In 2010, Congress passed the Fair Sentencing Act and raised the amounts an individual needed to be charged with possessing to qualify for tier A sentencing from 50 grams and above to 280 grams and above, and B tier from between 5 and 50 grams to between 28 and 280 grams. (In essence, this reduced the disparity between crack and powder cocaine possession charges from 100-to-1 to 18-to-1, but did not eliminate it entirely.)

The Act wasn’t retroactive, however, meaning many people sentenced between 1986 and 2010 under more punitive laws remained in prison serving disproportionately long sentences. Congress attempted to remedy this blind spot in 2018 by including a provision in the First Step Act that extended the Fair Sentencing Act to people sentenced before 2010. Once former President Trump signed the bill into law, people who had been sentenced for crack cocaine possession in tier A or tier B became able to apply for a reduced sentence.

But because the Fair Sentencing Act never actually mentioned tier C, it had remained a matter of legal dispute as to whether the First Step Act also extended relief to people like Terry, who was sentenced at that tier. In other words, Terry vs. United States asked whether people who were arrested before 2010 carrying the smallest amounts of crack cocaine should be allowed to apply for sentencing relief akin to people who were caught carrying much larger amounts. On Monday, the Supreme Court ruled that they cannot.

In her opinion, Justice Sotomayor called for Congress to address the discrepancy, which she described as “no small injustice.”

“There is no apparent reason that career offenders… should be left to serve out sentences that were unduly influenced by the 100-to-1 ratio,” she continued. “Unfortunately, the text will not bear that reading. Fortunately, Congress has numerous tools to right this injustice.”

Like the First Step Act itself, Terry’s petition had garnered a bipartisan coalition of support. Four lead sponsors of the First Step Act in the Senate—Republicans Sen. Chuck Grassley and Sen. Mike Lee and Democrats Sen. Dick Durbin and Sen. Cory Booker—had filed a brief in his favor. “Had Congress intended to exclude individuals with low-level crack cocaine offenses from relief, Congress of course could have done so,” the Senators wrote.

The ACLU and the NAACP Legal Defense and Education Fund filed a brief disagreeing with the 11th Circuit, arguing that granting low level offenders eligibility for sentencing reduction furthers Congress’s goal of “correcting the long-recognized and widely criticized racial disparities caused by the crack powder differential.” And conservative groups like the American Conservative Union, the Cato Institute and Americans For Prosperity Foundation—which has the backing of Republican mega-donor Charles Koch—had also filed briefs urging the court to grant him eligibility.

“We’re undergoing a mass rethinking of drug policy and sentencing policy in the country. And this case is an important part of that rethinking,” Vikrant Reddy, a senior fellow at the Charles Koch Institute who consulted on the Americans for Prosperity Foundation brief, told TIME in May.

When the Supreme Court first took up the case in 2020, the Trump Administration’s Justice Department argued that Terry and other tier C offenders didn’t qualify for re-sentencing. But on March 15 the Biden Administration reversed that position. Arguments were rescheduled in response, which is why the case was heard in May, even though oral arguments usually end in April.

“[Terry] has never had a chance to ask for a sentence that reflects today’s understanding of the lesser severity of his crime,” Sotoamyor added near the end of her opinion on Monday. “Absent action from the political branches, he never will.” 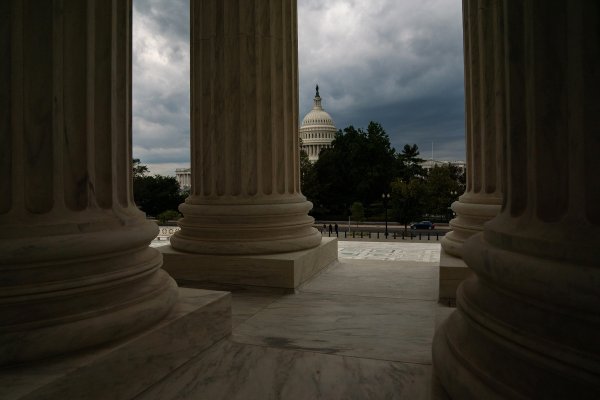