Well hello! I’m so glad you’re here. A version of this article also appeared in the It’s Not Just You newsletter. Sign up here to receive a new edition every Sunday.

Forest ecologist Suzanne Simard studies what she calls “mother trees.” They are tall old-growth trees with vast root systems connected to hundreds of other trees via a network of fungi that allows them to share resources and information. Mother trees are the source of a forest’s resilience and renewal in the face of modern stressors, like climate change.

This breakthrough research revealed stunningly complex communications and cooperation among trees. A mother tree can even recognize its own saplings and direct more carbon, nutrients, and water to them if needed, but will also support other neighbor trees in distress.

Simard’s work led to a revolutionary premise: that the forest is a bit like a mutual aid society. “I discovered that [the trees] are in a web of interdependence, linked by a system of underground channels, where they perceive and connect and relate with an ancient intricacy and wisdom,” she writes in her new book, Finding the Mother Tree: Discovering the Wisdom of the Forest.

I’ve been thinking about those wise old trees as Mother’s Day approaches in this, the second spring of the pandemic.

The discovery of an invisible but essential network we didn’t appreciate until it was under threat, sure is resonant right these days. We now know much our economy and our sanity depend on the emotional, intellectual and physical labor of the nurturers, caregivers, and organizers that have been both our nation’s emergency backup system and the everyday infrastructure. They may not all be mothers or women, but they’re our mother trees.

Start with healthcare workers, 76% of whom are women, like the frontline nurses who withstood endless shifts exhausting their bodies and hearts in the battle against COVID-19. And there are the armies of women who’ve set up neighborhood food banks and nutrition programs with star chefs like Jose Andres–nurturers all. And the mother trees bound by tragedy, like Gwen Carr and Sybrina Fulton, who showed up for the family of George Floyd.

Subscribe here to get an essay from Susanna in your mailbox every Sunday.

My corner of the world is full of magnificent mother trees–mentors and ralliers of empathy like Shelly Tygielski, the founder of Pandemic of Love, a grassroots organization with thousands of mother trees directing resources of food, funds, and connection to those that need it most.

And there’s my friend Connie who is the lead clinician of a program that helps families dealing with abuse and domestic violence, a mission rendered infinitely more difficult with record unemployment and stay-at-home home orders amping up stress levels.

And there are so many friends who are essential hubs for their family and friend groups. Their to-do lists are part errands, part emotional labor. They have an uncanny ability to send a text or a card, or a jar of confetti at just the right time, small gestures of grace that can lift someone out of terrible sadness.

Building those networks of care is a learned skill in and out of the forest. And when that generational chain of knowledge is disrupted, mother trees like Isis Sapp-Grant have stepped in. A social worker by training, she founded the first community-based diversion and alternative to incarceration program in New York state specifically designed—in terms of culture and identity—for Black girls and other girls of color. In the early 2000s, the Brooklyn-based Blossom program became an after-school haven offering mentorship and a safe and nurturing space to grow.

Many of those girls are now grown with jobs and kids of their own. But they’ve maintained the support system they formed at Blossom. Former mentors are now friends and godmothers to their children. “These women still rely on each other. And I still spend hours talking with them,” says Sapp-Grant. “The conversations now are around breaking cycles when you come from trauma. How do I raise my kids differently?” There’s no easy answer, but they have a community bank of wisdom to draw on.

In one of Simard’s TED Talks, she describes both the interdependence of trees and a battle with cancer that interrupted her work. She talked about how she came to depend on a group of women who’d been through the same challenges:

All this is to say, happy Mother’s Day to all you mother trees who’ve shown up for your families, your communities, your country this year. I know you’re tired. You’ve held up more than half the sky for too long. It’s time for reinforcements.

If you’re new to It’s Not Just You, subscribe here to receive an essay every Sunday.

Road Trip Update! Thanks to all of you for the good wishes and kind invitations for my cross-country voyage. I’m flipping the script a little bit. Dog and I will now be traveling West to East at the end of May, and I’ll be posting from the road on Instagram @SusannaSchrobs

When Pandemic of Love was introduced to John from Baltimore, in April, he was living on the streets. Months earlier, his family, most of his friends, and his community cut John off when he revealed he was gay. John went into survival mode, eventually running out of funds for hotel stays, losing his job, and entering a major depression. He started to believe that God didn’t love him and his life was cursed.

One night, while panhandling near the baseball stadium, someone suggested he reach out to Pandemic of Love. Within two days, POL volunteers on the ground were able to get John into a hotel, then into secure housing, raise over $4.5k for him, offer him employment and purchase a new laptop for him.

Adam, a local volunteer, who is gay, read John’s story and jumped in to help John financially and also as a mentor. He connected John to a community of individuals with similarly devastating stories about coming. Recently the two had dinner, and John marveled at the transformative generosity he’d encountered:

Adam (left) and John are pictured above. John’s face is blurred for privacy. Story and images courtesy of Shelly Tygielski, founder of Pandemic of Love, a grassroots organization that matches volunteers, donors, and those in need.

Our weekly acknowledgment of the animals that help us make it through the storm. “This is Mash, super cool dog. Nuff said,” says Jules who submitted the photo below as evidence.

Did someone forward you this newsletter? SUBSCRIBE to It’s Not Just You here. 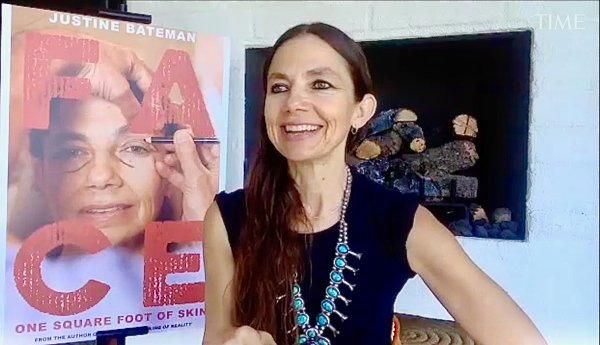 Watch: Justine Bateman on the Reaction to Her Book and Why Fear of Aging Is Worse Than Looking Older
Next Up: Editor's Pick