There are a few things that pester political pros, regardless of political party. The media’s fixation on debate performances, a function that has absolutely nothing to do with the actual job as an elected official. The expectation-setting for end-of-quarter fundraising that ignores the actual overhead needs. The obsession over how many supporters’ email addresses are in the campaign database, as though that corresponds to the clout inside a caucus.

None, however, irks insiders in a presidential operation like the 100-Day contest. FDR more or less screwed over every one of his successors when he laid down the marker in 1933, saying he’d launch a New Deal agenda to end the Great Depression in that short window. From that point forward, every President has at once tried to match the expectations of the moment when an administration hits the 100-day mark and tried to reject what is — truly — an arbitrary barometer of a Presidency.

Well, Joe Biden hit his 100 days yesterday. He used his first turn before a joint session of Congress this week to preach a sermon of accomplishment and dangle the prospects of a sequel. But when it came time to actually toast the occasion, he did what no President before him had done. He staged a drive-in rally.

That’s right. Even with the tide seeming to turn against the pandemic in the U.S., Biden doesn’t have a lot of options on how he can mix with his supporters. There are still more than 50,000 new cases every day; a mass rally without social distancing only begs trouble. So he did the next best thing. In Duluth, Ga., Biden’s supporters brought their pickups and minivans to the parking lot of an arena complex for an abbreviated version of what he told Congress.

Arbitrary or no, the split screen between Biden at 100 Days and his predecessors was telling of the fundamentally changed country we’re living in at this moment. When Donald Trump hit the marker, he was in Harrisburg, Pa., for a rally that doubled as counter-programming for the White House Correspondents Association black-tie dinner. Barack Obama scheduled a prime-time news conference — an event Biden still hasn’t attempted. George W. Bush’s 100th day fell on a Sunday, so he followed up the next day with a lunch with Congressional leaders. Bill Clinton used his to thank members of Hillary Clinton’s health care task force, which ultimately proved a failure.

Biden doesn’t have the same luxury. He’s finding himself boxed in on what he can do, much the way he found himself during a pandemic-leveled campaign. Even at the end of his rally, his instincts kicked in to connect with supporters. Try as he could to reach across the twin rows of bike racks that separated him from the crowd , he just couldn’t manage the one-on-one interactions that were a hallmark of his pre-pandemic campaign.

It’s not just Biden navigating these challenges in the pandemic’s twilight. Bon Jovi, Grace Potter and Travis Tritt are heading on tour as such this summer for at least some dates. And countless high school graduations are still being lit by the minivan’s high-beams for a second time in as many years this spring. As much as his critics mocked Biden’s choice to keep his events in parking lots for now, he might have found a format that has resonance that Washington simply doesn’t understand.

Upon finishing his 22-minute remarks in Georgia, Biden found himself in a spot familiar to most people watching: he misplaced his mask. “I’m looking for my mask. I’m in trouble,” Biden said as he poked around the podium with the help of his wife. Finding none, Biden’s personal aide Stephen Goepfert brought a spare one to the stage. That gig used to require a bag with sharpies and cough drops. The fact that it now requires carrying extra PPE for the President is yet another reminder that Biden’s first 100 days, like his next, will be like none other. 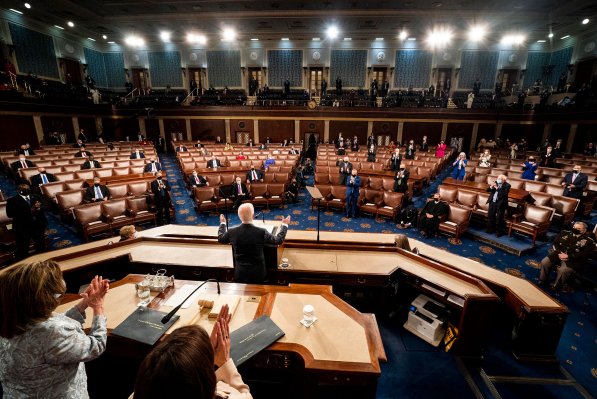 Biden Reaches the Summit of American Power in a Way Never Imagined
Next Up: Editor's Pick