Watching the Sochi Olympics opening ceremony could at times feel like going to the party of someone you barely knew. We were guests, but it wasn’t really about us. The ceremony, in a way like this whole Olympics, felt like a story Russia was telling the world, but most of all a story it was telling itself, about a vital, proud, storied country on the rise–and don’t worry too much about those Stalinist-purge and gay-repression things.

It began with a Russian girl’s Wonderland trip through the Cyrillic alphabet. (Why are so many Olympic opening ceremonies highly stylized children’s nightmares?) It ended with a highly selective trip through Russian history. On the way it passed troikas of horses, cosmonauts, and War and Peace. This ceremony was so thoroughly Russian you could keep it in your freezer and pour shots of it.

And its version of Russian history, especially in the 20th century, was so smoothed over you could skate on it. While the visually stunning pastiche of Russian history represented the 1917 revolution–a red locomotive amid constructivist art–it skipped over the bloody excesses of Stalinist Russia in favor of a bit of World War II and a whole lot of Soviet ’50s teenyboppers. The turbulent recent history, perestroika, the dissolution of the Soviet Union, Russia’s lurches toward and away from democracy, were summed up by a girl letting go of a red balloon.

Of course, it was Vladimir Putin’s show, and it’s no surprise the host country would try to cast itself in an optimistic light. It was up to the broadcasters of NBC to put this fantasia in a frame of reality. That was ostensibly the point, after all, in making the ceremony the only part of the Olympics NBC would not livestream online. (The real reason, more likely, was primetime ratings.) The ceremony, we were told, needed NBC’s journalists to put it in proper context.

And often they did. Bob Costas, still suffering from an uncomfortable-looking and uncomfortable-to-look-at case of pinkeye, kicked off the evening interviewing President Obama about relations with Russia: Were they turning for the worse? Was Putin an ally or antagonist? What was the U.S. doing to protest Russia’s restrictive laws on homosexuality? It was also a very smart move to hire as a commentator The New Yorker’s David Remnick, who has written extensively about the country and talked about the tensions the ceremony was embodying–for instance, modern Russians’ conflicted feelings about the Soviet past. “This is highly idealized,” Remnick noted dryly, as The Great Patriotic War (WWII) quickly dissolved into a sockhop with cosmonauts.

But NBC, like the host country, also had to balance history with entertainment, news with spectacle–and, as in London two summers ago, the balance most often crashed to Earth in the color commentary, with Matt Lauer and Meredith Vieira, reading factoids listlessly and reassuring their audience that, don’t worry, all these countries were overwhelming to them too! At one point, Vieira explained that the Parade of Nations was organized by alphabetical order in Cyrillic, the Russian alphabet: “If you need more information, Google it!” Later in the parade, Lauer explained that “YOLO” stands for “You Only Live Once.” Context! (The most striking thing in the parade, as in London, was the number of athletes squinting into rectangles, shooting selfies and smartphone video.)

“It’s often impossible to separate the Olympics from politics,” Vieira said, here more than many places. But when it was possible to, the ceremony was often strikingly gorgeous. The designers of the spectacle did wondrous things with light, in particular a Swan Lake ballet sequence in which the dancers wore glowing blue strands that made them look like graceful jellyfish. (Unfortunately, NBC edited out parts, like, reportedly, an anti-bias statement by from the IOC president, not to mention a weird, fanciful segment with the Olympic mascots–a bear, a hare, and a snow leopard.) The biggest hitch was a symbolic doozy: one of the five snowflakes meant to expand into the Olympic rings was stuck, as if placing an asterisk on Sochi.

And of course, it ended with the Olympic flame: a Firebird-inspired torch lighting a row of flame jets that burst into flame at the cauldron. Kicking off two weeks of Olympics coverage that will need to cover the spectacle without being blinded by the gorgeous lights.

(MORE: Day 2 at the Sochi Games: From women’s snowboard slopestyle to men’s skiathlon) 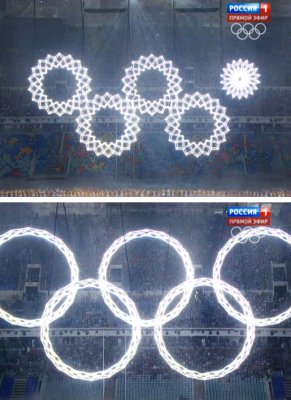