Shelters From Reynosa to Tijuana Are at Capacity and Scrambling for Resources as the U.S. Continues to Expel Migrants

It’s bustling and noisy inside Iglesia Embajadores de Jesus (Ambassadors of Jesus Church) on a Saturday in late April. Nestled in the remote hills of Tijuana, migrants who are mostly from Central America have been able to find shelter here, sleeping on gray and blue mats laid out on the floor where church service usually takes place. Dozens of small children stay close to their parents. Some of them play outdoors with construction rubble. Many people are missing their shoelaces.

This is one of the more resourced shelters, says Erika Pinheiro, policy and litigation director at Al Otro Lado, a legal and humanitarian aid organization who hosts seminars at the shelter to explain U.S. immigration policy. While there are several shelters throughout Tijuana with nicer amenities, there are even more with less than Embajadores. Some are just concrete walls with tents pitched inside. At Embajadores, they have electricity and running water.

Along the nearly 2,000-mile stretch of the U.S.-Mexico border, shelters like this are at capacity and scrambling for resources. In Ciudad Juárez, across the border from El Paso, Texas, the San Juan Apóstol shelter for vulnerable and pregnant migrant women now has hundreds of people on a waitlist. In Reynosa, across the border form McAllen, Texas, a makeshift encampment has formed in downtown and grown to about 700 people because shelters have run out of room. As a result, a nonprofit that provides education for migrant children stranded in Mexico called The Sidewalk School has started to house 26 families and two single adult men in apartments. Many organizations and local church leaders in Mexican border cities have partnered to shelter whomever they can, sometimes with aid from American organizations like Al Otro Lado.

“People don’t understand these are U.S. asylum seekers,” Felicia Rangel-Sompanaro, co-founder of The Sidewalk School says. “These people belong to us, and we’re doing this to them.”

It’s a situation several years in the making, mostly the result of a Trump-era rule that has stayed in place under the Biden Administration called Title 42, which states all unauthorized immigrants will be immediately “expelled” from the U.S., mostly to Mexico, in order to prevent the spread of COVID-19. It has been compounded by more than two months of the Biden Administration flying expelled migrants to other parts of U.S.-Mexico border, and years of Trump’s Migrant Protection Protocols (MPP), also known as “Remain in Mexico,” which was implemented in 2019.

People ‘don’t even know what country they’re in’

Most migrants are attempting to enter the U.S. through Texas’ Rio Grande Valley, but the bordering state of Tamaulipas has for months been restricting who it will take back. On March 8, U.S. Customs and Border Protection (CBP) began flying migrants to San Diego and El Paso, and then expelling them from there. Many of the migrants are not told they will be expelled, according to Pinheiro, other aid workers, and some of the migrants who spoke to TIME. Some are led to believe they’ll be flown to another state to be able to make their claim for asylum, but are instead released in Mexico. “It’s cruel,” Pinheiro says. “They’re telling people they’re going to be paroled into the United States, and then they dump them off in Mexico. We’ve met people at [Embajadores] that don’t even know what country they’re in.”

Over the course of nine weeks, over 110 of these types of flights took place, potentially expelling thousands of people, according to Witness at the Border, a coalition of volunteers who analyze flight data to track deportations, data that is not made available by the government. The Department of Homeland Security (DHS) did not provide data requested by TIME, but a spokesperson for the agency said needs are assessed daily. “Flights were discontinued based on those operational needs,” DHS says. “The government, however, reserves the right to restart the lateral flights if it deems the circumstances warrant.”

The last of these lateral flights took place on May 7, according to Tom Cartwright, one of the coalition’s members, the result of negotiations between the Biden Administration and the ACLU, which has an ongoing lawsuit against the Administration for the use of Title 42. Overall, since January, the U.S. government has conducted more than 515,600 expulsions. In April, CBP told reporters that 28% of individual adult expulsions that took place in March affected people who had already been expelled once before, meaning many people have tried more than once to enter into the U.S. Under Title 42, most people are expelled without being permitted to make a claim for asylum, an international right.

When migrants are taken into CBP custody, their shoelaces, belts and other possessions are confiscated. When they are expelled, CBP does not return the shoelaces, making migrants easily identifiable on the streets of Mexican border cities notorious for crime. Nonprofit advocacy and research organization Human Rights First has documented nearly 500 instances of attacks and kidnappings of asylum seekers and migrants in Mexico since the start of the Biden Administration. During the course of a weekend in April, the co-founders of The Sidewalk School, Rangel-Samponaro and Victor Cavazos, handed out dozens of shoelaces to migrants living at Embajadores.

However, not all of the people living in migrant shelters in northern Mexico are there because of Title 42. Since the start of the Biden Administration about 8,300 asylum seekers have been processed into the U.S. as of the end of April 2021 after waiting in Mexico under MPP according to Transactional Records Access Clearinghouse (TRAC) at Syracuse University. About 18,000 people are still waiting in Mexico to be processed into the U.S. since the Biden Administration ended MPP in January, according to TRAC.

“MPP is over, but Title 42 basically creates the same issue,” says Karina Breceda, shelter coordinator at San Juan Apóstol in Juárez. In the two years that MPP was in place, makeshift tent encampments formed in Mexican border cities, the largest of which was in Matamoros, across the border from Brownsville, Texas. Though Title 42 has been in place since March 2020, unauthorized migration or attempts to seek asylum largely tapered off for much of 2020, which some immigration experts believe was because of the COVID-19 pandemic. Towards the end of 2020, CBP began to see apprehensions at the border rise again, and then increase at a rapid rate when the Biden Administration began. With Title 42 still in place, thousands of migrants began living on the streets of the Mexican cities to which they were expelled, filling up shelters and forming tent encampments in Reynosa and again in Juárez and Tijuana.

Aerial view of an improvised migrants and asylum seekers camp outside El Chaparral crossing port as they wait for U.S. authorities to allow them to start their migration process in Tijuana on May 9, 2021.
Guillermo Arias—AFP/Getty Images

Many of the systems put in place to take care of migrants stranded in northern Mexico couldn’t keep up with the rapid rate of expulsions, both Breceda and Pinheiro say. For example, in Juárez in 2020, organizations banded together to quarantine migrants at a local hotel for two weeks before they could be placed in a shelter in order to prevent the spread of COVID-19. Organizations in Tijuana had established a similar system. But with the rapid rate of expulsions, it became impossible to quarantine all migrants, and some shelter coordinators began taking in people even if they hadn’t quarantined or taken a COVID-19 test. Embajadores is one such shelter. The pastor who runs Embajadores is the type of man who won’t turn anyone away, Pinheiro says.

San Juan Apóstol, on the other hand, is currently limiting capacity to try to allow for social distancing. Though the shelter can house up to 40 people, it is currently housing 12. “Our current capacity doesn’t reflect the needs of the city,” Breceda says.

Mexico’s is vaccinating its population against COVID-19 at a rate much slower than the U.S. According to data by Johns Hopkins University 8.35% of the population has been fully vaccinated. By comparison, the U.S.’s fully vaccinated population is 38.2%. According to the U.S. Centers for Disease Control and Prevention, Mexico ranks at Level 4, the highest a country can rank, for very high risk of COVID-19.

As shelter coordinators contend with Title 42 expulsions and the aftermath of MPP, they are also seeing new arrivals who are hoping to make a claim for asylum in the U.S., mostly from Central America. While walking through Embajadores, one man, Daniel, a 30-year-old father from Honduras, approached to ask a few questions about what he and his family should do next. (TIME agreed not to share Daniel’s last name because of how frequently migrants are targeted in border cities.) He, his wife and three young kids had just arrived at the shelter the day before after taking a bus for three days.

“Life is really hard in my country,” he says. “I want to claim asylum for my kids, and a better life for them.” Daniel says he hadn’t yet attempted to cross the border because he was hoping to speak to an American lawyer or nonprofit first. Up until our conversation he had never heard of Title 42 and shook his head when asked if he kept up with news from the White House. He adds that he heard of MPP in passing though.

“I still have hope,” Daniel says. “I think we can figure this out.” In the meantime, he says he’s grateful his family has a roof over their heads and a place to sleep. 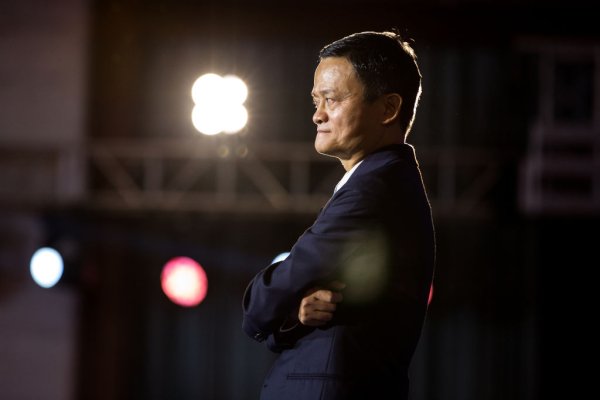 How China Is Cracking Down on Tech Titans
Next Up: Editor's Pick