New York Mayor Bill de Blasio stood up Friday for his city’s airports after Vice President Joe Biden said LaGuardia Airport could be confused for one in a third-world country.

“Not his finest moment,” the newly-elected Democratic mayor said Friday when asked about Biden’s comments.

“I respect the vice president but I think his comments were inappropriate,” de Blasio told reporters at a news conference. “LaGuardia, obviously, needs an upgrade. But that being said, the airport manages an extraordinary amount of traffic, and the people who work there make it work under very difficult circumstances and so as a proud New Yorker, I didn’t like that comment and I think it was not the right way to talk about it.”

Lamenting the United States’ decaying infrastructure during an event Thursday in Philadelphia, Biden said: “If I blindfolded someone and took them at two in the morning into the airport in Hong Kong and said, ‘where do you think you are,’ they’d say, ‘this must be America, it’s a modern airport.’ If I took you and blindfolded you and took you to LaGuardia Airport in New York, you must think, ‘I must be in some third-world country.'”

De Blasio on Friday defended the airport’s employees. His ties to former Secretary of State and potential 2016 candidate Hillary Clinton, for whom he worked as Senate campaign manager in 2000, could be coloring de Blaio’s strong rebuke of Biden. Former President Bill Clinton presided at de Blasio’s inauguration earlier this year. Biden is flirting with his own bid for the Oval Office, telling CNN this week that he will make a decision next year. 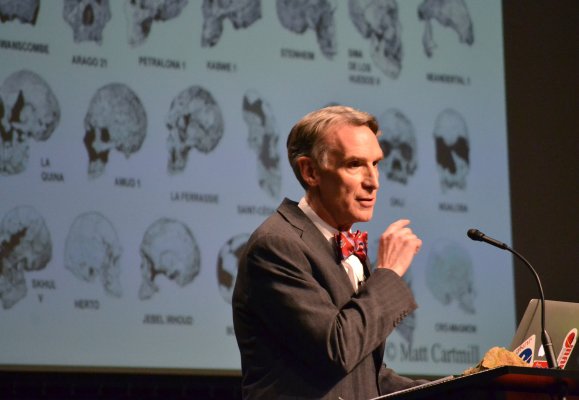 What You Missed While Not Watching the Bill Nye and Ken Ham Creation Debate
Next Up: Editor's Pick