Changing the world, a few hundred calories at a time!

Olive Garden customers have spoken, and the struggling casual dining chain, understandably concerned about losing some of its most loyal patrons, has listened. A few weeks ago, Olive Garden revamped its menu and eliminated a few items, including the braised beef and tortelloni. The cruel move was just too much for fans of the dish to stomach, so customers took to social media and complained directly to Olive Garden’s guest relations department to demand the item’s return to the menu.

All the effort involved in taking a minute to post an online grievance has apparently paid off. As the Orlando Sentinel reported, braised beef and tortelloni will be back on Olive Garden menus come June, likely out of fear of alienating chain restaurant customers who “are so passionate about a particular item they won’t frequent a place anymore if their favorite gets taken off the menu.”

In fact, that’s almost exactly what one exclamation-point-overusing customer wrote on the Olive Garden Facebook page this week:

While it’s rare for restaurants to change menus based on customer comments on social media, it’s not unprecedented. For years, companies have been advised of the wisdom of paying close attention to customer complaints posted online. Consequently, consumers, who understand that companies are more likely nowadays to be watching and taking comments to heart, have more reason to make their requests public. The tactic can work. A campaign kicked off on Twitter, for instance, eventually resulted in Chipotle’s decision last fall to remove pork from its pinto beans. And yes, there’s a very good chance fast food companies have been examining the Reddit thread started last summer that asked what cancelled fast food menu items they’d love to see come back.

Beyond appeasing customers and/or quieting complaints, restaurants may bring back menu items to tap into nostalgia. They’re playing on the fond memories of what people ate as kids, and they’re taking advantage of the curious automatic heightening of demand for anything that’s been gone or will only be available for a “limited time only.” All of this factors into why the McDonald’s McRib, an item that has a cult following and multiple Facebook pages dedicated to it, resurfaces on menus regularly around the country.

Nostalgia is also clearly a big reason why KFC relaunched the Chicken Little Sandwich two years ago, some two decades after the item had disappeared from menus nationally. The problem is that KFC messed with the formula: The new Little is markedly different from the original, and fans who remember eating Littles as kids haven’t been happy. “A lot of people with fond memories of the Cosby-era Chicken Little have already registered disappointment with what KFC is calling the new and improved version,” the Serious Eats blog noted, referring to the new sandwich as a “misappropriation of the Chicken Little’s good name.”

Inevitably, a Bring Back KFC’s Chicken Little Facebook page was launched soon after KFC brought back the Chicken Little—or rather, introduced a warped new version of the Little, as fans of the original might say.

Likewise, McDonald’s customers have launched Facebook pages for bringing back items like the Reese’s Peanut Butter Cup McFlurry. At least in that case, the item did indeed come back to menus, though it’s unclear to what extent, if at all, the social media campaign had an impact.

Online petition sites such as Change.org host hundreds of signature gatherings aimed at influencing fast food companies. Many petitions focus on improving conditions for employees and banning inhumane treatment of animals. And yes, some focus on bringing back discontinued menu items, like the recent campaign to return McDonald’s hot mustard as a dipping sauce. Often, support for these campaigns is offered with a wink and a nod, as seen in one commenter’s Patrick Henry-like post:

(MORE: Wendy’s Ingenious Plan to Get You to Buy More Burgers)

In at least one case, a quick-service restaurant favorite is taking a proactive approach to using social media to gather customer opinions about bringing menu items back from the dead. Tim Hortons is celebrating its 50th anniversary this year by asking customers to vote online for the menu item they’d like to see return. There’s a choice of five—one from each decade the coffee-and-donuts specialist has been in business—and the winner, announced in May, will be back on Tim Hortons’ menus by the end of the year. 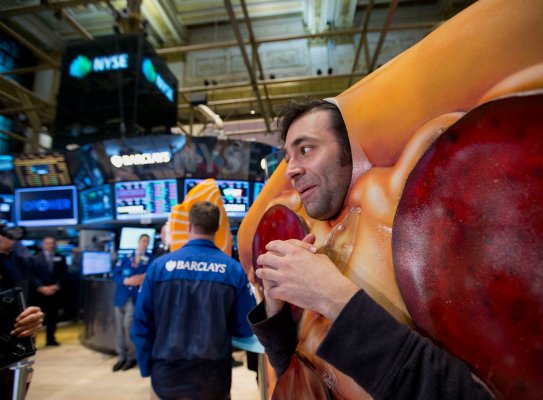