There are some movie titles you can’t say with a straight face, and Tom Clancy’s Without Remorse is one of them. It’s a title with all the swagger of a 200-page contract heavy with riders, an appellation that stands, arms akimbo, in defiance of Pee-wee Herman’s dictum “That’s my name, don’t wear it out.” Every time you say it, an angel dressed like a Navy SEAL gets its wings.

And yet, in these stressful times, a little mindless action isn’t wholly unwelcome, and Tom Clancy’s Without Remorse—directed by Stefano Sollima, who not long ago gave us Sicario: Day of the Soldado—is moderately un-terrible, a diversion that hits every beat predictably, with a mighty grunt. It takes itself more seriously than it should, but you can take it with as much seriousness as you like. Personally, I advise little to none.

The plot, adapted from—surprise!—Tom Clancy’s 1993 novel Without Remorse, provides a backstory for John Clark, one of the recurring characters in Clancy’s series of novels featuring Jack Ryan. Clark, who first appears to us as John Kelly, a Navy SEAL on a dangerous mission in Aleppo, Syria, is played by Michael B. Jordan. Shady-looking CIA guy Robert Ritter (Jamie Bell), whose gaze is as untrustworthy as one of those cartoon kitty-cat clocks with the shifting eyes, barks orders cynically. You just know he’s bad news. But John has an ally in Lieutenant Commander Karen Greer (Jodie Turner-Smith); later, this will be important. And at a certain point, back in the States, Guy Pearce appears as one of the good guys. Yay!

But nothing is as it seems in Tom Clancy’s Without Remorse. You probably already knew that, didn’t you? When John returns from his mission, tragedy befalls him in a plot point so egregiously manipulative you might be tempted to call this movie Tom Clancy’s Without Shame. He must find the perpetrator of this heinous crime, but his first step in doing so lands him in jail.

There is much discharging of automatic weapons and men going “Gaaah!” in Tom Clancy’s Without Remorse. There is also moderate discharging of self-serious dialogue like “I’m not a soldier. I’m a felon.” In the movie’s quieter moments, many of the actors are fun to watch: Turner-Smith (best known for her role in Queen & Slim) has an elegant gravitas about her, and you might wonder what she’d be able to do in a Grace Jones biopic. The terrific Georgian actor Merab Ninidze, recently seen in The Courier, plays a throwaway Russian villain, but I still perked up when I saw him. And Jordan gives his all even to this crassly commercial franchise-starter. The test of a good actor isn’t what he does with great roles but how he tackles mediocre ones, and Jordan is a pretty good actor. He takes the movie’s dialogue, most of it squat and square as a Humvee, and at least tries to give it wings. He makes John Kelly-soon-to-be-John Clark’s anguish, and his thirst for retribution, feel electric and believable, and that helps breathe some life into this pretty much business-as-usual movie. Whose title, in case you’ve forgotten, is Tom Clancy’s Without Remorse. That’s its name, don’t wear it out. 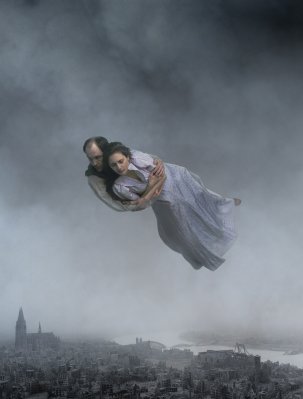 Roy Andersson's Quietly Gorgeous About Endlessness Explores Questions for Which There Are No Answers
Next Up: Editor's Pick