NBC, which paid $775 million for the rights to broadcast the Winter Olympics in Sochi, Russia, received some more bad news Wednesday: the most recognizable American competitor left in the Sochi Games, snowboarder Shaun White, has withdrawn from the slopestyle snowboarding event, which is making its Olympic debut. In slopestyle, boarders navigate a downhill obstacle course with jumps and rails.

Although White will still compete in the Games, his pursuit of a gold in both slopestyle and his strongest event, the halfpipe—White has won the last two Olympic halfpipe titles—had been one of the notable storylines going into these Games. For the first time, NBC is broadcasting primetime coverage before the opening ceremonies, and tomorrow’s slopestyle qualifying is one of the anchor events.

America’s biggest female star, skiier Lindsey Vonn, had already said she would not race in Sochi because of an injured knee, but fans can blame Olympic organizers for White’s absence. Riders have complained Russia made the slopestyle course too dangerous. That’s a bit shocking, given the safety issues that marred the Vancouver Olympics, particularly on the sliding track, where luger Nodar Kumaritashvili of Georgia tragically died after a training run. On Monday, a slopestyle medal favorite, Norway’s Torstein Horgmo, broke his collarbone during practice and was forced to withdraw from the Olympics. The course was modified overnight, but those moves didn’t help much: on Tuesday, White jammed his wrist, and Finnish snowboarder Marika Enne crash landed on the final jump, hitting her head.

In a statement to the TODAY show, White said he wanted to concentrate on the halfpipe. “With the practice runs I have taken, even after course modifications and watching fellow athletes get hurt, the potential risk of injury is a bit too much for me to gamble my other Olympics goals on,” White said.

This is all good news for Canada. Mark McMorris was the favorite going into the slopestyle event anyway: White is one less threat. If White had won both the slopestyle and halfpipe, he would have become the first Winter Olympian to win every event entered in a career, having competed in at least four events. Canadian hockey player Caroline Ouellette can now be the first to earn that distinction.

Slopestyle snowboarder Maxence Parrot also likes his chances. He fired off this tweet: 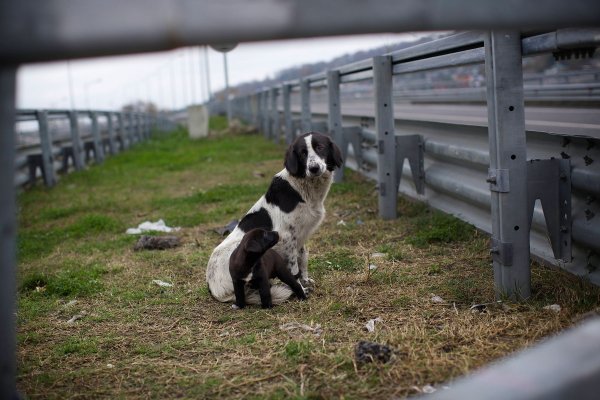 Too Little, Too Late for Sochi's Dogs
Next Up: Editor's Pick