A lot has changed in country music in the decade since the Pistol Annies, a country supergroup consisting of Miranda Lambert, Ashley Monroe and Angaleena Presley, released their first album in 2011. Bro-country swept the airwaves, followed by country gentlemen; traditionalists brought back fiddles and lap steel guitars; innovators fused the genre with pop, R&B, EDM and rap, often to the chagrin of the Nashville establishment.

But one thing hasn’t changed: women are still barely played on country radio. In 2015, radio consultant Keith Hill called women the “tomatoes” sprinkled into the male “lettuce” of country radio’s salad. A 2020 study showed that 1 in 10 songs on Billboard’s 2019 Year-End Airplay Chart was by a woman, while artists like Mickey Guyton and Amanda Shires have recounted stories of stations telling them there was only one spot at a time for female artists.

The Pistol Annies haven’t fared much better than their peers. While the trio has put out three stellar albums as a group, filled with huge singalong hooks and propulsive guitar work, none of their songs has climbed higher than #40 on the Billboard US Country Airplay charts. (The male star Kip Moore, in contrast, has achieved the feat nine times in the same time frame.) Lambert, on her own, has churned out hit after hit, but she’s a rare outlier in the genre.

Maybe it’s unsurprising, given these longstanding barriers, that the women of country would look for success elsewhere. Last year, Gabby Barrett and Maren Morris were responsible for country’s two biggest songs (“I Hope” and “The Bones”) not because of airplay, but because of massive success on streaming services. Guyton and Ashley McBryde have likewise built loyal streaming fanbases and acclaim in the face of radio silence, while smaller artists like Lauren Jenkins have turned to livestreams to connect with audiences across the world.

And in the span of a week, two-thirds of the Pistol Annies return with albums that seem barely in conversation with mainstream country radio at all. Lambert’s The Marfa Tapes (May 7) is an acoustic trio record with the veteran songwriters Jon Randall and Jack Ingram that sounds like it was recorded in one take and through a tin can. Monroe’s Rosegold (April 30) has a lot more in common with the reverb-drenched indie pop of the moment; it would fit right into popular genre-agnostic Spotify playlists like “Ethereal” and “Low-Key.” But the two records are thrilling precisely because of their nonconformity: they showcase artists who have long reveled in their rebel status chasing creativity on their own terms.

Lambert’s The Marfa Tapes is the stronger and more startling of the pair. Since 2005, Lambert has cheerfully embraced the slick richness of Nashville’s sound while also pushing the bounds of its lyrical chasteness. For this album, in the midst of quarantine, she abandoned the studio for a house in the Texas desert, where the trio recorded 15 songs live. The mistakes and banter are left in: Lambert momentarily forgets a lyric from her 2019 song “Tequila Does,” much to the delight of her bandmates. Planes hum overhead; cold cans are cracked open; sighed lyrics are rendered inaudible.

But the haggard setup lays bare both the emotional bond and musical mind-meld of three superb musicians and friends, who sound like they wouldn’t rather be anywhere else in the world. The melodies are so airtight and evocative, you might mistake them for long-lost campfire classics. The lyrics are filled with homages to lonesome Texas towns as well as unforgettable impressionistic detail: “Nobody ever left New Orleans as mad as I was/ I wrote a lipstick letter on the mirror with a bourbon buzz,” Lambert sings on the standout “Waxahachie.”

And while the songs are by no means radio-ready, they are among the best Lambert has ever recorded, and practically beg to be covered, whether rendered by street corner buskers, bedroom artists on TikTok or Western Swing bands in raucous honky-tonk joints. The album feels Edenic and, given Lambert’s stature, potentially transformative: a cultural reset on the level of demo-style masterpieces like Willie Nelson’s Red Headed Stranger or Bruce Springsteen’s Nebraska.

Monroe, meanwhile, runs in the opposite direction. The Tennessean has had nowhere near Lambert’s commercial success, but has garnered critical acclaim for her disarmingly personal storytelling and exquisitely layered production. Rosegold takes her exploratory impulses even farther; it’s an extremely sophisticated work in terms of both music theory and arrangements, buoyed by veteran crossover producers like Taylor Swift collaborator Nathan Chapman. Perhaps unsubtly, the last song on the album is called “The New Me.”

There are plenty of touchpoints here: “Siren” spills out with the clipped cadences and guitar overdrive of a Perfume Genius song, while “Gold” has the bleached strings and California worship of Lana Del Rey. Monroe has long laced references to downers into her lyrics—“I picked a good day for a recreational Percocet,” she sang on the Pistol Annies’ classic “Best Years of My Life”—and this project operates under a blissful psychedelic haze, where violins drift over tightly-wound trip-hop grooves and wandering basslines.

While Rosegold is an unlikely project to come out of Nashville, it extends a broader recent trend of prominent female country musicians exploring their artistry across genres. Kacey Musgraves recently teamed up with Troye Sivan and Mark Ronson for a synthpop remix of Sivan’s song “Easy,” while Maren Morris toggles comfortably between pop, R&B and country. And Swift, who might have been a Pistol Annie in an alternate universe, does whatever she pleases.

Of course, the center of country music remains robust. Luke Combs, Eric Church and Luke Bryan keep dominating the radio with affable odes to love, heartbreak, whiskey and small towns. But in this new streaming era, country artists are less beholden to the Nashville establishment than a group like the Chicks (née Dixie) nearly 20 years ago. Lambert’s and Monroe’s vastly different new projects, as well as those of their younger peers, reveal how the spirit of the Pistol Annies—of raw honesty, creative independence and solidarity—continues to disrupt country’s uniformity, and lead to vital, groundbreaking work. 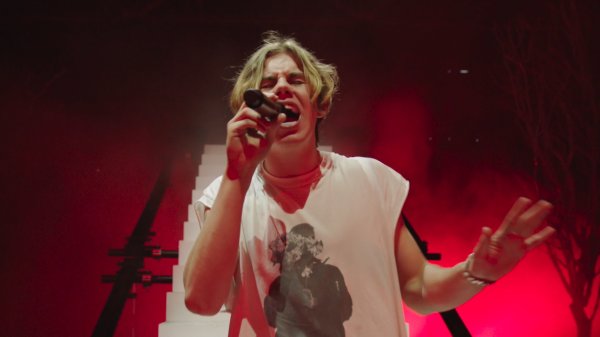 Who Is The Kid Laroi?
Next Up: Editor's Pick