‘I Pray for My Nani.’ The Survivor’s Guilt of Watching India’s COVID-19 Catastrophe Unfold From Afar

Relatives wearing personal protective equipment mourn a man who died from COVID-19 during his funeral at a crematorium in New Delhi on April 21
Adnan Abidi—Reuters
Ideas
By Aatish Taseer
Taseer, a novelist and journalist, is the author, most recently, of The Twice-Born: Life and Death on the Ganges

The Sunday before last, I awoke to find that my aunt in India had added me to a WhatsApp family chat, titled “Mama”—her mother-in-law, my 91-year-old-grandmother. I scrolled through dozens of messages from my extended family, trying to figure out what had happened. At last I came to the dreadful news: “…Mama is positive.”

My grandmother, who raised me, had tested positive for COVID-19. Her daughter-in-law, in turn, who lived with her was positive, as was her daughter, my cousin. A few days before, my great uncle, my grandmother’s last surviving sibling, had died of the virus. He, like my grandmother, had received one shot of the AstraZeneca vaccine. But it was not enough to protect him. On the seventh day, his oxygen levels and blood pressure plummeted, and his weak heart gave out. We did not dare tell my grandmother, for fear that grief would further compromise her health.

It is hard to exaggerate the hell India has become in these past two weeks. The country is reporting more than 350,000 new cases a day with daily deaths nearing 3,000. A New York Times report over the weekend, with interviews at hospitals and crematoria, showed “an extensive pattern of deaths far exceeding the official.” An epidemiologist at the University of Michigan described it as “a complete massacre of data,” believing the actual figure of deaths to be between two and five times more than what is being reported. To open any line of communication, be it social media or messaging apps, is to be inundated with heartrending pleas for oxygen, therapeutic drugs (like Fabiflue and Remdesivir) and ICU beds. Everyone I know knows someone who is sick, or dead. The sick can’t get into hospitals, the dead can’t get into crematoria. The atmosphere in my hometown of New Delhi is bordering on apocalyptic.

We, who grew up in India and moved away—India’s diaspora numbers around 18 million worldwide—are in a lesser circle of hell than our beloved friends and family back home. But it is a kind of hell for us, too—one of helplessness and guilt. If last year was defined by everyone feeling themselves in the same boat, this year is quickly emerging as a year of hideously bifurcated realities. As New York returns to relative normalcy, I find myself paralyzed by the bad news out of India. Immigration, and the feelings of exile and homelessness that can result, are hard at the best of times. One is forever balancing multiple societies in one’s head (and heart) at the same time, while still trying to forge a new life in a new place that one is lucky to be in. But when one’s adoptive home thrives, even as the home country flounders, a kind of survivor’s guilt kicks in. Far from being able to enjoy one’s safety, the temptation is to cling to one’s loyalties.

The news about my poor old Nani, alone and sequestered, in the care of a nurse, brought out a wave of anger in me. It is Prime Minister Narendra Modi’s hubris, incompetence and callousness that are largely responsible for this catastrophic second wave. In January, at a virtual Davos, he prematurely proclaimed victory over COVID-19, holding India up as an example to others, describing it as “the world’s pharmacy.” He then allowed the lion’s share of India’s vaccines to be sent overseas (the country is among the world’s largest manufacturers) while proceeding to hold vast in person election rallies and permit religious gatherings of several million to go ahead. India, which had merely got lucky the first time round, went into a death spiral. The country was woefully unprepared, woefully unvaccinated.

As people lay their dead out in the street, as they did in plague-stricken 17th-century London, what Modi cares most about is Modi. He has instructed Twitter, Facebook and Instagram to take down posts critical of his government. His High Commissioners have written furious letters to foreign publications who dare fault his handling of the pandemic. There is no more telling indication of the mental atmosphere he has engendered than the fact that not a single major Bollywood actor or cricketer has the courage to come forward and commiserate with their country engulfed in grief. For even to offer comfort to the sick and dying is to tarnish the cult of Modi. In TIME, on the eve of his re-election two years ago, I wrote: “…as India gets ready to give this willful provincial, so emblematic of her own limitations, a second term, one cannot help but tremble at what he might yet do to punish the world for his own failures.”

There is no pleasure in being right. What matters now is that the country of my origin learn its lesson from my adoptive home: when you elect a narcissist demagogue to the highest office in the land, there is untold death and suffering. When you boot him out, there can be life again. In the meantime, India will keep a long painful vigil, even as cremation, the rite by which the soul is released through fire of its mortal envelope, becomes a luxury. Everyone is praying for someone.

I pray for my Nani—and for India. 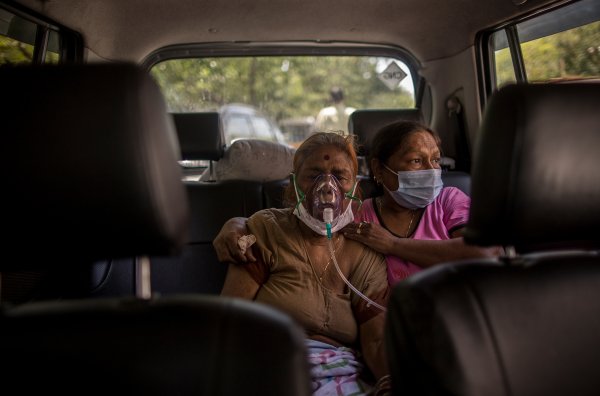 How the World Is Helping India's COVID-19 Crisis
Next Up: Editor's Pick